The Spanish economy has held firm in the first half of the year but the second half looks stormier. The information available for the months of April to June, still very incomplete, shows that economic growth was still strong in 2016 Q2. Specifically, the CaixaBank Research leading GDP indicator predicts 0.7% growth quarter-on-quarter, a minimal slowdown compared with Q1 (0.8% quarter-on-quarter). This slower rate of growth was expected and is largely due to the gradual diminishing of a series of factors that had temporarily been supporting the Spanish economy, especially tax cuts and lower oil prices. This trend will accentuate during the second half of the year as these factors will continue to lose steam while new clouds have appeared on the horizon: The UK's decision to leave the EU (Brexit) has sparked a period of strong uncertainty and financial turbulence that will lessen the already meagre European growth. For the Spanish economy we forecast more modest growth in GDP of 0.5% quarter-on-quarter in the coming quarters, bringing the annual figure to 2.8% for 2016 and 2.2% for 2017 (previously 2.4%).

The impact of the Brexit on the Spanish economy will be moderate. Spain has important economic and commercial relations with the UK so the Spanish economy is likely to feel the effect of the Anglo-Saxon country entering a recession, although the impact will tend to be moderate. The effect via the channel of trade will be modest compared with other European countries as the UK is the destination for 7.3% of exports of Spanish goods (equivalent to 1.7% of Spanish GDP), approximately half the exposure the euro area has to the UK. However, the UK is particularly important to Spain's tourist industry as it is the leading country in terms of international tourists (close to 23% of the total). It should also be noted that a significant number of Anglo-Saxon visitors have a permanent or temporary residence in Spain (800,000 people in 2015). On the other hand Spanish companies hold a large stock of foreign direct investment (FDI) in the UK (17% of all Spanish FDI, equivalent to 7% of Spain's GDP). A weak pound and worsening growth prospects for the UK could negatively affect the value of these investments, as has been reflected in the stock market losses after the referendum. The UK is also an important source of FDI for Spain: British investment accounts for 12.4% of all Spain's FDI although inflows of FDI from the UK have been very limited (around 0.1% of GDP) in the last few years. In addition to these direct effects, the impact on the Spanish economy could be greater depending on the final effect on the euro area and especially if the uncertain situation continues for some time, leading to further episodes of financial turbulence.

This financial turbulence could slow down the rate of capital inflows into the Spanish economy. One of the factors that have boosted the recovery since 2013 has been the positive capital flows received by the economy, both in the form of portfolio investment (especially public debt) and FDI. In the 12 months up to March, net inflows of FDI and portfolio investment came close to 40 billion euros, slightly below the figure for the two previous years but still very significant. Moreover it is vital to retain the confidence of international investors as the Spanish economy is highly in debt with the rest of the world (its net international debt position totalled 90.8% of GDP in 2016 Q1). The danger of a risk-off episode in global financial markets reducing investor appetite towards the peripheral countries cannot be ruled out, and this would hinder the economic recovery.

For the time being the elements supporting the economic recovery remain strong. Regarding demand, indicators related to private consumption (retail sales and consumer confidence) are still very robust, indicating that this component continues to drive domestic demand in Q2. Dynamic consumption is based on the continued improvement in financing conditions and in the gross disposable income of households (2.3% year-on-year in Q1). On the whole households managed to increase their consumption whilst also keeping their savings capacity at a reasonable level; specifically, the savings rate stood at 9.3% of gross disposable income in Q1, somewhat lower than the historical average of 9.7%.

The rate of job creation is very dynamic but wage moderation continues. The growth in gross disposable income of households in Q1 can be explained by the increase in wages (3.2% year-on-year), and this by the increase in employment (3.5% year-on-year) as remuneration per employee has remained almost static (–0.3% year-on-year). Judging by the moderate rise in wages in employment agreements in May, namely 1.1% year-on-year, wages will continue to be contained over the coming quarters and this will help to keep job creation dynamic (the rate of growth in affiliation to Social Security remains high at 2.6% year-on-year in May).

Corporate investment slows down, as is customary in this more advanced phase of the cycle. Available indicators point to the expansionary tone of business activity continuing in Q2 although at a somewhat more moderate pace than in the first three months of the year. Specifically, the business sentiment indicator (PMI) for manufacturing dipped in May and the number of businesses in industry fell slightly in April (–0.7% year-on-year). Nonetheless the increase in industrial orders from abroad (6.0% year-on-year, cumulative over 12 months), both from the euro area (7.3% year-on-year) and from other destinations (4.4% year-on-year) augurs an improvement in industry over the next few months. With regard to the services sector, on the whole indicators also point to activity remaining dynamic. The PMI improved slightly, rising above the average for Q1. Another indicator that reflects how the Spanish economy is gradually entering a more mature phase of the economic cycle is industrial capacity utilisation, which stood at 78.2% in 2016 Q2, slightly above its historical average since 1980.

Inflation will soon reflect the cyclic situation of the economy. The economic recovery started over three years ago now but inflation is still in negative figures. Although this situation is largely due to the slump in oil prices in the last year, the lack of inflationary pressure in a context of high economic growth could seem surprising. But this situation is about to change. In June inflation rose by 0.2 pps to –0.8% and is expected to start on a rapid upward trend in the coming months as the base effect of falling oil prices disappears. Similarly, after a bad patch in May, the core CPI will return to its slightly upward trend thanks to the constant dynamism of private consumption.

The adjustment of the general government deficit is still pending. The budget executed up to April places the deficit (excluding local government corporations) at 1.2% of GDP, 0.1 pps higher than the figure posted last year. Although the central government and autonomous communities have improved their balance sheets, the Social Security surplus is still shrinking (see the Focus «The sustainability of the Social Security accounts: a job to be done» in this Monthly Report). The lack of adjustment of the national accounts in the first half of the year suggests that, in order to achieve the 3.6% public deficit target in the Updated Stability Plan presented by the government, measures will have to be taken in the second half of the year.

Bank credit continues to recover and doubtful loans to fall. The breakdown of credit in 2016 Q1 shows that an increasing number of segments are starting to record positive year-on-year rates of change. In addition to consumer credit and loans to the agricultural sector, which started to grow in 2015, in Q1 this was also the case of loans to industry, yet another sign that credit is supporting the recovery in corporate productive activity. The NPL ratio also continued to fall in all the segments although it should be noted that the figures for construction and development loans are still very high. This trend will continue thanks to the expansionary policies of the ECB, boosting consumption and investment. 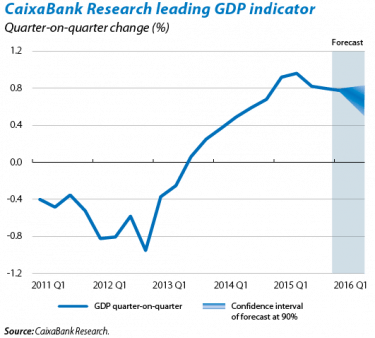 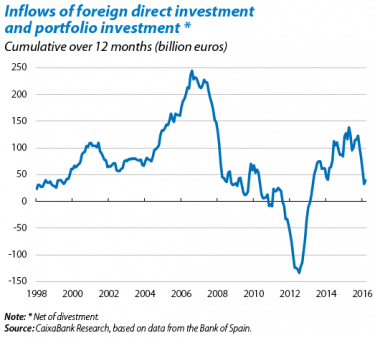 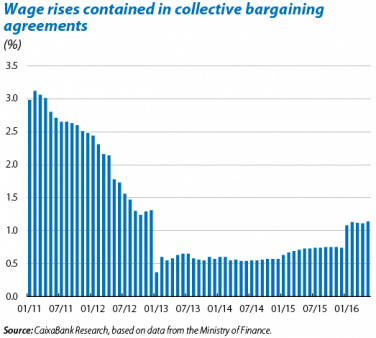 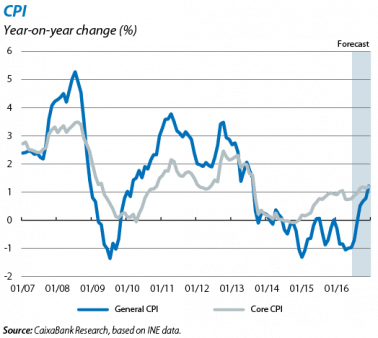 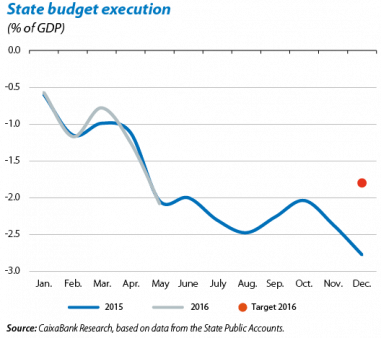