Strong and continuing pressures on the financial system

Looking at the evolution of bank shares in the stock markets, it can be deduced that, over the last few years, they have been especially gripped by the international crisis. Since 2008, when the financial crisis originating in the United States erupted in Europe, bank stocks have performed worse than the average (Eurostoxx Index). There were signs of a recovery at some points in 2009 but, in 2011, the difference between banks' and the average performance has widened, as can be seen in the graph below. The risk premium of the banking sector has also shot up and the sector's Credit Default Swaps (CDS) went above 300 basis points in the summer of 2011. Most of the banks have had their rating downgraded by rating agencies.

Many events that have occurred regarding the financial system help to explain this trend and the complex perspectives. On the one hand, the economic situation is having a direct effect. A weak macroeconomic environment affects business volumes and, particularly, the flow of credit. Moreover, lasting high unemployment rates influence consumption and the doubtful debt rate. This, together with the trend in property prices, means that doubtful loans related to the real estate sector continue to damage banks' balances, especially in those countries with a real estate bubble. In fact, the stress tests carried out by the European Banking Authority (EBA) are mainly aimed at making credit exposure more transparent, as well as requiring higher levels of capital to cope with deterioration forecasts and potentially risky economic scenarios. In this respect, countries such as Spain and Ireland stood out due to their high exposure to real estate. In Ireland, this situation, together with other factors, led to the country's bail-out and that of its financial system and, in Spain, to an unprecedented restructuring which is still ongoing.

But the international banking scenario is even more complex since, for the rest of the countries, exposure to sovereign debt has turned out to be a great risk. The levels of public indebtedness in some euro area countries are very high and, given the lack of clear political commitment in the euro area, these are creating doubts and tensions in the financial markets. The risk premium has, therefore, reached historically high figures. In Greece, it has risen to 3,000 basis points and in Portugal it stands at around 1,200 basis points. In Italy and Spain it has often gone way above 400-450 basis points and France is not exempt from this tension either, with levels close to 200 basis points.

In general, the financial system's exposure to euro area sovereign debt is high. The main problem is the bad perception of solvency, leading to tension in debt markets and real liquidity problems for financial institutions, beyond the rising cost of funding. Because of this, the EBA has also carried out a detailed analysis and is demanding higher levels of capital depending on the deterioration of the sovereign debt on institutions' balance sheets.1 For example, while French and German institutions were not among those mentioned in the first stress tests on credit exposure, they stand out in the new analysis due to their high sovereign exposure. Consequently, either due to credit exposure or to sovereign exposure, financial systems from most of the European countries are under huge tension.

The capacity of institutions to generate profits is also being significantly reduced due to business tensions: less revenue and higher costs resulting from greater risk and more expensive financing. Therefore states and central banks have had to adopt new measures to support the financial system.

Within this already difficult context, numerous regulatory proposals are being planned, aiming to achieve more efficient, better capitalized, less in debt and larger instiutions in the medium term. And this is good for the financial system as a whole, for the economy in general and for customers and citizens. However, higher requirements, constant regulatory changes and the current lack of specific details are generating uncertainty and pressure in the short term.

Most of the measures that have been proposed/adopted are related to capital. Everything started with the Basel III proposal to increase the level of capital and toughen up its definition but with a long implementation schedule, which in practice markets are anticipating. Moreover, the stress tests and markets have increased demands, up to the 9% of Core Tier 1 required in the last analysis developed by the EBA. And different criteria have been applied by different national supervisors, individually and independently. In Spain, in February 2011, a minimum of 8%-10% for a new concept of capital, namely principal capital, was demanded. In Austria, the application of Basel III has been brought forward to January 2013 and additional buffers of 3 percentage points will be required. In the Netherlands, United Kingdom and Switzerland capital requirements have been increased for systemically important institutions.

As a result of these proposals, the procyclicality of capital requirements is increasing, as well as uncertainty regarding future levels and definitions, forcing banks to make an additional effort to retain profits and have access to capital markets, thereby restricting their capacity to grant credit.

Apart from capital, there are regulatory initiatives of all kinds. Among others, changes have been proposed in the accounting of financial assets, as well as adjustments in the calendar of provisions and/or duties on financial transactions. Moreover, in Anglo-Saxon areas, there are plans to separate investment banking from retail banking. In Austria, subsidiaries in Eastern Europe must maintain a ratio of credit over deposits below 110%, forcing them into divestments. And, to give one last example, a strict system was implemented in Denmark to liquidate institutions with private sector involvement, which led to the bankruptcy of two institutions and generated doubts regarding the system.

In summary, the pressure on the financial system comes from both structural tensions related to business as well as tensions due to the need to comply with new regulatory requirements. As a result, between 2008 and 2010, European states have been forced to restructure or liquidate up to 37 financial institutions in 14 countries. Moreover, European states have allocated 1.1 trillion Euros to grant debt issues by financial institutions and a further 0.5 trillion Euros to recapitalize them, as well as other forms of support. But the situation is clearly not the same for all institutions. Although no-one is free from pressure, depending on the business model and especially their ability to manage and anticipate it, some institutions are handling the situation better and maintaining their ability to grant the flow of credit, a fundamental mission of the financial system to boost the economy. 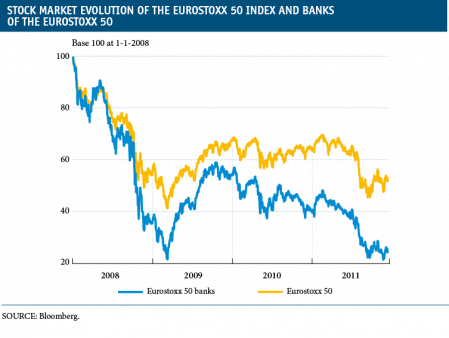 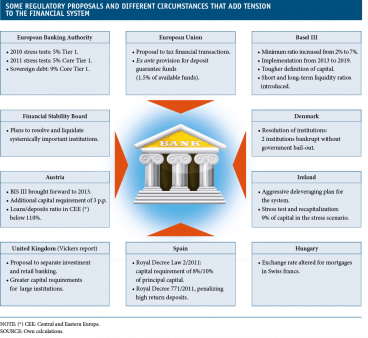