The structural deficit: a benchmark variable

The last quarter of the year is approaching and European governments are starting to draw up their budgets for 2015. In the last few years, their design has been conditioned by the European Commission's new governance policies with more emphasis on correcting the structural component of the public deficit.

It therefore seems vital to monitor the structural balance but there are limitations, the greatest being the problem of measuring this factor. The structural fiscal balance is the one an economy would have if it used all its production, capital and labour factors without any tension occurring in prices; in other words, if its actual GDP were the same as its potential GDP. Consequently, to measure the structural fiscal balance of an economy, first we must estimate its production capacity, a variable that has actually been revised on several occasions over the last few years. The financial crisis has highlighted the fact that the technical statistics used overestimate the proportion of observed GDP that was classified as potential GDP. During the boom years, the part of growth driven by factors unsustainable in the long term was not distinguished while, during the crisis, the downward revision of the economy's growth potential was, in many cases, exaggerated.

For the trend in the structural fiscal balance to be used as a benchmark variable in the design of fiscal policy, the European Commission has been forced to revise the methodology used to estimate both potential GDP and the structural balance. The aim has been, precisely, to achieve estimates that are less susceptible to the ups and downs of the economy and therefore more robust and long-term. The impact of this new methodology on the estimates of potential GDP and the structural fiscal balance varies from country to country; while the changes have been barely noticeable in a large number of these, such as Germany and France, in others such revisions have been significant. This is particularly the case of Ireland, Cyprus, Portugal and especially Spain. In the specific case of Spain, this new methodology had led to a 2.5 p.p. increase in potential GDP for 2013, resulting in a 1.2 p.p. reduction in the structural deficit for the same year, down to 2.8% of GDP. In fact, this new calculation reveals that the adjustment achieved in the structural deficit between 2010 and 2013 was 4.3 p.p., considerably more than the previous estimate (3.3 p.p.).

In short, the efforts being made to improve methods to estimate potential GDP are undoubtedly good news, particularly if we take into account the growing importance of the structural balance in the design of European fiscal policy. However, we must be aware of the uncertainty surrounding this variable and not forget that, ultimately, our priority must still be to reduce the high level of public debt. 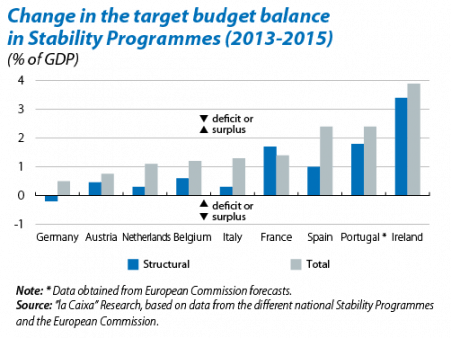 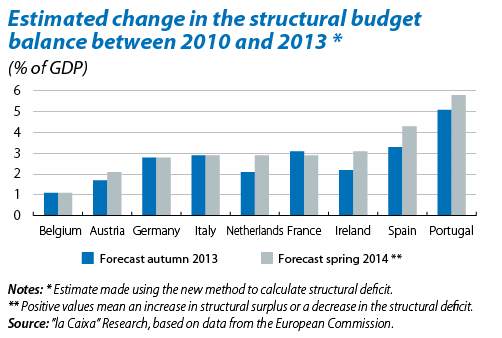