On the sustainability of the pension system

This situation is the result both of the fall in social insurance contributions, which is more temporary in nature, and the rise in pension expenditure, which is more structural and due to the larger number of pensioners as well as an increase in the average pension payment. An example of the ageing of country's population is the fact that the number of pensioners went from 7.7 million in 2008 to 8.4 in 2014 Q3, while the size of the average monthly pension also rose from 725 euros in 2008 to 877 euros in 2014, going above 1,000 euros in the case of contributory retirement pensions (see the first graph).

The recently approved reforms of the pension system should make the system more sustainable. Specifically, 2011's reform helps to contain pension spending by progressively raising the retirement age from 65 to 67 and the number of years included in the quota from 15 to 25. Given that this will be implemented gradually, the impact will take some time to be seen.

2013's reform also introduced elements that should help to rebalance the Social Security accounts. Firstly, it adds a generational equity factor that takes life expectancy into account when calculating pensions (implemented as from 2019). It also alters the annual revaluation of pensions which will start to be applied as from 2015. This adjusts the revaluation of pensions according to Social Security's budget flows and the economic cycle, attempting to achieve equilibrium in the medium term between revenue and expenditure, although it also sets a minimum increase (0.25%) and maximum increase (inflation + 0.5%). For 2015 the figure resulting from applying this Pension Revaluation Index to balance revenue and expenditure would be below 0.25% according to the calculations of the AIReF (Independent Authority for Fiscal Responsibility). The government has therefore applied the minimum legal increase (0.25%), something which, given the economic outlook over the medium to long term, is likely to be repeated over the next few years.

The expected medium-term trend (2015-2020) for Social Security revenue and expenditure shows the gap gradually closing (see the second graph). The mechanisms adopted therefore result in some adjustment. However, the AIReF has warned that the government's revenue forecasts for this period are too optimistic (those for expenditure appear to be more realistic as they are easier to predict). Moreover their calculation, which models the trend in company contributions as well as the number of pensions and the retiree substitution rate, reveals that additional revenue will be required equivalent to 1.0% of annual GDP during 2015-2020.

In summary, although the reforms have helped to make the system more sustainable, the gap between revenue and expenditure has not been entirely wiped out. The government expects to receive more revenue by introducing payments in kind, a new direct settlement system (CRETA) and by tackling fraud (measures contained in the 2015 Social Security Budget). The ball is still in play. 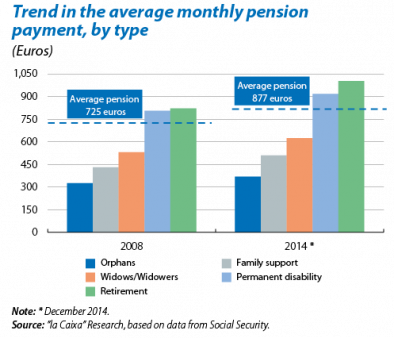 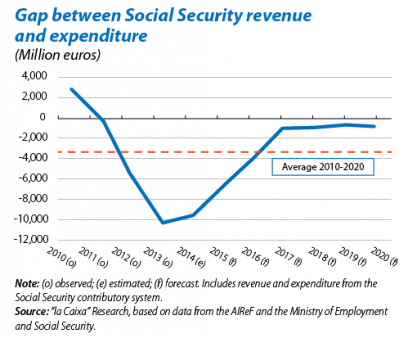