The sustainability of the Social Security accounts: a job to be done

2015 was a very good year for Spain in terms of economic activity: GDP grew by 3.2% and more than half a million jobs were created. However, the economy's good performance was not enough to resolve the Social Security's budget problems: its deficit worsened by 0.1 pp compared with 2014, to 1.26% of GDP, exceeding the target of 0.6%. As the deficit does not look like correcting itself to any great extent in the medium term, this situation warrants discussion.

The Revised Stability Programme (Actualización del Programa de Estabilidad or APE) presented by the government in April sets a new deficit target for Social Security of 1.1% in 2016 while the target set a year ago was 0.3%. Moreover, it is particularly worrying that the APE expects Social Security to continue recording a deficit of 0.7% in 2019 (see the first graph), a year in which the Spanish economy should have closed its output gap.1 The fact that this deficit is now chronic, persisting even during the expansionary stage of the cycle, highlights the structural problems affecting Social Security. Neither do the deficit targets presented seem to be achievable without additional measures being taken, as warned by AIReF.2

Consequently, all the evidence seems to suggest that Social Security will continue in deficit in the medium term. In the last few years this deficit has been financed by the Reserve Fund. This fund was set up in 2003 and holds the assets (basically Spanish sovereign debt) resulting from investing the Social Security surpluses between 2003 and 2008. The objective was well-defined: to be able to pay out contributory pensions when there is a prolonged deficit in Social Security. Initially, use of the Fund's resources was limited to 3% of the total aforementioned expenditure per year.3 However, this limit was exceptionally suspended as from 2012 so that, between that year and 2015, a total of 47,201 million euros was used, representing more than 70% of the assets held by the Fund in 2011.

At the end of 2015, the Reserve Fund contained 32,481 million euros. If the exception to the 3% limit is extended over the coming years and the Social Security deficit continues to be financed by the Fund, this will run out by 2018. If, on the other hand, this suspension of the 3% limit is eliminated as from 2017, the Fund will shrink more gradually (see the second graph). However, in that case the Social Security deficit would have to be financed directly by transfers from central government and, in fact, the State Budget for 2016 includes the possibility of enlarging pensions deemed non-contributory, financed by transfers from central government.

In any case the crux of the matter lies in the Social Security deficit per se and not so much how it is financed. It is therefore vital to tackle the structural imbalance of the Social Security system and take the necessary decisions to correct this without delay.

1. The APE estimates that GDP will exceed potential GDP by 2019; i.e. the output gap will have closed, which is the difference between the observed GDP and the potential GDP if all input factors were used.

3. This expenditure includes the payment of contributory pensions and the costs resulting from their administration. 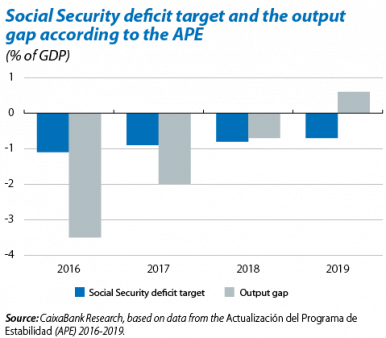 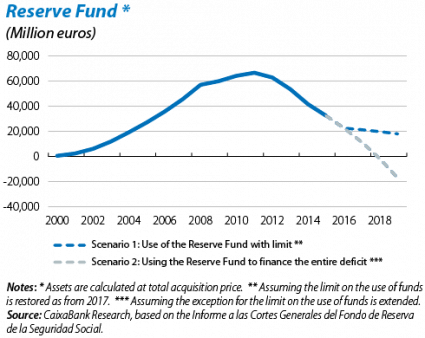