2016 is turning out to be an exceptionally good year for foreign tourism in Spain. 60 million tourists arrived between January and September, 10.1% more than in the same period in 2015. These figures place Spain among the top three countries in the world in international tourist arrivals (together with the United States and China). Another figure that clearly shows the sector is going through a good patch, and the importance of this for the economy as a whole, is the revenue from foreign tourism, which will account for almost 5% of GDP in 2016.

The impact of foreign tourism in Spain is relatively high when compared at an international level:1 the sector contributes 7.7% of GDP, a larger share compared to other countries of similar size and supply, such as Italy (2.8%) and France (2.6%), although small when compared to countries such as Portugal and Greece, where the contribution is 10.8% and 11.2%, respectively (see the first graph). The tourism sector’s weight highlights the need to examine its most recent trends and outlook for the future.

In the last year foreign tourism in Spain has grown more quickly than in countries with a similar tourist appeal. While the overnight stays of foreign tourists in Spain have accelerated in 2015 and 2016, these have slowed down in Italy (perhaps the most comparable destination) and in Greece, where growth over the 12 months up to June was around 0.5%. Croatia has a similar pattern to Spain but is starting from a much lower level. So can we expect this boom to continue?

The good results seen in 2016 are largely supported by the high competitiveness of Spain’s tourism industry. Spain topped the World Economic Forum’s global ranking in 2015 (8th in 2011 and 4th in 2013), above France (2nd), Italy (8th), Greece (31st) and Croatia (33rd). Regarding Italy, Spain has consolidated its advantage in terms of price competitiveness and especially in better transport and service infrastructures.

On the other hand it should also be noted that European tourist destinations, and particularly Spain, have benefitted from external factors, for example the geopolitical unrest in destinations in North Africa and the Middle East, such as Egypt and Tunisia, which are pushing the tourists who would have visited these regions towards safer destinations such as Spain and Italy. As this unrest is unlikely to calm down in the near future, such external factors suggest the good season of 2016 may continue. This observation needs to be qualified, however. If we examine the growth in the number of tourists received by Spain by country of origin, we can see that the arrival of British tourists has accelerated (11.8% year-on-year in the last 12 months up to August) whereas the number of German tourists has declined (2.5%).

In this respect, we should note the greater sensitivity of British tourism to the country’s domestic economic conditions. Specifically, in the case of British tourists there is a high correlation of tourist arrivals by country of origin with GDP growth in the country of origin while the correlation is more moderate in the case of German or French tourists. With regard to British tourism, we should add that although it accounts for 23.5% of the total, British tourists contributed 35% to the increase in tourism revenue in the 12 months up to August (see the second graph). Given such figures, there is no doubt that Brexit represents a significant risk factor for Spain’s tourist industry.

1. Data from Oxford Economics and from the World Travel & Tourism Council. 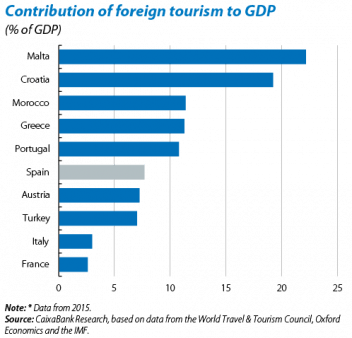 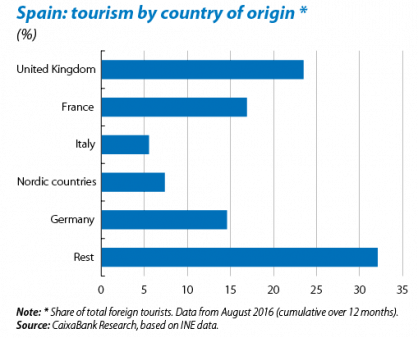