Is the trend in world trade changing?

International trade was one of the hardest hit during the years of crisis but it soon recovered, providing an important source of growth for the world economy. However, in the last few quarters trade figures have started to weaken, which is slightly puzzling since the main developed countries are busy consolidating their recovery and in the emerging economies, although the situation is very different for each country, a widespread slowdown is not expected.

This slowdown in trade is not alarming but it is certainly noticeable and widespread: it can be seen both in the main developed countries and in the emerging economies. Of note is the slowdown in exports taking place in the US although adverse weather conditions are largely to blame in this case. Between 2010 and 2013, the average quarter-on-quarter growth rate for exports of goods and services stood at 1.3% while in 2014 Q1 it fell by 2.3%.

The trend in exports is quite volatile in the short term and the figures from the last few months may merely be part of the erratic movements that often occur. However, in some countries the growth rate of exports has altered its usual pattern over the last few quarters. Historically, the growth rate for exports, in real terms, has always been higher than for GDP. Gains in efficiency provided by the greater integration of a country's production in the global value chain were crucial to sustain growth in activity. However, in 2012 and 2013, at a global level, the growth rate for exports was almost the same as for GDP, an almost unprecedented phenomenon in the last 30 years.

The main reasons for this change in trend lie particularly with the US and China (the world's second and first exporters, respectively). In the case of the United States, this has been interpreted as a temporary situation as it is due to the strong upswing in domestic demand in the last few years once confidence in the economy's growth capacity improved. In the case of China, however, we might be looking at a longer-term phenomenon: the change in model being promoted by the new government to rebalance sources of growth, with a greater emphasis on domestic demand. According to IMF forecasts, this will mean that China's growth in exports will be very similar to its growth in GDP or even lower over the next few years.

Apart from China, and the temporary ups and downs typical of the series of international trade, it is hard to believe that international trade will stop being one of the main ways via which global gains in productivity, and therefore growth, are achieved. But we should keep a close eye on developments. 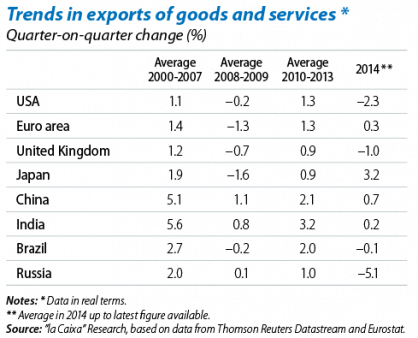 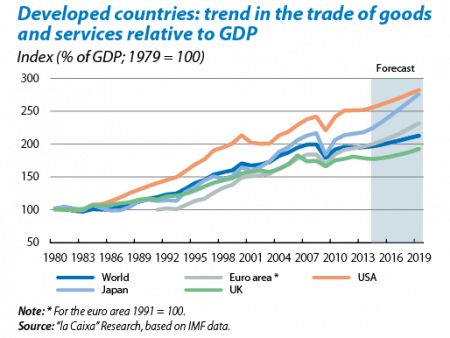 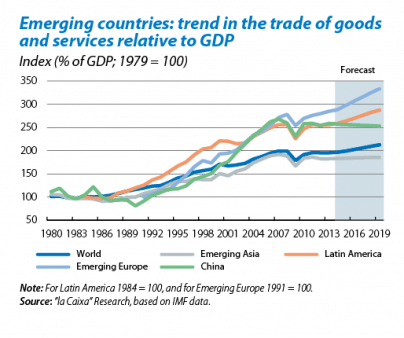