The US: to invest or not to invest, that is the question

In the last US presidential election, the stance on key issues of the Republican candidate (and now President) Trump and of the Democrat Clinton had little in common except for the need to increase spending on infrastructures. In fact, there appears to be widespread consensus regarding this need in the US. Some economists argue that more and better infrastructures could offset the country’s lower growth in productivity. Beyond economic interests, some simply wish for pothole-free roads and bridges in good shape.

And the latter are not without reason. Around 25% of US roads are in a poor condition, more than 40% of its highways are heavily congested, a problem that has increased by 36% in the past six years, and the country has one of the worst trends in infrastructure quality among the advanced economies.1

According to the American Society of Civil Engineers (ASCE), there is a wide gap between planned and optimum infrastructure funding over the next 10 years. Although the ASCE may obviously have a vested interest in exaggerating the need for more infrastructure funding (as it benefits them directly), the estimated 144 billion dollar annual shortfall (equivalent to 0.9% of GDP) is at least revealing. In spite of the considerable rise in federal expenditure on improving and maintaining roads promoted by the Obama administration,2 this shortfall has been a problem for some years now and entails a significant economic cost: 147 billion dollars in 2015 according to the ASCE, due to higher spending on vehicle repairs, longer travel times, less safety for citizens and environmental costs.

From a strictly economic point of view, the benefits of investing in infrastructures can outweigh the costs. Of course, provided this investment is in projects that boost the country’s production capacity. Numerous studies analysing and quantifying the effects on productivity and economic growth of fiscal measures aimed at increasing infrastructure investment in the US conclude that the effects on growth can be broadly positive, both in the short and long term. In the short term, higher spending stimulates demand while in the long term it improves production capacity (i.e. it affects supply).

The multipliers for the US case in particular, based on empirical evidence from the 1950s to the 2000s, range from a very modest 0.4 to a considerable 2.2.3 For example, a multiplier of two means that, for every extra dollar spent on improving infrastructures, GDP increases by two dollars in the medium term.

One concern related to increased spending is the potential impact on public debt. This is particularly relevant in the US, where the public sector foots the bill for most infrastructure projects (the local, state and/or federal government) and where public debt is already at a high 104.8% of GDP. But in this respect, once again, a large number of studies conclude that the public-debt-to-GDP ratio might actually fall, as the increase in debt due to larger fiscal deficits would be more than offset by the higher GDP. This is in line with the estimate of relatively high fiscal multipliers.

Infrastructure investment therefore seems to have helped the US to grow in the past. Nevertheless, some of these positive effects could be undermined by certain distinctive features of the US economy today. The labour market’s limited slack is one such case in point. If the labour market is close to full employment, fiscal policy would have more of an impact on inflation and much less on growth. An unemployment rate below 5% and 2.5% wage rises suggest that the US labour market’s slack is increasingly limited. In this case, and according to various analyses including the IMF World Economic Outlook for 2014, the fiscal multiplier would be around one, clearly far from the aforementioned two.

There is a flaw to this argument, however. Increased investment in infrastructures could particularly help out those people facing significant structural employment problems after the economic-financial crisis of 2008: low qualified, middle-aged men who, discouraged by the crisis, have left the labour market but could be readily employed in the construction sector.

Another factor that could lessen the benefits of greater investment in traditional infrastructures is the rate of technological progress. The world is changing, and quickly. Can the most representative infrastructures, which have provided the US with solid growth for the last 50 years, remain effective in today’s knowledge economy? Is improving the state of the roads, even though they are clearly in a poor condition, more crucial than ensuring a wireless broadband connection is available across the country to boost the use of drones or driverless cars? This new technological situation certainly raises doubts as to the most appropriate infrastructures and how much one investment project or another might affect productivity.

In short, the public sector has an important but difficult role to play in the new US economy. Its investment can help to develop the industry of the future. But deciding exactly how much should be spent and on what has become a lot more complex given the country’s current business cycle stage and the uncertain environment.

1. According to data from the US Federal Highway Administration, the IMF and the American Society of Civil Engineers (in a study by the Economic Development Research Group).

3. See Reichling, F. and Whalen, C. (2015), «The Fiscal Multiplier and Economic Policy Analysis in the United States», Working Paper 2015-02 (No. 49925) for a summary of different studies on fiscal multipliers. And Leduc, S. and Wilson, D. (2013), «Roads to Prosperity or Bridges to Nowhere? Theory and Evidence on the Impact of Public Infrastructure Investment», NBER Macroeconomics Annual, 27(1), 89-142, for a specific example of highway investment. 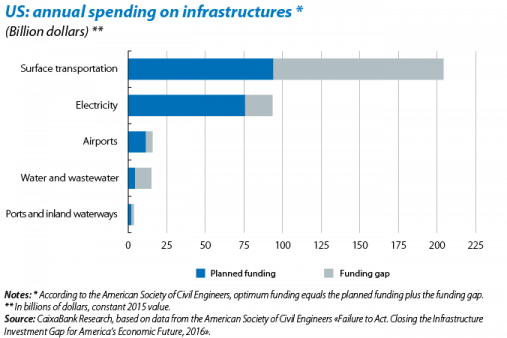 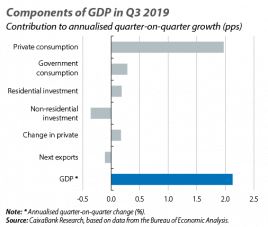 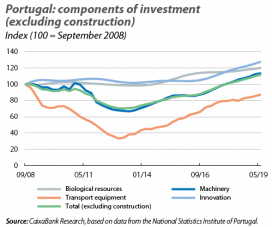