The value added of exports

Exports have been one of the keys to the Spanish economy's incipient recovery. But are we measuring exports properly?

What is the problem? Suppose it is necessary to complete three processes before selling a product: obtain raw materials, process them and make the end product. Let us assume, for example, that there are four countries: A, B and C carry out each of these activities and country D consumes the end product. Country A obtains the materials and sells them to country B for 2 euros. Country B processes the materials and sells them to country C for 26 euros. Country C finishes the production and sells the product to country D for 72 euros, and the latter consumes it. In this example, the exports from country C are 72 but the value added is only 46 (72 of the sale price less 26 added by countries A and B). We therefore need to use the value added of exports to really know the importance of the foreign sector for an economy.

The last World Investment Report by the UNCTAD calculates, for 2010, the relative weight of domestic value added in the exports of each country. In the previous example, the percentage for country C would be 63.9% (= 46/72). So how does Spain do compared with the main exporters in the world? The relative weight of domestic value added in Spanish exports is 72%. In other words, for every 100 euros that Spain sells abroad, 72 are using Spanish work and capital and 28 are using foreign factors. Spain is well placed compared with other exporters in the European Union. The domestic value added of German exports is only 63% and in France this figure is 69%, while in Italy it is 73%.
If we compare with the USA (89%), Spain is doing worse; there is therefore room for improvement. Countries that export raw materials have a very high figure by definition (country A in the example has a percentage of 100%). This would explain the figure of 86% for Saudi Arabia.

This ranking is important but we also need to determine whether we can translate the good performance by Spain's exports into similar increases in value added. OECD figures provide us with a preliminary estimate between 2000 and 2009 (latest data available). Note that Spanish exports of goods and services grew by less than German  exports. However, the domestic value added of Spanish exports grew more than in all the countries selected (including Germany). We can therefore conclude from this study that the foreign sector is even healthier than suggested by the export figures alone. 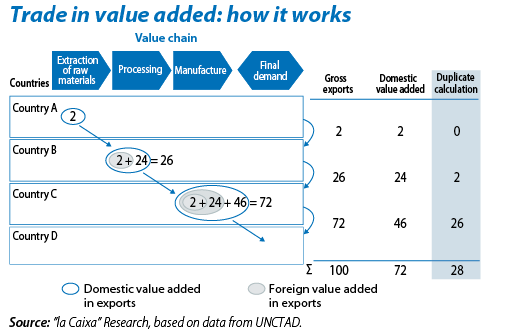 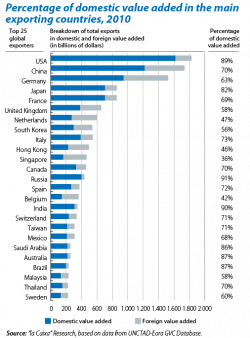 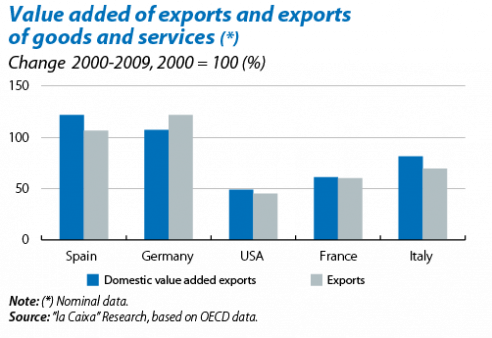