The seriousness of Brazil's recession has taken Brazilians and foreigners by surprise: after falling by 0.7% quarter-on-quarter in Q1, the country's GDP plummeted by a notable 1.9% in Q2. The reasons for this bad performance are explored in a recent Focus:1 Brazil is facing the challenge of correcting significant macroeconomic imbalances in a context of falling activity and difficulties in implementing economic policy. Here we focus on analysing the possible economic impact on Latin America of a shock in its largest economy, equivalent to 37% of the region's GDP.

One fundamental channel for contagion is trade. The most exposed countries are those which export most goods to Brazil: Paraguay, Bolivia, Argentina and Uruguay, which send between a fifth and a third of all their exports to the South American giant. However, to examine the economic impact more accurately we need to relate these countries' exports with their economic size, differentiating between the more vulnerable situation of Bolivia and Paraguay (whose exports account for 11.7% and 9.7% of their national GDP, respectively) and that of Uruguay (3.3% of GDP) and Argentina (2.6% of GDP).

Bolivia and Paraguay are therefore the most exposed to a shock from Brazil. Nevertheless, the extent of this risk also depends on the kind of goods traded and these two countries are in very different situations: while Bolivia exports natural gas and oil, products whose demand, although partially inelastic, will fall given Brazil's decrease in consumption and investment, Paraguay exports agricultural commodities which, in principle, are staple goods and can also be relocated much more easily internationally (although this last factor has diminished slightly due to the current context of a drop in global demand for commodities). In summary, the balance of commercial risks is more worrying in the case of Bolivia (due to its extensive trade and the composition of the goods traded) but somewhat less in Paraguay (the degree of trade is partly offset by the composition of the goods).

A second potential channel of contagion is financial. With regard to Latin America's investments in Brazil, the stock of foreign direct investment from Uruguay is equivalent to 7.9% of the country's GDP, that of Chile represents 3.5% of its national GDP and Mexico's investment is equivalent to 1.1% of its GDP. On the other hand, investments by Brazilian firms in 2013 represented a stock equivalent to 5.2% of GDP in Uruguay, to 2.2% of GDP in Paraguay and to 1.6% in Peru, while the region's remaining countries are much less exposed.2 We can therefore conclude that the effect Brazil's recession might have on Latin America as a whole could be classified as small to medium, as Latin America is not particularly integrated and its two main engines (Brazil and Mexico) are not closely related at all.

Nonetheless this assessment must necessarily be cautious given the fact that Brazil's recession is occurring at the same time as a second shock (in commodities) and tougher financing conditions. We should also remember that, although the economic channels (and those financial channels most closely linked to economic performance) are relatively small and limited to just a few countries, contagion via other means could entail a greater risk. In particular, if international investors got rid of their investment positions in Brazil (a reasonable reaction in response to the country's worsened outlook), a similar, albeit partly irrational response could occur in other economies.3

Can we quantify the possible total effect of these different channels? According to a recent study by the IMF4 that evaluates how much Brazil's shocks are passed on to the rest of the region, the overall impact would be particularly strong in Paraguay (every 1 pp drop in Brazil's GDP reduces Paraguay's GDP by 0.9 pps) and have markedly less of an effect, although still appreciable, on Argentina, Bolivia and Uruguay (in the order of 0.25 pps).

1. See «The deterioration in Brazil's outlook: a bad patch or something more deep-rooted?», published in MR05/2015.

2. Portfolio investments are not taken into account because no information is available on their countries of origin and destination. Nonetheless it should be noted that flows of foreign direct investment account for 90% of capital outflows and 60% of capital inflows.

3. This channel is explored in more detail in the Focus «Brazil awakens the spectre of financial contagion in Latin America» in this Report. 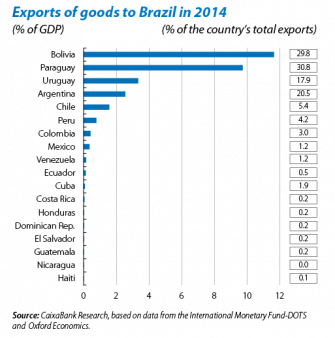