Brazil: a rough patch in the short term, significant challenges in the long

The Q2 GDP figure came as a disappointment to even the most pessimistic of forecasts: down by 0.6% quarter-on-quarter. This means that Brazil is technically in recession (conventionally defined as when GDP falls for at least two consecutive quarters) and has also pushed the year-on-year rate into negative terrain (specifically –0.9%). It is true that the smaller number of days worked (due to the holidays given to follow the World Cup) is a temporary factor that has affected this figure but even after adjusting for this effect it is estimated that the economy will have shrunk by around 0.4% quarter-on-quarter. The breakdown by demand component did not allay concerns either: both consumption and investment fell, leaving exports as the only source of dynamism.

The situation is complicated due to two crucial issues. On the one hand, the persistence of inflationary tensions: in July inflation stood at 6.5% year-on-year and will probably soon exceed the upper limit of the target set by the Central Bank of Brazil, limiting its capacity to lower the reference interest rate or apply other expansionary monetary measures. On the other hand, political uncertainty is high. At the time of writing, the presidential and legislative elections of the 5 October have yet to be held. These are fiercely contested and although the incumbent president, Dilma Rousseff, seems to have a slight advantage, she will probably have to go to a second round and suffer changes in her parliamentary majority.

Given this situation, the question is whether such complex political and economic developments are going to affect growth expectations in the short and long term. Available data point to a weak Q3 but the likelihood of positive quarter-on-quarter growth. This slow exit will probably continue throughout the last part of 2014 and early part of 2015. Should this scenario come about, growth in 2014 would reach 0.5%, certainly a sharp slowdown compared with 2013 when the economy grew by 2.5%. In 2015 growth could reach around 1.4%, although this forecast is quite uncertain and will depend on the economic policy applied by the new government.

In fact, as 2015 progresses, the key factor will not be the current lethargy so much as the start-up of the new government and the expectations generated by its economic policy. The previous legislature was not overly ambitious in reform terms so it is now vital to speed up policies to improve the environment in which companies operate. The list of chores is well-known: reduce the cost of regulatory compliance, simplify administrative procedures, rationalise public sector activity, improve the tax system and strengthen social cohesion. Other structural changes, such as continuing to invest in infrastructures, should also intensify over the coming years in order to reduce the production bottlenecks the country is bound to encounter as soon as it gets back to rates of growth enjoyed in previous years. If these reforms are implemented and economic policy become more business-oriented, Brazil will be more than able to regain the confidence of international investors and local business in the country's potential. And its potential is great. 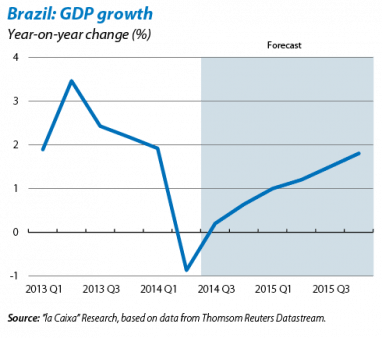 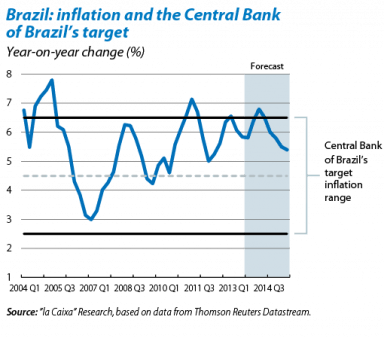