The car, a key sector facing an uncertain future

• In Europe, the automotive sector makes a key contribution to economic activity (both directly and through the spillover effect) and has a strong export component.

• Therefore, in the context of a slowdown in global trade, the sector has held back euro area growth in recent quarters (accentuated by the regulatory disruptions in the sector).

• In the future, the environmental issue and pollution problems in large cities will lead the sector to replace internal combustion engines with electric motors. However, to overcome this challenge, significant technological bottlenecks must be overcome.

The euro area economy slowed down in the second half of 2018 and the main institutions have lowered their growth forecasts for 2019. As an example, whereas in April 2018 the IMF predicted GDP growth for the euro area of 2.0% in 2019, in its most recent forecast (April 2019) this has been reduced to 1.3%. As we have shown in previous analyses,1 this moderation is partly due to the troubles in the automotive sector, which is adjusting to the new vehicle emissions protocol that came into force on 1 September 2018. In fact, our estimates indicate that the disruption in the automotive sector has imposed a major restriction on growth: without it, quarter-on-quarter GDP growth would have reached 0.5% in Q3 2018 (compared with the observed figure of 0.2%). In view of its importance, we must understand precisely how temporary the disruptions affecting the automotive industry really are and assess the prospects for the medium term.

The importance of the sector in the euro area

The importance of the automotive sector for the European economy cannot be understated, and it has even increased in recent years. Its production represents 3.8% of euro area GDP and it is responsible for 12.5% of European exports. These figures exceed those of 2012, when the sector accounted for 3.6% of GDP and 10.5% of exports. The sector’s relative weight in Europe is also above the global average. In 2017, the euro area accounted for 15.8% of global GDP, but its car exports, including flows between member states, accounted for 37.6% of the world’s total car exports. The breakdown by country highlights the importance of Germany, which in 2017 generated as many car exports as the three major Asian exporters combined (Japan, South Korea and China) and accounted for 47.3% of the euro area’s total exports (figures in present-day dollars). Besides the snapshot for 2017, if we look at the trend over the past few years, we see that Germany also stands out: whereas in 1990 the value of German exports was similar to those of Japan, in 2018 it was 74% higher. In Germany, car exports accounted for 7.0% of GDP and net exports (subtracting imports), 3.7%. This explains practically half of Germany’s current account surplus (which stood at 8.1% of GDP in 2018 and is the largest in the world in absolute terms).

However, the sector’s contribution to the economy goes beyond its own production volume. In fact, the automotive sector generates a significant spillover effect through which car production stimulates the rest of the sectors of the economy. Estimates2 indicate that a 1 euro increase in the production of cars generates an increase in the total production of the European economy of 2.4 euros. So, if we measure the sector’s contribution in a wider sense, taking this spillover effect into account, in Germany the weight of these «extended» exports of the automotive sector could exceed 15% of GDP. In view of the sector’s importance in Europe and its significant export component, it comes as no surprise that in the current environment of deceleration in global trade the sector has acted as a significant restriction for the growth of the euro area.

The challenges of the sector

If the economies of these European countries are so closely linked to the fortunes of the automotive sector, we must pose the question: what is the outlook for the car in Europe (Germany and partners) beyond 2019? In both the short and the long term, the sector will be continually affected by the environmental issue. The recent changes in the anti-pollution regulations, for instance, led to significant decreases in car sales in 2018, although this restriction should subside in 2019. Beyond this juncture, the sector faces major challenges in the medium and long term. The environmental issue and pollution problems in large cities will lead the sector to replace internal combustion engines with electric motors. Some countries are proposing to ban the sale
of internal combustion cars by 2040. However, the path towards electrification is likely to be longer and less certain than anticipated. The challenges of electrification in cars include increasing energy storage capacity in batteries, since it is still insufficient for the autonomy of electric vehicles to rival that of petrol vehicles; the lack of battery charging infrastructure, as well as the time it takes to recharge them; and major bottlenecks in the supply of raw materials essential for battery construction, such as cobalt. Thus, unless we see radical scientific advances (such as developments in solid-state battery or hydrogen battery technology),3 electric cars will take off relatively slowly. This view is backed by various analysts, who forecast that in 2030 electric cars will not yet have reached even 10% of global production.4 Furthermore, this delay, in conjunction with the environmental imperative, could substantially raise the price of cars and give rise to new models of transport (such as shared vehicles).

In the interregnum between combustion engines and the electric vehicle, we find the hybrid car. Currently, hybrid cars in Europe and the US account for around 2% of total sales, but analysts’ forecasts suggest that they could reach 20% within the next 10 years, a proportion already achieved in Japan. In this transition, the European car sector is clearly behind other economies, such as Japan, as illustrated by the fact that the Japanese group Toyota represents 74% of the cumulative sales of hybrids in Europe. A similar view is reflected in the stock prices of the various German automotive groups compared to those of Japan. Germany exports 1.74 dollars in cars for every dollar that Japan exports, and its three automotive groups produce 15 million cars worldwide, with significantly higher prices and margins than the 22.3 million cars produced globally by the Japanese groups.However, the market capitalisation of the four Japanese car firms exceeds that of the three German groups by 15%.5

The automotive sector in Spain

In the case of Spain, the sector has experienced strong growth over the last decade, with exports that represented 4.5% of GDP in 2018, rising from a low of 2.8% in 2009. Spanish car production is clearly geared towards exports, since around 2/3 of the sector’s production is exported. Furthermore, in Spain, the sector has exhibited greater integration with Germany and its neighbouring countries, as well as achieving a significant increase in sales to the United Kingdom and the US. According to data for 2016, Spain’s car exports represented 23.3% of the euro area total, well above the weight of Spain’s GDP in the euro area, which stands at 10.5%. This momentum in car exports led to the exports of Spanish goods maintaining their share of total global exports at a time when most advanced economies were losing ground to the onslaught from East Asia. Since mid-2016, however, Spanish car exports have stopped growing and have remained at the levels achieved. This stagnation, which is not specific to any particular geographic destination, could be due to the significant weight of diesel vehicles in Spanish production.6 In addition, in macroeconomic terms, it helps to explain the reduction in the current account surplus seen in recent quarters.

The future is not written. The history of the European automotive sector is marked by successes and the economies of the euro area have relied on them to their advantage. However, as has become all too apparent in recent quarters, when this successful track record falters, the wider economy feels the consequences. It is therefore crucial that the sector adapts to the technological changes that are coming.

1. See the Focus «Euro area growth: neither very fast nor particularly slow» in the MR01/2019.

2. Estimates based on input-output tables of the European Commission. See https://ec.europa.eu/eurostat/statistics-explained/index.php?title=Consolidated_supply,_use_and_input-output_tables&oldid=420861.

3. In the last 20 years, no viable solution to incorporate hydrogen into passenger cars has been reached.

4. Goldman Sachs (2018). «The next growth engines: traction motors and inverters». 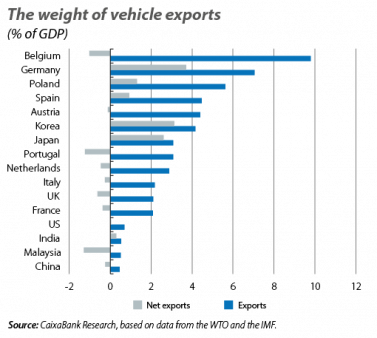 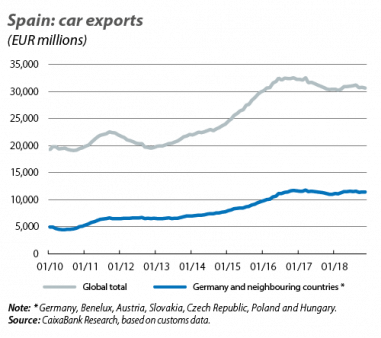 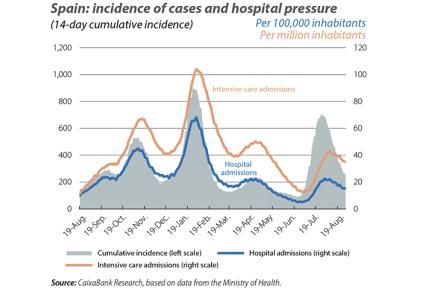 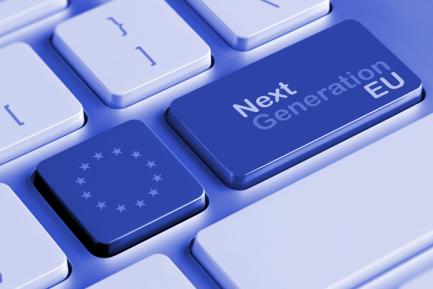