Chile: in search of lost investment

Chile's economic development is facing an important chapter in a story which, to date, has been a success in many respects. The country could not avoid the global recession of 2008 and 2009 but recovered with enviable speed: GDP grew by more than 5% year-on-year during the period 2010-2012. Moreover it did so under relatively unfavourable conditions as, at the beginning of 2011, the price of copper embarked on a clearly downward trend. It should be noted that copper is the most important item in Chile's exports, accounting for 60% of the total. The reason for such resistance being shown by growth within a relatively adverse international context is the dynamic performance by domestic demand and particularly increases of between 12% and 14% in gross fixed capital formation in each of these three years. However, quite unexpectedly this pattern of growth halted in 2013 and investment barely grew by 0.4% year-on-year. What might be the reason for this worrying figure? Will its effect be temporary or permanent?

One initial element penalising gross fixed capital formation in Chile is the reduction observed internationally in commodity investments. According to data from SNL Metals & Mining, a consultancy firm specialising in monitoring the world's mining industry, there was almost a 30% global reduction in 2013 in the budgets of large corporations in the sector aimed at mining projects for non-ferrous metals (one of these being copper). This is the industry's response to the combination of lower prices and uncertain demand in many countries. But in addition to this adverse factor of external origin there is also a domestic factor: insecurity surrounding the political take-over of the centre-right by the centre-left. The elections have raised doubts not so much about the outcome per se (Michelle Bachelet's victory had been widely predicted) but for what this represents for the direction of economic policy. In particular, the business world has expressed concern about fiscal reform. The aim of the proposed legislation in this area (currently about to be passed by the Chilean Senate) is to achieve an annual increase in revenue equivalent to 3% of GDP, whose fundamental purpose is to finance higher education. According to the bill, the main source of higher revenue will be a hike in corporate tax (from the current rate of 20% to 27% in 2017) and the elimination of fiscal credits for investment.

Given this situation, how can we expect the country's investment to perform over the coming years? We do not expect any excessive change from the first of the aforementioned downward trends regarding investment, namely the declining phase of the world investment cycle in mining. However, we do believe that the uncertainty resulting from the change in economic policy is very likely to diminish as this first year of the new legislature progresses. Chile is still the country in Latin America with the best institutional environment and the most consolidated macroeconomic stability. The experience of Bachelet's first presidency, during which time she seemed to be fully aware of the need to look after the institutional framework, lessens the risk of an excessively interventionist agenda of reforms altering this key factor for competiveness. This should mean that, in 2014 and especially in 2015, investment will once again grow at an acceptable rate, namely above 5% year-on-year. This recovery in investment, together with other encouraging factors in the short term (the depreciation of the peso which will stimulate exports and monetary relaxation in a context of moderate inflation) will help the economy, after a relatively circumspect 2014, to grow by close to 4.5% again in 2015. 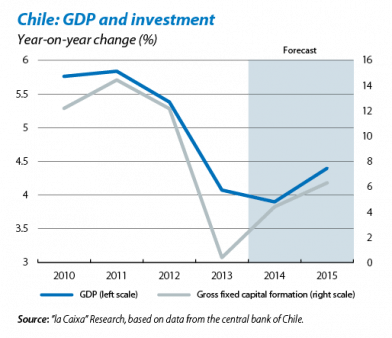