Crisis and poverty in advanced countries: Europe and America soften the blow

Public debate is full of references to the great impact the economic crisis is having in terms of poverty. However, it is not so customary to wonder whether poverty has increased along the lines of the decline in economic growth, neither is it usual to compare this relationship between countries. Unfortunately, answering these questions is complicated as international poverty indicators are in short supply and subject to evident limitations, including the fact that they do not entirely cover the years of the crisis.(1)

However, if we limit our interest to countries in the European Union (EU), Eurostat publishes a poverty indicator that does provide more recent data (up to 2011), with the added advantage that its definition of poverty covers many different aspects of the phenomenon. Specifically, the EU calculates the percentage of the population of its Member states at risk of poverty or social exclusion. This risk is defined as the percentage of the population that lives in at least one of the three following conditions: at risk of monetary poverty, in a situation of severe material deprivation or living in a household with very low work intensity.

According to Eurostat's definition, people at risk of poverty are those whose income falls below 60% of the median disposable income of their country. Severe material deprivation occurs when a person cannot afford four of a series of nine specific expenses, such as a colour television, heating, washing machine, etc. Lastly, a household with very low work intensity is one whose adult members of working age have worked less than 20% of the year; i.e. less than two and a half months in one year.

In order to complete our international examination, and although the aforementioned comparative methodology cannot be replicated, it is germane to explore the case of the United States. This country has some particular aspects regarding the measurement of poverty. First of all, and as a result of President Lyndon Johnson's «War on poverty», for the last five decades the United States has defined its poverty threshold as the income required to acquire the cheapest of four officially defined food plans, multiplied by three (the average household was considered to allocate a third of its spending to food).(2)

We therefore return to our question at the start of this box: has poverty in the United States increased in line with the intensity of the crisis? This is answered by a recent study by Danzinger, Chavez and Cumberworth (2012).(3) According to this study, the rise in the poor population, which has gone from 12.5% of the total in 2007 to 15.1% in 2011, can be explained by the impact of the recession (which, in North America, lasted from December 2007 to June 2009). However, the impact of the crisis has been less than previous recessions would indicate. Both the current level of poverty and its variation during the crisis are similar to the recessions in the 1980s and 1990s, episodes that were clearly less serious than the current crisis. The authors stress that the extension of certain social aid programmes contained in the law to boost the economy in 2009 (the American Recovery and Reinvestment Act) were determining factors to limiting the rise in poverty. According to Danzinger and his co-authors, without these transfers poverty would have reached 15.8% of the population in 2010 compared with 15.1% (around two million fewer poor).

In conclusion, the crisis has worsened poverty both in the United States and in Europe but, in both cases, there are idiosyncratic factors that have tempered this impact, avoiding a direct transfer between economic decline and rising poverty.

(1) For a detailed review of the limitations of international poverty indicators, see the box «Poor in the lands of the wealthy: United States wakens while Europe begins to dream», "la Caixa" Monthly Report, July-August 2007, and «The different faces of poverty» by Judit Montoriol-Garriga in this Monthly Report.

(2) Although other income thresholds are mentioned in the official definition, related to living under a roof and clothing, the benchmark threshold is food.

This box was prepared by Àlex Ruiz 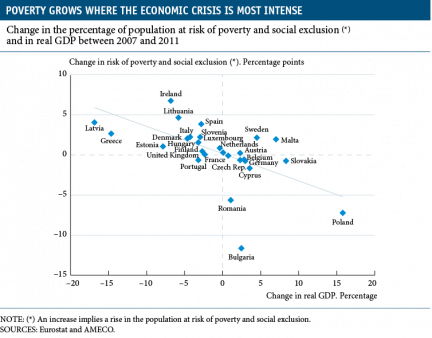 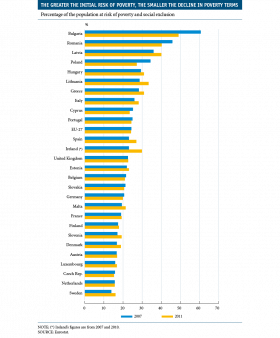 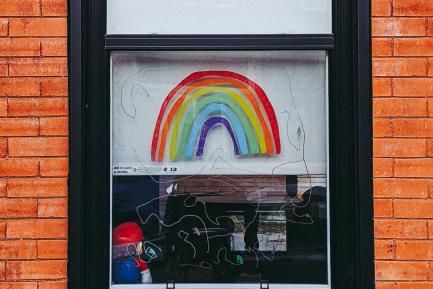