Emerging Europe: prosperity in the euro area will help to overcome difficulties with Russia

Should the forecasts be right, 2015 and 2016 will be two years of clear expansion in emerging Europe: on average during the period 2015-2016, Poland, Romania and Slovakia will grow by more than 3%, the Czech Republic will almost reach this figure and the only countries to trail behind will be Hungary (with growth forecast at 2.5%) and Bulgaria (1.4%), two economies hindered by a relatively unfavourable business environment. These are high figures and therefore beg the question: what are they based on?

Apart from a few local idiosyncrasies, the dynamism expected in emerging Europe is the result of a combination of three factors: renewed growth in the euro area, the temporary boost provided by cheaper oil and the continuation of good financing conditions. Regarding the first factor, an analysis of trade flows for emerging Europe provides detailed information on how the region functions economically. As can be seen in the graph, most trade with emerging Europe is concentrated within the core countries of the euro area while inter-regional flows, although important, have lower volumes. However, the intensity of trade flows between the region and Russia is clearly lower. Based on this overview of the trade situation we can see why, during a period which will witness two good years of growth in the euro area (with average growth of 1.7%) and an appreciable recession in Russia (–3.3% in 2015 and –0.8% in 2016), the first is going to be much more important than the second. Russia's difficulties would only truly be disruptive for emerging Europe if they affected its exports of commodities and intermediate goods as these goods categories are key inputs for the region. However, if the euro area does not fulfil expectations due to adverse circumstances, the region will find it hard to avoid a slide towards mediocre growth figures.

The importance of the second factor, namely the boost to growth provided by lower oil prices, results from the fact that all the countries in emerging Europe are net importers of oil.1 In this respect, emerging Europe is not so very different from its partners in the European Union (EU). However, another factor coming into play in Europe, namely the exchange rate, does make a difference. One factor often cited as supporting growth in the euro area is its currency's depreciation which is helping European exporters to improve their price competitiveness. In the case of emerging Europe this factor has less weight as, last year, the region's currencies remained almost unchanged against the euro, their main trading currency.

Lastly, the third development expected to support economic expansion is international bank financing. The relative weight of foreign banks and in particular EU banks is very high in the countries of emerging Europe. According to OECD figures, in 2012 the share of foreign banks (from the EU) in all assets ranged from 54% for Hungary to 96% for Slovakia (in the EU the average share of foreign banks was 17%). This high proportion has been a risk factor on other occasions because the credit capacity of central European subsidiaries largely depended on the health of their parent banks. However, the financial situation is now more benign, partly thanks to the measures being carried out by the European Central Bank and partly due to banks' improved solvency and liquidity. This circumstance will allow the banking sector to support the expansion of emerging Europe in the short and medium term.

In summary, apart from the idiosyncratic domestic factors of each country, external factors will help emerging Europe to enjoy a period of notable growth over the next few years. The single currency countries will provide both foreign demand and financing for central European economies, two elements that have traditionally had a great impact on the region.

1. Net fuel imports range from 6.2% of GDP in the case of Hungary
to 1.4% for Romania, according to Eurostat data. 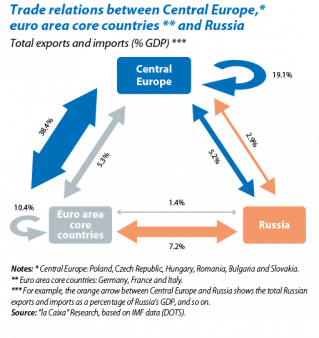 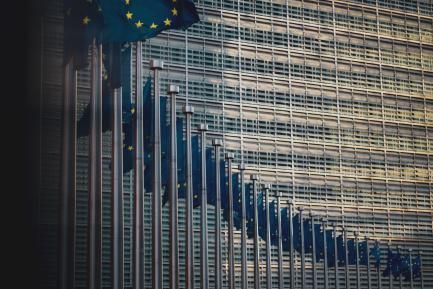 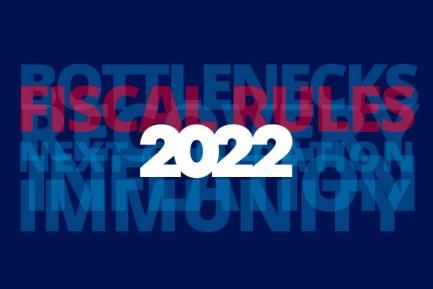