Emerging risks: a cocktail made up of the Federal Reserve, commodities and politics

The emerging economies are about to post two positive years. According to CaixaBank Research forecasts, average growth for the 20 benchmark emerging economies (see the list of countries in the chart) will be 3.0% in 2017 and 3.4% in 2018, compared with 2.6% in 2016. This faster growth in economic activity will go hand in hand with a moderate rise in inflation, from 5.0% in 2016 to 5.5% in 2018. Nevertheless, these countries will not take advantage of their expansion to decisively tackle pending macroeconomic imbalances. In particular, there is little sign of fiscal consolidation or deleveraging, neither public nor private. Even so, the overall perception is favourable. Given this context, what risks do these countries face? Is the situation of the past few months, with significant global sources of uncertainty, still threatening the so-called «fragile emerging economies»? Unfortunately, the answer is that downside risks are still considerable.

Before analysing the risk factors for these economies in more detail, we should note that the risk assessment presented here reflects the likelihood of the macroeconomic scenario for the different emerging economies being different from the scenario forecasted by CaixaBank Research for each of these economies. Specifically, both the probability of the risk occurring and its impact on the base scenario make up a qualitative index for each economy during the period 2017-2018.1 This index ranges from 0 (lowest level of risk) to 6 (highest level of risk). Although many different risk factors affect the different countries, we can identify two broad categories: global risks and idiosyncratic risks. The impact of the former is typically broad or across a large number of economies. For example, tighter international financial conditions than expected due to the US Federal Reserve’s monetary normalisation policy. Idiosyncratic risks, however, originate in and affect just one country. An example would be political uncertainty caused by domestic issues affecting a specific country.

The average risk for the whole group of emerging countries analysed is 4.0. Global factors weigh slightly more heavily in this figure than idiosyncratic factors (54% compared with 46%, respectively). But it is important to note that idiosyncratic factors appear to be more important in the five countries with the highest level of risk, although global risk factors are still significant.

We should therefore look at what these risk factors are. To tackle this question, we need to establish two criteria. The first is frequency; i.e. the number of countries that could be affected by the risk in question. The second could be called intensity; i.e. the mean level of risk obtained from averaging the extent of the risk in question in those countries where it is present. By far the two main global risks are tighter international financial conditions (which could affect 13 of the 20 emerging countries and with a high intensity of 4.6) and lower commodity prices than expected (affecting 10 countries, all commodity exporters, with an intensity of 4.3).

A similar analysis can be carried out of the idiosyncratic risks, grouping them by type. One first block could be called «political-institutional». This contains risks such as populism, lack of political predictability and institutional deterioration. This risk category affects 10 countries with a high intensity (4.5). Intensity is also high in the next group, namely «geopolitical», affecting 7 economies with an intensity of 3.8. Finally, a third block of idiosyncratic risks is related to public finances. Here we find just 5 countries, albeit with high intensity (4.4).

In short, two major conclusions can be drawn from a risk assessment of the emerging economies in question. The first is that we need to keep a close eye on idiosyncratic risks, albeit without neglecting risks of a global nature. This conclusion is particularly useful since very often attention, and debate, regarding the emerging countries focuses extensively on their vulnerability to global sources of risk, to some extent ignoring the role that might be played by idiosyncratic factors. The above data suggest that, although global factors are certainly a source of risk, domestic weak fronts are also far from negligible. The second conclusion is that political factors are a major source of idiosyncratic risk in a large number of emerging countries.

1. This Focus summarises the risk assessment of 20 emerging economies carried out in the CaixaBank Research publication «Fichas país»», number 4, June 2017. 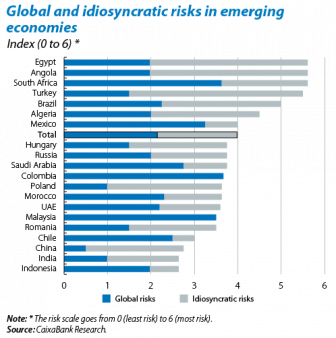