Following a truly exceptional 2017, the growth of the euro area dropped down a gear in the first half of 2018. Although this raised some suspicion, it was attributed to temporary factors (colds, strikes, meteorology, etc.). However, the pace of growth in Q3 was much lower, and this has already triggered some alarms. To what extent should we be worried? In this article, we will study this issue in detail: we will start by analysing the data for Q3 to settle the question of what failed, before exploring the outlook for the European economy over the next few quarters.

When we look at the breakdown of GDP in Q3, the elements of most concern are the modest growth in private consumption (+0.1% quarter-on-quarter) and the decline in exports (–0.1% quarter-on-quarter). However, when we delve deeper into the causes, we see that both components have been partially affected by significant temporary factors.

In particular, two temporary factors have weighed down household consumption. Firstly, the price of oil rose more than expected in Q3, which reduced households’ purchasing power (real consumption slowed down but nominal consumption remained stable, such that households failed to offset the rise in prices with greater expenditure on this occasion). According to our estimates,1 the rise in oil prices shaved 0.2 pps off growth in consumption in Q3, which in turn would have reduced quarter-on-quarter GDP growth by 0.1 pp.

Secondly, on 1 September a new EU-wide protocol on vehicle emissions came into force. The new regulation caused major disruption to economic activity: as can be seen in the second chart, in August vehicle manufacturers were able to sell the stock of vehicles that would not fulfill the new requirements, but this was more than offset by the fall in production in September – when manufacturers had to slow down their production to adjust their vehicles to the new regulatory framework. We estimate that this second factor also reduced GDP growth by 1 decimal point,2 as the lower levels of car production eroded economic growth. In addition, the reduced production of vehicles dragged down exports, which we estimate reduced growth by an additional 0.2 pps.3 As such, the temporary factors deducted 0.4 pps from growth (see the third chart), meaning that if they had not been present, growth could have reached a solid 0.6% quarter-on-quarter.

These results are reassuring, but we also want to analyse the economic outlook for the euro area over the coming months. On the one hand, the moderation in oil prices witnessed in Q3, the automotive sector’s return to normal levels of activity observed in October and the buoyancy of the labour market4 point towards a significant upswing in consumption in Q4 and set the stage for an encouraging 2019. On the other, the persistence of accommodative macrofinancial conditions will continue to bolster consumption and investment. The element that is of most concern is the weakness of the external sector (even if car exports had not fallen in Q3, the contribution of external demand would have been –0.1 pps in quarter-on-quarter terms), which has been affected by uncertainty, the slowdown of the global economy and trade tensions. We expect that the external sector will continue to go through a rough patch over the coming quarters, but thanks to internal demand, this should not prevent us from seeing reasonable economic growth rates for the euro area as a whole.

Following this qualitative vision, we end the article with a quantitative analysis that offers some figures to help us determine the magnitude of the somewhat positive developments we expect to see over the coming months. To do this, we construct a stylized model for predicting GDP growth over the coming quarters, based on the records of the Purchasing Managers’ Index (PMI) and estimates of the main economic activity indicators (retail sales and industrial production)5 in Q4.6 This predictive exercise indicates a quarter-on-quarter GDP growth of 0.4% over the coming quarters. This is a significant growth rate and similar to that indicated by our forecasts (0.5% over the coming quarters).

In short, our estimates suggest that there are enough ingredients present for the European economy to regain its buoyancy over the coming quarters. All in all, we must be very cautious in relation to the closing stretch of 2018 and the beginning of 2019, given that a new factor has emerged that is having a detrimental impact on the economy. Specifically, the disruptions to economic activity in France after the demonstrations of the yellow vests have reduced the PMI in December and could represent a new obstacle for economic growth in the euro area.

1. We compared real consumption with the oil prices recorded (68 euros a barrel at the end of Q3) against a scenario with oil prices at around 60 euros a barrel (the average for the first nine months of the year).

2. The quarter-on-quarter growth of new vehicles registered was 4.5 pps lower than expected, and 4% of household expenditure in the EU goes on cars, resulting in a decline in consumption of almost 0.2 pps.

3. The growth in car production was more than 8 pps lower than expected in Q3. Given that European car exports account for 7% of total exports, this unexpectedly low figure reduced European exports by almost 0.6 pps.

4. According to data from the ECB, the remuneration per worker grew by 2.5% year-on-year in Q3, the highest rate since 2008.

6. We used the observed retail sales and industrial production figures in October, and an estimate of the figures for November and December based on the PMI observed in Q4. 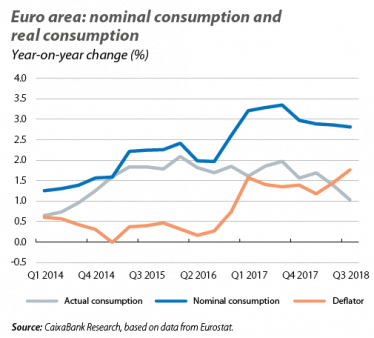 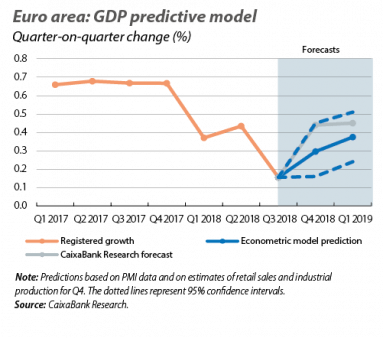