The European Union in search of lost equilibrium

Most of the EU countries have significant economic imbalances. This is the conclusion reached by the latest macroeconomic imbalance procedure (MIP) prepared by the EC. Of the 27 countries that make up the EU, 11 have mismatches that jeopardize the functioning of their economies and 2, Spain and Slovenia, have excessive imbalances that require urgent adjustment. In fact, with the new regulations the EC can impose penalties if the necessary measures are not taken. Lastly, a further 5 countries have received financial assistance with the conditionality to comply with detailed reform programmes (Greece, Ireland, Portugal, Cyprus and, outside the euro area, Romania).

The MIP is one of the new measures aimed at strengthening EU governance. The objective: to improve the coordination and surveillance of the different macroeconomic policies of Member states. The process is simple. At the start of each year, the EC identifies the imbalances within each country as indicated by an analysis of 11 economic indicators such as the level of debt, the trend in house prices and external competitiveness. Based on these, it recommends the measures to be taken in those areas identified as potentially problematic. Suggestions the governments must bear in mind when drawing up their Reform Programmes.

According to EC Vice-President, Olli Rehn, excessive debt, poor competitiveness and challenging external liabilities are the main imbalances suffered by EU countries. Regarding private debt, for example, in 2011 15 of the 27 European Union countries exceeded the threshold at which their debt is considered to pose a risk for economic growth (160% of GDP). However, there are significant differences between countries. In Germany this figure stood at 128% while in Ireland it was over 300%.

In fact, according to the MIP, the German economy has no worrying macroeconomic imbalances. However, this situation might change if it does not stimulate domestic demand. Over the last 3 years, on average its current account surplus has remained below 6%, the limit established by the EC, but in 2012 this reached 7.0%. At the other end of the scale are the periphery countries which, after many years of large deficits, seem to be finally managing to adjust.

Of these countries with imbalances, the EC singles out Slovenia and Spain. In the first case, the main priority is to strengthen its public banking system. The high NPL ratio, which reached 15% in 2012, is keeping pressure on the sector's capital requirements, which different estimates set at between 3% and 5% of GDP. The EC's recommendations focus on promoting the creation of a body to amass the banks' impaired assets, and on improving bank supervision.

With regard to the Spanish economy, the EC believes it has significant imbalances in spite of the progress made over the last few years. The main concerns are high debt levels as well as the impact of the recession on the labour market and public finances. Consequently, in Spain's case reforms must focus on improving competitiveness and boosting growth, as well as ensuring public finances are sustainable in the medium term; suggestions which the Spanish government has taken into account in drawing up its National Reform Programme. 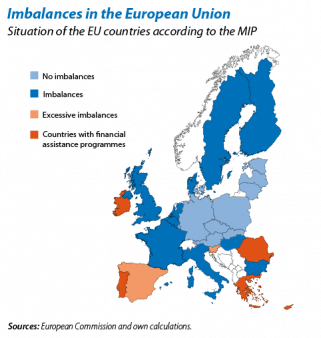 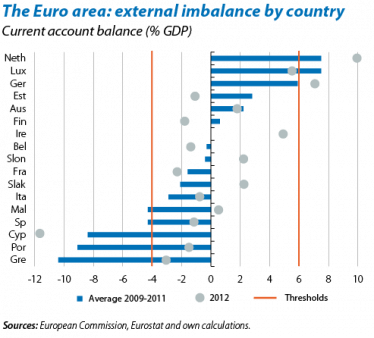