The figures continue to indicate recovery

The IMF has slightly increased its global growth forecast for 2014, thanks to the improvement in the developed economies. The world economy will grow by 3.7% in 2014, 0.1 percentage points above October's forecast. The acceleration in the forecast for the USA is supported by the smaller fiscal adjustment planned in 2014 and the upswing in activity that already happened in the second half of 2013. The forecast for Japan has also been increased, helped by an expansionary fiscal policy. Meanwhile, the euro area will enter positive terrain after two years of recession. However, the forecast for the emerging countries as a whole has not been altered, although this does conceal significant differences between countries. In fact, as has been seen once again towards the end of January, the problems of some emerging economies represent one of the main risks in the scenario of global economic improvement.

The 2.7% advance year-on-year in 2013 Q4 confirms the US recovery and places growth at 1.9% for the year as a whole. Although in quarter-on-quarter terms there has been some slowdown (3.2% annualised quarter-on-quarter in the Q4 compared with 4.1% in Q3), the underlying trend is one of recovery. Of note is the significant improvement in private consumption and the foreign sector. However, productive investment has not been as vigorous as expected and has once again disappointed, particularly if we take into account the good performance by corporate earnings in 2013 (+6.5%). Residential investment has suffered an expected dip that should not continue for long. Also according to expectations, public consumption detracted from economic growth while inventories still have an excessive contribution that should reverse in 2014.

This GDP figure endorses the Fed's decision to continue with its tapering (cutting 10 billion dollars from its bond purchases) and is in line with the message conveyed a few weeks ago in its regular field study (the Beige Book), stating that economic expansion was continuing to spread throughout all the states in the country. In line with this message, our central scenario predicts that growth will speed up in 2014 (to 3.0%), supported by domestic demand. In particular, domestic consumption will gain ground thanks to the reduction in adjustments and fiscal uncertainty and to the improvement in the labour and real estate markets. We also expect a significant rise in investment, helped by the aforementioned good performance by corporate earnings.

The most recent business indicators confirm the positive tone of the US economy, albeit with some slight differences. The consumer sentiment index rose in January to 80.7 points, encouraged by the improved labour market and good economic outlook for 2014. Business people are also still moderately optimistic. The ISM business sentiment index for manufacturing remains clearly above the 50 point threshold (the boundary between expansion and recession), standing at 57.0 points in December. The ISM index for services showed a similar pattern, now standing at 53.0 points. At the same time, retail sales grew by 0.2% month-on-month (excluding petrol and automobiles, which are volatile items). Meanwhile, the real estate market is still performing well. The Case-Shiller index for house prices, covering 20 metropolitan areas, once again surprised with its November figures, showing a rise of 13.7% year-on-year, the biggest year-on-year increase since 2006. Sales of second-hand homes also rose in December, up by 1% compared with the previous month. This growth places total transactions at 5.09 million for 2013, 9% higher than the figure reached in 2012 and the best figure since 2006.

The slight differences appear in the labour market, which posted an abnormally low rate of job creation in December. Official statistics estimate 74,000 new jobs created, clearly below the figure expected by analysts and the monthly average of 182,000 recorded during the period 2012-2013. The snow storms and wave of cold weather affecting half the country undoubtedly lies behind part of this weakness. At the same time, the unemployment rate has fallen from 7.0% to 6.7%. This apparently good piece of news is overshadowed by the fact that the drop can mostly be explained by the increase in the number of discouraged workers who have given up looking for work. This is reflected in the participation rate (the ratio between the workforce and the population aged over 16), which stands at 62.8%, 0.2 percentage points below November's figure.

Growth moderates in Japan. The Japanese economy had grown above its potential in the first half of 2013 thanks to an unprecedented expansionary monetary policy (the first pillar of Abenomics). However, in the final part of the year, exports and investment (the main drivers behind recent growth) have gradually lost steam. As a result, the trade balance for the whole of 2013 has returned to a deficit (2.4% of GDP), in spite of the strong depreciation of the yen (18% against the dollar) which should have visibly boosted exports as it made them more attractive in price terms. However, our forecast is for Japan not to slow down but to remain at a reasonably good rate (in the area of 1.5%) in 2014. In this respect, November's machinery orders point to a recovery in investment.

Deflation is gradually diminishing. Monetary expansion seems to be working in the area of prices. December's CPI rose by 1.6% year-on-year and the core CPI (excluding energy and foods) increased by 0.7%, the highest since August 1998. Given this situation wages, tending towards zero growth until October, picked up in November, which might boost domestic consumption from now on.

China's GDP increased by a significant 7.7% year-on-year in Q4, ending 2013 with growth also of 7.7%. Although in quarter-on-quarter terms this increase was slightly lower than the figure recorded in Q3 (1.8% compared with 2.2%), the final figure is in line with the government's annual target (7.5%) and leaves behind the bad news coming from the Asian giant last summer. All this in a context of strongly contained prices: inflation is still fluctuating around 2.5%.

The latest business indicators still show an investment-export bias. Pending details for the GDP figure by demand component, this is the conclusion that results from the partial indicators. Changing the pattern of growth towards a model supported by domestic consumption requires numerous measures and time to gradually transform the economic situation of such a complex country. Although below consensus expectations, December's exports brought annual growth to 7.9%, practically the same growth rate as in 2012, while urban fixed-asset investment increased by 19.6% in 2013, slightly below the figure of 20.7% posted in 2012.

Significant risks are still present in Asian's foremost economy: public debt and the financial sector. Regarding the fiscal problem, the government has increased transparency and control over local government finances. Secondly, it has also taken measures to control credit, both in the area of banks and also in the growing shadow system. In fact, credit to the private sector has shot up from 120% of GDP in 2007 to 178% at the beginning of 2013. Greater credit control should certainly help to contain house prices (another significant risk) and local government spending, extensively financed through bank loans to special investment vehicles.

Further waves of depreciation are spoiling the outlook in several emerging countries. The Argentine peso has seen its largest depreciation since 2002, more than 20.5% against the dollar between 21 January and its weakest moment, after the central bank's decision to limit intervention in its defence. A 30% drop in international reserves since May lies behind this change in policy. This depreciation is ultimately due to entrenched economic imbalances and particularly inflation (around 10% since 2010, according to official figures which very likely underestimate it). Turkey, also affected by inflationary pressures and considerable external imbalances, has been another of the economies suffering severe convulsions in their currency, with depreciation in excess of 6.7% between 21 January and its weakest moment. Given this situation, the country's central bank has reacted quickly and decisively with a widespread interest rate hike. India, Brazil and South Africa have once again surprised with interest rate hikes (up to 8.00% in India, 10.50% in Brazil and 5.5% in South Africa), in order to defend their respective currencies and slow up inflation. 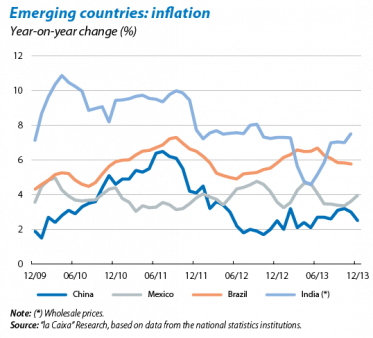