The German Mittelstand, a benchmark for Spanish SMEs

The hallmark of German SMEs (or Mittelstand) is a long-term view of business. They therefore prioritise both product quality and after sales service. This strategy, recognised as a benchmark for decades now, has stood out even further in recent years as it has proved to be crucial to successfully handling the effects of the crisis: between 2008 and 2013, the gross value added (GVA) of German SMEs increased by 18% and the number of employees grew by 19%. These figures contrast with those of Spanish SMEs, where both the GVA and the number of workers fell by almost 25% over the same period.1 Although many factors lie behind this gap between German and Spanish SMEs, a simple comparison of both models provides useful pointers that could help make Spain's businesses more robust.

One of the main features of German SMEs is their larger share of medium-sized firms (between 50 and 500 employees) compared with small enterprises (between 1 and 20 workers). Company size is important, at least for three reasons. Firstly because it is closely related to the longevity of the company, a desirable feature as the older a company gets, the more it tends to consolidate its production capacity and improve its market penetration. For example, in January 2014, only 14% of Spanish companies employing 20 or less workers had been in business for more than 20 years while this percentage climbs to 43% in companies with more than 20 employees (see the first graph).

The second factor to take into account is that larger companies also tend to export more. It therefore comes as no surprise that, on the whole, a larger percentage of German SMEs sell abroad, specifically 11% compared with 4% in Spain. However, it is also notable that Spanish medium-sized companies have a higher export rate than German companies (see the second graph). Another encouraging figure is the significant increase in exports by Spanish SMEs as a proportion of their total sales, going from 11.9% in 2007 to 18.2% in 2011.2 Although more recent data are not available, it is very likely that this trend has intensified in the last few years, given the good performance by exports.

Lastly, larger company size also helps German SMEs to diversify their sources of financing to a greater degree, something that is especially useful in prolonged periods of financial stress, such as the last few years. Efforts are being made in this area in Spain, for instance by creating the MARF (alternative fixed income market) and the MAB (alternative stock market).

The resilience of German SMEs as a whole is also due to their wide range of sectors whereas, in Spain, the share
of SMEs in the construction industry was obviously considerable, up until the crisis. However, after the adjustment carried out by this sector over the last few years (close to 100,000 construction SMEs closed down between 2008 and 2012), the diversification of German and Spanish SMEs is now similar. The relative weight of retail is slightly higher in Spain, a relatively reasonable feature given the country's greater importance as a tourist destination, while the sector of professional, scientific and technical service firms stands out in Germany.

The production processes of German SMEs also tend to have a high technological content, helping to increase their value added and employment quality. For example, in 2012 the percentage of people employed in medium and high technology-intensive manufacturing SMEs was 5.4% in Germany, higher than Spain's figure of 2.9%. With regard to the services sector, in German SMEs 16.4% of the workers belong to knowledge-intensive sectors, compared with 13.5% in Spain.3

In short, a more internationalised, innovative and diversified SME sector is key to the success of the Mittelstand. On the whole, Spanish SMEs are still far from achieving the records set by their German peers but the progress they have made over the last few years gives us cause to be optimistic.

2. Data from the SEPI Foundation for industry on enterprises with fewer than 200 employees. 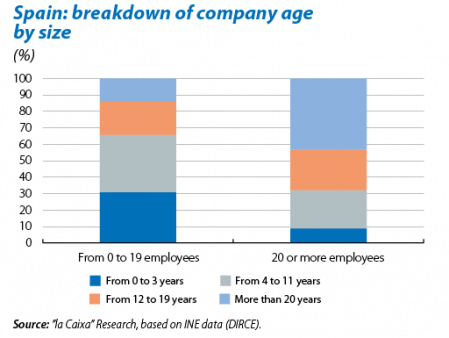 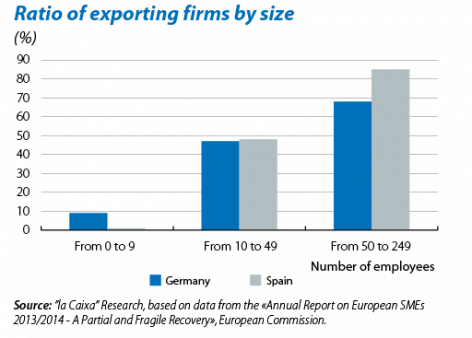