Growth is speeding up in the emerging countries, but not inflation

The emerging countries have driven global growth over the past few years. While the advanced economies entered a recession in 2009 and have since seen a relatively modest recovery, the emerging economies have enjoyed a notable rate of GDP growth, although this has now fallen from 7.4% in 2010 to 4.1% in 2016. As emerging growth has gradually slowed down, emerging inflation has also tended to fall moderately, going from 5.6% in 2010 to 4.4% last year. Now that the rate of GDP growth in the emerging countries looks like accelerating over the coming years, will inflation follow suit?

Not according to the IMF forecasts. Although growth is expected to speed up considerably over the coming years, possibly reaching a rate of 5.0% by 2019, the institution predicts that emerging inflation will continue to fall. A brief review of both the cyclical and underlying aspects influencing the trend in inflation can throw some light on the conditioning factors for future inflation in the emerging countries.

One of the most widely used tools by economists to analyse long-term inflation throughout the economic cycle is the Phillips curve. This relates an economy’s inflation to its output gap (the difference between actual and potential GDP). We might suppose that inflation tends to be stable when actual GDP is the same as potential, while deviations in the actual GDP rate above the potential tend to push up inflation (and push it down in the opposite case). However, since the beginning of the new millennium this relationship appears to have weakened in the emerging economies (see the second chart). Although the output gap for the emerging countries as a whole has gradually narrowed over the past few years, inflation has failed to pick up.

Globalisation is one of the reasons for inflation becoming less sensitive to the economic cycle. The rise in international trade is providing access to an increasingly large market of goods. This means that prices are tending to converge globally, raising the importance of the global output gap in detriment to the domestic in terms of price trends.1

Another fundamental factor behind inflation’s reduced cyclical sensitivity in the emerging countries and also its downward slide over the past few decades is the greater independence of emerging central banks and their inflation targeting. The improved credibility of emerging central banks has also helped to lower and stabilise the inflation expectations of agents. This also explains why inflation now tends to fluctuate less throughout the economic cycle, as there are fewer second-round effects.2

Finally, to understand the moderate inflation prospects for the emerging countries we must also look at two underlying global factors that affect both the emerging and the advanced economies. First, current forecasts point to commodity prices, and especially oil, following a moderate upward trend over the coming years. Second, the development of new technologies, known as the Fourth Industrial Revolution, could help to improve productivity which would also decrease inflationary pressures.

1. See the article «Growth without inflation: what does the Phillips curve tell us?» in the Dossier of MR02/2015. 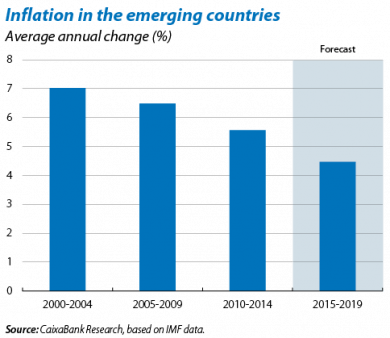 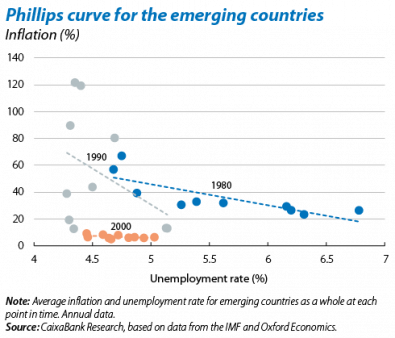