Growth without inflation: what does the Phillips curve tell us?

The economic prospects in this first part of 2015 are not entirely satisfactory in most advanced economies: although GDP growth is expected to be higher than last year, inflation has yet to show any signs of returning to an upward trend. Volatile factors such as the slump in oil prices are largely the cause of the recent fall in inflation but, even before the shock of oil, growth in prices did not seem to accompany the economic recovery. What are the reasons for this economic growth without inflation?

The theoretical framework normally used to analyse the dynamics in inflation over the short term is based on the Phillips curve, which relates an economy‘s inflation to its output gap (the gap between potential and actual production). According to this relationship, the rate of inflation will be stable when actual GDP is equal to potential GDP, while deviations in actual production from the potential figure tend to generate inflationary or deflationary pressure (production above or below its potential, respectively). The original version of this curve, proposed by the British economist William H. Phillips in 1958, relates growth in wages with the unemployment rate: the greater the under-utilisation of labour market resources (when the actual unemployment rate is higher than the structural unemployment rate), the fewer wage rises agreed between workers and companies.

According to the Phillips curve, therefore, the low inflation seen during this current phase of the recovery would be explained by an output gap that is still very large in most advanced economies. In other words, the intensity of the recession would have produced a much larger output gap than in other recessions. For example, in the case of the Spanish economy, although it has seen six consecutive quarters of GDP growth, the degree of under-utilisation of its production resources is still very high compared with the pre-crisis level, as reflected by the high unemployment rate, which would prevent pressure on prices and wages. Unfortunately, using the Phillips curve to predict the trend in prices depends crucially on the estimated potential output, which cannot be observed directly and whose measurement is subject to significant limitations.1 Moreover, this estimate becomes even more uncertain after a recession, as it is difficult to distinguish between the effect of cyclical factors, such as under-utilised production resources, and structural factors such as a permanent reduction in an economy‘s output capacity.

Besides the output gap, other additional factors should be mentioned that can also keep inflation down during a recovery. One such factor is the difficulty in reducing nominal wages. Because of nominal rigidities, there was no extensive adjustment in wages during the recession and, consequently, any increases in the first few quarters of the recovery have been limited, as a means of compensating the lack of any previous reduction. An analysis by Daly and Hobijn (2015)2 provides empirical evidence supporting this hypothesis for the US economy. Specifically, the authors show that growth in wages during the recovery across industries depends on the rigidity of wages during the recession. Those sectors where wages shrank the least in the recession in relation to the rise in unemployment are the ones in which wage growth has been most contained during the recovery. This would be the case, for example, of construction. However, those sectors where wages are more flexible and adjusted quickly to the drop in production are now seeing larger wage increases, as in the case of finance, insurance and real estate.

Nonetheless, it is important to note that inflation‘s lack of sensitivity to the economic cycle is not a new phenomenon. In fact, in most advanced economies inflation has remained notably stable since the 1980s, flattening out the Phillips curve (see the graph). This means that inflation responds less to changes in the output gap; i.e. it seems that price formation is less sensitive to the under-utilisation of inputs in the labour and product market. Economists attribute this flattening out to two fundamental transformations that have taken place over the last two decades: on the one hand, the anchoring of inflation expectations and, on the other, the impact of globalisation on prices.

Globalisation is the second factor that would explain why inflation is now less dependent on a country‘s domestic cyclical situation. The reduction in trade barriers and transport costs has led to the goods produced in one country being easier to replace by goods produced in another, so that the domestic price for these goods cannot differ too much from the price of similar goods produced abroad. Consequently, their price does not depend solely on the local output gap but also on the degree of resource utilisation at a global level. This effect can be analysed using a Phillips curve that includes the price index for imports as an additional explanatory variable. Estimates by the IMF4 do not show any clear trend in the price of imports regarding domestic prices although, for some countries, there does seem to be an increase over time of the importance of imported inflation. Measurements of the global output gap can also be incorporated into the Phillips curve. Estimates by the BIS5 show that the role played by the global output gap is increasingly important in explaining the dynamics of inflation.

In short, the low inflation in the recovery is a phenomenon which may seem surprising at first, especially given the huge injections of liquidity by central banks. However, it is less surprising when we analyse both the specific features of this crisis and the underlying structural factors that affect price dynamics at a global level. Consequently, in the short term we can expect inflation to remain low, also due to the shock from oil prices. In the medium term, however, as the economic recovery gains traction and output gaps close, inflation will return to levels much closer to the central banks‘ targets.

1. See the Dossier: «Potential GDP, a crucial but unclear concept» in the Monthly Report of May 2013.

3. Coibion O. and Gorodnichenko, Y. 2014. «Is the Phillips Curve alive and well after all? Inflation expectations and the missing disinflation.» American Economic Journal: Macroeconomics forthcoming.

4. International Monetary Fund (2013), «The Dog That Didn‘t Bark: Has Inflation Been Muzzled or Was It Just Sleeping?», Chapter 3 of the World Economic Outlook, April. 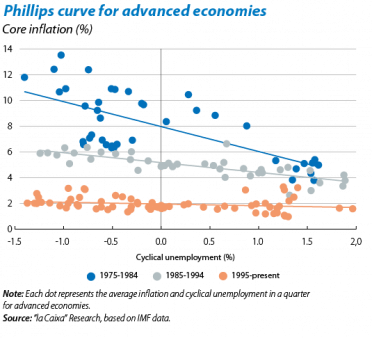