Should the ECB react to the low inflation?

In the last few years the euro area’s inflation rate has remained below the 2% target set by the ECB. However, today’s low rates are occurring within an environment of falling oil prices and a slow economic recovery. Given these circumstances, is inflation’s current behaviour so abnormal?

The first step in answering this question is to estimate the level of inflation that would have occurred had the price of crude oil not fallen. To this end we have constructed a general price index that excludes the components affected directly or indirectly by oil.1As can be seen in the first graph, which shows the trend in the actual and estimated rate for headline inflation, if there had been no fluctuations in the price of oil, since 2015 we would have witnessed year-on-year rates of around 1.3% on average.

Eliminating the effects of oil on inflation, the rate would therefore be clearly higher. Although it would still be below the ECB’s target of 2%, we should remember that the activity of the euro area economies is still recovering so we should expect inflation to be weaker than in a more expansionary phase of the economic cycle. In fact, and as shown by the last two graphs, if we compare current inflation without the effects of oil and the inflation we might expect given the historical relationship between inflation and the cyclical position of the economy, we can see that today’s rates are in line with the historical trend.

Consequently, having taken into account the behaviour of oil prices since 2014 and the cyclical position of the economy, both in the euro area and in Spain, we are witnessing reasonable rates of inflation.2 We can therefore expect that, as the economic recovery advances and the base effect of the slump in oil prices disappears, headline inflation will return to values close to the ECB’s target.

In view of this scenario, the fact that part of this low inflation is due to the slow recovery of the economy justifies an expansionary monetary policy that helps activity to achieve its potential. Nevertheless, given that the current situation is in line with the historical relationship between activity and inflation, the current low level of inflation is not such a strong argument for implementing additional measures of monetary stimulus.

1. Based on 94 components, we have excluded those whose year-on-year inflation is significantly correlated with the current or past variation in the oil price (with a maximum of three months’ difference).

2. In Spain, estimated inflation is slightly below the historical confidence interval although close to it. This is compatible with a structural change in the economy which allows it to grow with less inflationary pressure. 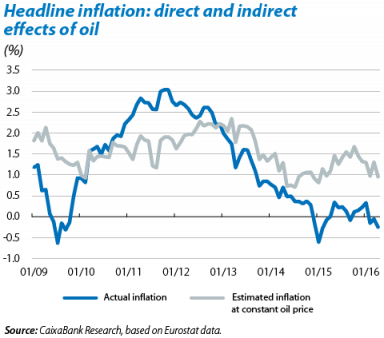