Has Russia left the zone of emerging risk?

When, in May 2013, the Federal Reserve started to specify how it would normalise its monetary policy, investors began to be concerned about the worrying situation in some emerging economies which were soon labelled as «fragile». One of the members of this group was Russia. Russia had enjoyed a period of strong growth between 2005 and 2012 (4.1% annually on average), albeit at the price of increasing inflationary tensions (annual inflation was 9.7% in the same period). To complicate matters even further, activity ran out of steam as from 2013 but prices continued to rise at a fast rate.1 As a result of this already weak situation, the country entered a serious recession in 2015 caused by two factors: falling oil and gas prices and the application of economic sanctions by the European Union and the United States due to its conflict with Ukraine. So what are the Russia's immediate prospects now? Can it leave the zone of emerging risk?

In order to answer these questions we need to look at three possible sources of vulnerability: the one attributable to the external environment, the one resulting from the domestic environment and the one caused by the geopolitical situation. Regarding the first of these three factors, of concern is the potential impact on Russia of the latest effects of US monetary normalisation in the form of tougher international financial conditions and the dollar possibly continuing to appreciate. This is an area in which several emerging countries are far from enjoying a solid position. Russia, however, does not conform to the typical pattern of the «fragile» emerging countries. Compared with their customary external imbalances Russia has a healthy current account surplus (5.0% in 2015) and, while other emerging economies are attempting to tackle this situation with meagre reserves, Russia has enough international reserves to comfortably cover its short-term external debt. Nonetheless it is worrying that, within a context of rising debt overall (99.4% of GDP at the end of 2015), and especially corporate debt, the proportion of the latter in foreign currencies has risen to above-average figures for the emerging economies.

But although the country's external vulnerabilities may not seem excessive, its domestic situation is quite a different matter. In 2015 inflation stood at a high 15.5%. This rise was due to the notable depreciation of the rouble, pushing up the price of imported goods, and also the effect of the EU food embargo which forced Russia to turn to other international food suppliers at higher prices. Although the effect of both these factors will diminish in 2016 and 2017, helping to redress inflation, the levels predicted are still high. The situation of the country's public accounts has also deteriorated rapidly, due largely to the decline in tax revenue caused by falling energy prices.

Russia's weak domestic situation has also been aggravated by the consequences of its involvement in different sources of territorial tension (firstly Ukraine-Crimea and then Syria). As a result, the EU and Russia have become entangled in a process of mutual sanctions, in addition to the sanctions applied by Russia on Turkey. From a Russian perspective this situation has made it difficult for its banks to operate internationally and has forced to country to accept more expensive external supplies. Unless there is a substantial turnaround in both conflicts, the most likely scenario is for sanctions to continue in 2016.

Does Russia's economic policy have any room to manoeuvre in order to tackle such vulnerabilities? Very little. Its monetary policy is «trapped» between opposing objectives: if the country opts to prioritise the recovery of its damaged anti-inflationary credibility by means of restrictive monetary policy, the country might take much longer to exit its recession. Fiscal policy also faces demands that are difficult to reconcile as there is a need to combine some support for the economy (concentrating on bank practice) with maintaining military spending and rebalancing the country's accounts.

In summary, how Russia's economy will fare depends largely on the two factors that are affecting it negatively (commodities and sanctions) diminishing. Given the scenarios predicted for commodity prices, which are expected to gradually recover the ground lost, the first looks like it may actually come about but the second will be more difficult as the country's international conflicts are far from being resolved. If we also factor in Russia's limited room to use economic policy, for the time being it seems premature to exclude the country from the list of emerging countries at risk. 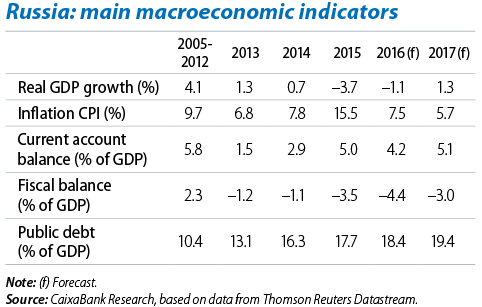