India and China: so close yet so far

Given the good economic growth figures for India and the Chinese economic slowdown, it is worth wondering about the capacity of the former to replace the impetus lost by the latter. In fact India, with a population close to 1,300 million, is the only emerging economy that could possibly follow in the footsteps of the Asian giant. However, in spite of them sharing notable features such as powerful demographics and a reduction in poverty, affecting hundreds of millions of people in both countries, India's growth is still far from the two-digit figures we had come to expect from China until very recently.

Throughout the last 35 years both countries have gradually moved apart in economic terms. While China grew at an average rate of 10% for three decades, India advanced at a rate of just over 6% and, although these figures seem to be reversing at present (China grew by 6.9% in 2015 Q3 compared with India's 7.4%), India still has a long way to go. At the end of the 1970s both economies were similar in size: India's share in the global economy was close to 3.0% and even exceeded China's share of 2.4%1 but just over three decades later China accounts for 17.2% of the world economy in economic terms while India's share is less than half its neighbour's (7.1%). A dichotomy that can also be seen in other economic variables such as GDP per capita which, in India, has scarcely increased fourfold (from 1,000 dollars in 1980 to 3,780 currently) while in China it is now 14 times bigger (from close to 750 dollars to 10,538).2

In order to understand what lies behind this disparity between these two giants, we will analyse the trends in the different factors affecting growth in any economy (in other words physical and human capital, labour and technology), as well as the policies supporting the development of these factors.3 In this respect there are two factors that particularly stand out as responsible for China's strong growth compared with India's more moderate rate: namely physical capital and technology.4 The improvement in the knowledge, ability or capacity of workers (human capital) has not been a determining factor as both countries have seen similar significant progress. Moreover, India's more favourable demographics (given China's firm control of its birth rate) has not been able to offset the improved role of physical capital and technology in China.

During the 1980s and 90s, China's investment as a percentage of GDP stood at 37% compared with India's 22% and although this last figure has gradually increased up to its present rate of around 30%, in China the percentage had already passed 45% by 2014. For the period 1990-2014, the contribution of physical capital to India's average annual economic growth was 2.6 pps, far below China's figure of 4.7 pps.5 The efforts made by the Asian giant to improve its infrastructures over several years have helped the development of omnipresent Chinese manufacturing firms while the Indian model has not supported labour-intensive manufacturing, which would have provided the country with higher growth rates. It is true that it has developed some knowledge and capital-intensive sectors (such as pharmaceuticals and information technologies) but this has not resulted in any significant growth in the country's overall manufacturing or even services. In fact, almost half India's population still works in low-productivity agriculture (compared with one third in China) and only 20% in manufacturing (30% in China).

Technological improvements have been a second key factor in the widening gap between these two Asian economies. The Conference Board estimates that total factor productivity (a measure of the contribution made by improved technology to growth) would have contributed 1.6 pps to the growth in India's average annual GDP, once again significantly below the 2.5 pps of China. Of note here are the policies that have helped China to open up its markets, leading to the country's greater technological advances such as the creation of special economic zones early in the 1980s, with special tax conditions and laws designed to attract foreign firms.6 On the other hand, although India's economy has gradually become more open, it has been (and still is) substantially more closed than China, limited by a large number of measures that restrict both trade flows and foreign investment. By way of example, whereas India and China attracted 0.1% and 1.7% of flows of foreign direct investment (FDI) at a global level respectively at the beginning of the 1980s, by the end of the 1990s China already captured 6.6% of global flows compared with India's share of less than 1%. A gap that continued to widen over the next decade: in the period 2012-2014 China attracted 9.1% of flows of global FDI, placing it second in the world ranking and only behind the United States, while India could only attract 2.1% of the total flows, placing it 13th in the global ranking. Along the same lines, according to the annual FDI index produced by the consulting firm AT Kearney which measures how attractive a country is for international investment, India lost four positions in 2015, falling to 11th and leaving the top ten for the first time since 2002, while China remained in second position for the third year running.

India's restrictions to flows of FDI have been extreme: with upper limits on investment in numerous sectors such as insurance, banking, retail and telecommunications and with the need for government approval for many investments in these sectors. Nonetheless restrictions to this kind of investment have recently been extensively reduced (both in terms of upper limits and approval procedures). Specifically, since the Prime Minister, Narendra Modi, implemented the Made in India campaign in September 2014, which aims to attract foreign investment and technology to develop Indian manufacturing firms, inflows of FDI appear to have increased substantially.7 Among the most recent measures encouraged by this new initiative is the relaxation, last November, of restrictions on investment in 15 sectors, including banking, insurance, retail and also defence and agriculture, among others.

Lastly, the contrast between the two countries is also evident in terms of international trade. Whereas exports of goods from China and India represented just 1% and 0.5% respectively of the world's exports in 1980, by 2014 China was exporting close to 13% of all global exports compared with 1.7% by India. By 2009 China had already become the world leader in exports, taking over from Germany, while India has been and continues to be a much more closed economy (19th in the world export ranking).

In summary, the gap separating India from China is considerable and has been widening for more than three decades, so it is not logical to assume that India can become the world's new China overnight. However, the country has huge potential for growth, especially if we take into account the reforms it is starting to implement: whether India prospers as much as its neighbour will depend on the success of those reforms.

1. Measured in share of GDP in purchasing power parity.

2. Measured in constant 2005 dollars according to data from the Penn World Tables (see 8.1).

3. Most of the results are based on the Growth Accounting exercise produced by the Conference Board (Total Economy Database) for 1990-2014, and on the exercise carried out by Bosworth, B., and Collins, S. M. (2007). «Accounting for growth: comparing China and India» (No. w12943). National Bureau of Economic Research.

4. In addition to purely technological advances, the term «technology» also refers to the way in which input factors (capital and labour) are assigned in an economy. From the point of view of economic growth we are talking about total factor productivity or TFP.

5. This is the annual average for the period 1990-2014 of the contribution of non-ICT capital as the Conference Board distinguishes between ICT and non-ICT capital.

6. For a theoretical analysis of the relationship between openness and innovation and economic growth see Grossman, G. M. and Helpman, J. (1993). «Innovation and growth in the global economy», MIT Press.

7. According to the Financial Times (29 September 2015) «India grabs investment league pole position», India might have reached the top of the FDI ranking in 2015. 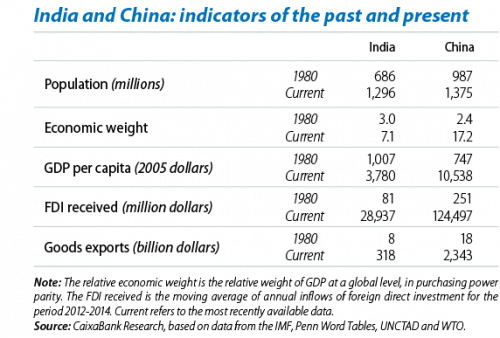