India: the future is in its hands

India is going through a period of changes in the leadership of its main economic institutions. Just a few months ago, Raghuram Rajan, renowned professor at Chicago University and former Chief Economist of the IMF, was appointed governor of its central bank. Next May, Manmohan Singh will retire as Prime Minister after ten years in office. In his time, Singh aroused a lot of hope, endorsed by his great achievement as Finance Minister: the liberalising reforms of 1993 that represented a watershed in the country's development. But Singh's achievements over the last decade have been rather disappointing. Comparing the progress of India with that of its neighbour, China, provides a good reference, one that may be rudimentary and tough but undoubtedly illustrative.

There are two big differences in the development profiles of both countries. Firstly, related to supply: China has encouraged a model based on industry while India has focused on services. At present, there are marked differences in relative weight between these two sectors. Secondly, concerning demand: China has focused heavily on capital formation, which totals 50% of GDP, while in India this has only reached one third. China's greater investment has helped it to offset its demographic slowdown (since 1993 China's population has grown by 14% compared with 36% for India).

However, all this must not be interpreted negatively in terms of India's economic future. Quite the opposite, in fact: there is huge room for improvement and this can certainly be achieved if the authorities embark on right course. In fact, India's good position in the services sector (with a commendable level of worker productivity in spite of not having invested as much as other countries) gives it a powerful edge to catch up with China.

In order to narrow this gap, India has to do its homework (overcome corruption, excessive regulation of the
public sector, deficit in infrastructures and low literacy of the population compared with China), in addition
to correcting its current macroeconomic imbalances. The anti-inflationary drive shown by the new governor (as can be clearly seen during the tensions of the last few weeks regarding emerging countries as a whole) and the reformist bias of Narendra Modi, the expected winner of the next elections, are encouraging. 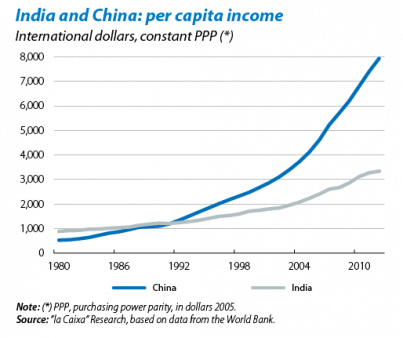 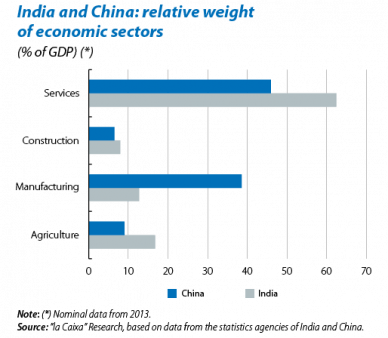