India, the star emerging economy: a glow from the past or the light of the future?

It is well known that the light we see from the stars whenever we look up at night sky left the respective suns millions of years ago. It is therefore impossible to know whether we are seeing the reflection of a sun that died out before humanity even began or a star in full ascendency. India is a glowing economy, almost certainly the current star of the emerging galaxy. But given that 2016 and 2017 are expected to be difficult for the emerging economies due to the tightening up of international financing conditions, will the country's prospects continue to sparkle in a more complicated and demanding context?

First of all let us look at the brilliance of the past. In 2015 India grew by 7.4% year-on-year, much more than any other important emerging economy including the now relatively hesitant China which only advanced by 6.9%. This sorpasso in growth terms has been repeated throughout 2015.1 The situation becomes even clearer when we compare the positive progress made by India's gross domestic product (GDP) with the recession in other emerging economies such as Russia and Brazil.

And there are more sources of light. Since May 2013, when the Fed announced it was preparing to normalise monetary policy, international investors have paid particularly close attention to the macroeconomic fundamentals of the emerging countries. Whereas financial markets had hardly separated the wheat from the chaff before this moment, since then they have become much more selective. In May 2013 India was one of the hardest hit economies and the rupee depreciated 22% against the dollar, significantly more than the currencies of other emerging countries with shakier economic foundations such as Brazil, South Africa and Turkey. Such market doubts have occurred more than once, the last time due to the upswing in financial volatility last summer. However, since then India has not come under any appreciable pressure from financial investors and now tends not to be included in the «pool» of countries that might face problems due to the tougher international financing conditions that will presumably come about in 2016-2017.

So what lies behind India's brilliant light? How can it sustain growth whilst also reducing the risk profile perceived by investors? The country's good performance is the result of two factors. Firstly, the beneficial effect of the shock of falling commodity prices in an economy which is a strong commodity importer (especially of oil and its derivatives, of which India is the world's fourth largest consumer and whose net imports account for almost 6% of Indian GDP, approximately).2

A second factor has been economic policy and, in particular, monetary policy, focusing on containing what was probably the most worrying macroeconomic imbalance, namely inflation. Whereas, in 2012-2013, this threatened to far exceed 10% year-on-year (in 2013 Q4 it reached 11.2% year-on-year), by the end of 2015 growth in consumer prices will have reached the zone of 4% year-on-year. Key to redirecting inflation has been the shift towards tougher monetary policy by India's central bank under the direction of Raghuram Rajan, an economist of great renown who was appointed in September 2013. Rajan raised the reference rate from 7.25% to 8% in just two hikes between the end of 2013 and the beginning of 2014 and kept it at this high rate for almost one year. When inflation started to appear more contained, he slowly reversed this upward trend, down to the current level of 6.75%. Undoubtedly this monetary policy has been helped by the credibility of the central bank's governor in the eyes of investors even before he was appointed, a reputation such management has merely reinforced. As an indication of the appropriateness of this monetary policy, since the last episode of depreciation started among the emerging currencies in August 2015 the Indian rupee has been among those currencies best withstanding the pressure.

However, in spite of this positive performance by economic policy, more could be demanded from the country's fiscal policy. One recurring element in India's most recent fiscal strategy is a stronger focus on privatisation but the results to date appear to be mixed: the privatisation of the state steel industry started off badly while it is believed that the telecom spectrum auctions have been more successful. So far investors do not seem to be particularly concerned about the situation of the country's public accounts. However, a public deficit totalling 7.2% of GDP and public debt at 65.3% of GDP are taking some of the shine off India's brilliance and cannot be dismissed as minor details, particularly with a view to the future.

In fact, this will be the area on which India will ultimately be judged: will the light we can see, so brilliant and scarcely dimmed by any shadow, continue to shine in the near future? The predominant diagnosis is positive and our opinion is shared by analysts as a whole. Growth in excess of 7% is expected for 2016 and 2017 as a result of the solid performance by activity, fuelled by a combination of greater investment in infrastructures and a more accommodative monetary policy which started at the end of 2014 and will continue in 2016.3 Such boosts will be able to counteract the expected rise in commodity prices (presumably moderate) which will occur in 2016 and 2017. On a less tangible note but one we should not ignore, the credibility of two of the visible heads of India's new economic policy, namely Prime Minister Narendra Modi and the governor of the Reserve Bank of India, Raghuram Rajan, is still high and reputation is an asset that is not enjoyed by many emerging countries.

However, such positive prospects need to be qualified by at least two sources of risk. The first comes from the expected rise in commodity prices. Should the scenario of a gentle recovery actually turn out to be more serious with rapid, sharp increases in price, India will be facing a considerable headwind. The second concern comes from the little sensitivity shown by investors to India's relatively high levels of public deficit and debt. Given that these are expected to adjust relatively slowly (in 2016, for example, we forecast a public deficit of 7% of GDP and a public debt of 63.9% of GDP), should this complacence shown by investors regarding the fiscal imbalances of the emerging economies alter, then India would probably be at the heart of the discussion.

In summary, India seems to be a thriving star that will continue to shine in a firmament where the light from some emerging suns of previous years has gone out, if not forever then at least for a considerable period of time.

2. The two critical energy commodities for India are coal and oil and their derivatives. However, being an important importer of crude, the country has the world's fifth largest coal reserves.

3. In addition to increased public investment, the government's strategy regarding infrastructure development also includes a significant change in the legal framework which is expected to encourage public-private involvement in this area. 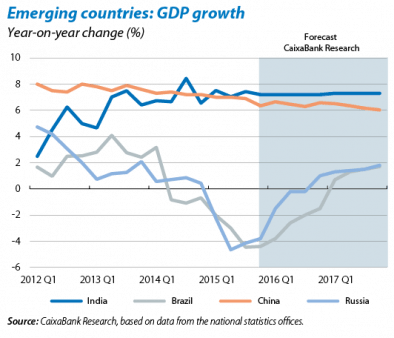 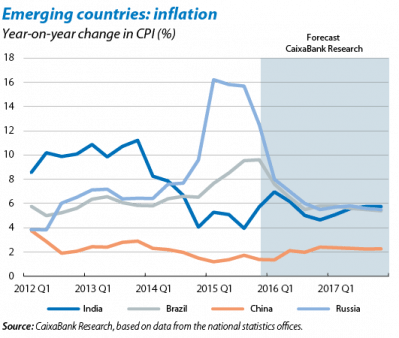