International markets are facing new setbacks. For a long time the euro area crisis had been a recurring source of negative surprises although, luckily, recent developments suggest that it is now under control, at least for the time being. Just a few months ago the overriding concern for investors was the possibility of a double dip recession in the USA but the latest figures have been surprisingly strong. However, May has not been a joyful month. The wall of
worries confronting investors has come up with two new obstacles. From our perspective one is predictable and the other not so much, although both will eventually be overcome.

Questions have again been raised concerning the «exit strategy» of the Federal Reserve (Fed). As fears dissipated
of the US falling back into recession, and given some signs of exuberance in parts of the capital markets, the Fed's own members have been responsible for reviving discussion about the tone of monetary policy. The commotion revolving around a possible halt to stimuli was to be expected given the scenario we projected of the progressive consolidation of economic growth in the USA.

The rate of expansion of emerging economies is disappointing. The latest figures published in key countries such as China or Brazil have been weaker than expected, both by the consensus and on our part. Somewhat hastily, those analyses interpreting this not as a temporary slump but as a shift towards lower and more unstable trend growth rates have gained ground in the media.

The yields on public debt have risen and riskier assets have suffered. This was particularly visible towards the end of May, after Ben Bernanke's appearance before Congress on the 22nd and the publication, one day later, of very weak business confidence figures in the Chinese manufacturing sector. The monthly figure, however, is neutral for most stock market indices. Something similar has happened with other risk assets, such as corporate bonds. Except in Japan, such volatilities have remained controlled: they have increased but from abnormally low levels, reaching figures that are still moderate.

The Fed will try to stop this financial instability from escalating. The rise in yields on bonds has been global in scope but its source is common: fears of the Fed announcing, in the near future, a reduction in its monthly bond purchases. Some observers believe that such a measure might be announced at its next Committee meeting on 19 June but we do not think this is very likely given the current economic and financial conditions. On the one hand, the rate of economic activity is actually consolidating although it is still modest and vulnerable. Moreover, inflation and inflation expectations have fallen lately (meaning that the increase in yields has been due to the real component). For their part, the excesses observed in some markets in terms of stock prices and risk taking (junk bonds, dividend recapitalizations, etc.) can be placated precisely through the «verbal interventions» provided by members of the Fed, as well as using other specific instruments. The confirmation of fewer bond purchases could give rise, at present, to unpredictable increases in yields, with generally destabilizing effects for which the economy is not yet ready.

In short, we are still of the opinion that the Fed will continue preferring to err on the side of too many stimuli rather than too little and will try to prolong accommodative monetary and financial conditions (which will continue to be easy even if the bond purchase programme eases up later on). Given this environment, the rise in US yields (with the consequent influence on the rest of the markets) should now slow up, picking up again within a few months when the rate of growth provides sufficient support.

The stock markets have been hit on both flanks, halting their gains. In addition to the «Fed effect» and rising yields, they have also been affected by the poor economic figures from emerging countries which represent the hope for global growth and therefore for large international companies. In the USA, the S&P 500 set a new record high in the middle of the month, among clear signs of overbuying and excessive optimism in the short-term sentiment indicators; in other words, conditions are ripe for correction. This corrective process will probably last for some time (the seasonal factor is not in its favour right now) but this should not result in large losses. Emerging stock markets have seen their attempt to consolidate an upward trend frustrated. Their situation is vulnerable until these countries' economies regain their strength, something we still expect to happen towards the end of the year. Meanwhile, the expected implementation of monetary and fiscal stimuli should help to support stock market prices.

Emerging currencies have depreciated and commodity prices have weakened. These two circumstances have had a notable effect on the currencies of emerging countries, greater than the impact perceived on their stock markets or credit spreads. This fall has been widespread, putting an end to a relatively stable upward phase that had lasted more than a year. As with the stock markets, the short-term prospects cannot rule out further falls but, in the medium term, the likelihood is for appreciation against the dollar and euro based on relative economic fundamentals. The Chinese yuan has been an exception, continuing its slow but firm appreciation and confirming the determination of the Chinese authorities to change their economic model. The dollar/euro exchange rate has remained stable. Commodity prices have been weak but only with modest losses. Brent oil stood at 100 dollars per barrel while OPEC announced that it will maintain its current production quotas.

Japan is experiencing great volatility in its bond market, yen and stock market. The instability of the yen (which has appreciated) and shares (which have fallen) seem logical corrections after the fast, uninterrupted movements that took place in previous months. However, the instability in the bond market is more intriguing. A benevolent interpretation is that this is due to transitory technical factors. Another more worrying interpretation is that it reflects a loss of investor confidence in the effectiveness of Abenomics. Invoking the first interpretation, which certainly seems more plausible, the Bank of Japan announced that it will up the frequency of its bond purchases in order to stabilize the market.

The euro area crisis is going through a time of respite but its resolution is not assured. The value of the euro, the sovereign spreads for periphery countries and also risk premia for bank bonds have remained relatively firm in spite of the increase in global instability. Specifically, Spain's spread with Germany for 10-year bonds has fluctuated within a narrow range around 290 basis points. The slight deterioration occurring towards the end of the month is due to the aforementioned external factors and not to any deterioration in internal conditions.

Investors have welcomed the political actions taken, some already in effect and others expected. On the one hand, the shift towards «more reforms and less austerity» in designing economic policy seems to have the blessing of the market, at least initially. Secondly, continued advances towards an institutionally reinforced EMU are reinforcing the perception of the irreversibility of the euro. A crucial date is approaching in this area: the European Council on 27 June, which must provide a definitive push towards banking union. The pre-election period is also approaching in Germany (elections will take place in September). Lastly, there is still confidence in the ECB's measures. In May it cut the official interest rate to 0.50% and is now expected to use unconventional instruments to improve financing for SMEs. The next meeting of the Governing Council will be on 6 June.

All these efforts could be in vain if economic activity does not improve. First of all, doubts might reappear regarding the sustainability of debt in some countries. Unfortunately Spain is not in the best of positions, now that its debt to GDP ratio is close to 90% while the target deficit is 6.5%. Moreover, social tensions would increase, not only in the periphery but also in the core countries such as France, once again testing political commitment to the euro. Under our scenario of a gradual recovery, both in the region as a whole and also in Spain, which will soon start to be noticed, these risks will not materialize and the basic trends for the markets will remain benign for the rest of the year: stability in monetary rates (the 12-month Euribor rate is now slightly below 0.50%), in German and euro yields, together with stock markets rallying. 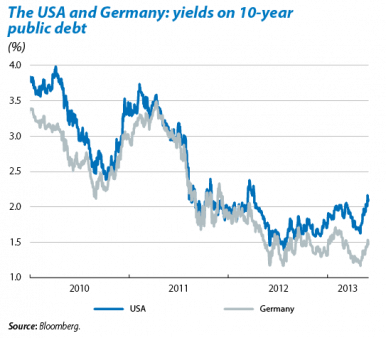 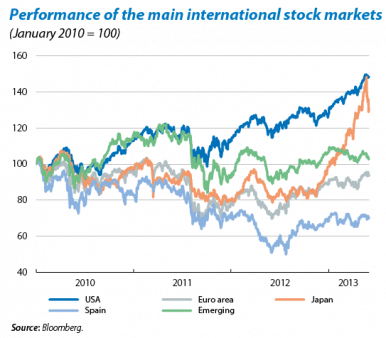 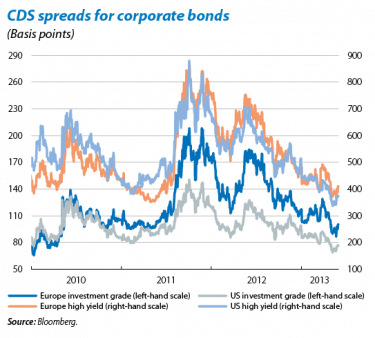 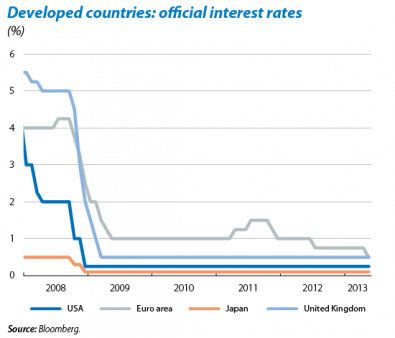 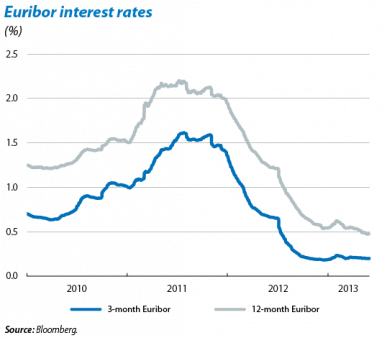 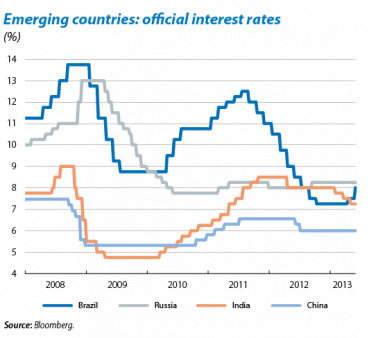 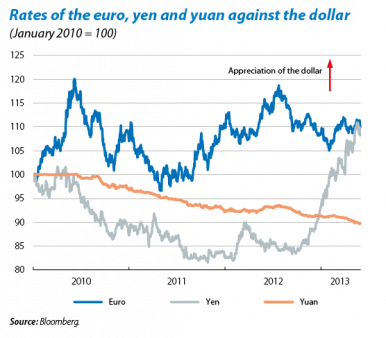 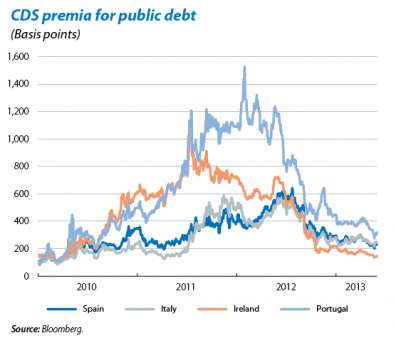 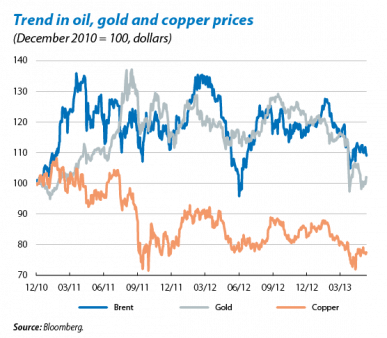