• Investment fell substantially during the financial crisis, but since 2013 it has shown significant recovery. However, this recovery is still insufficient to recover the levels of capital seen in 2007. For this reason, encouraging investment remains important in order to improve the Portuguese economy’s growth potential.

• On the other hand, the composition of investment over the course of the recovery has shown a promising trend, since investment in the most productive sectors of the economy has gained relative weight.

Although the total gross fixed capital formation (GFCF)1 is still 14% below the levels of September 2008, this is essentially due to investment in construction, which lies 31% below its level prior to the financial crisis. Nevertheless, as we shall see, the rest of the components of investment have exhibited a significant recovery.

Since 2008, there has been a notable reduction in the relative weight of investment in construction, which has fallen from 60% of GFCF in 2008 to 48.5% in 2019. This reduction is to be expected, considering the base effect of the significant investment in infrastructure and housing before the crisis. This has cleared the path for an increase in investment in more productive areas, such as intellectual property (16% of GFCF in 2019, +5.2 pps compared to 2008) and information and communication technologies and machinery (25%, +6.1 pps).

If we focus on investment excluding construction, the outlook is positive and there are signs indicating a change in the productive model, with an increase in the role of the industrial sector. With data up to June 2019, investment excluding construction stands 11.6% above the level of September 2008. This is driven by growth in investment in machinery and intellectual property, which stand 13.4% and 27.6% above their levels registered prior to the financial crisis, respectively.

The recovery in investment, both in total and in machinery specifically, is a phenomenon common to all industrial sectors. Of particular note is the strength of investment in the manufacture of transport equipment (with an annual increase of 25% and 28%, respectively, since 2008), in textile and clothing (with growth of 12% in a sector which, following the difficulties experienced in the early 2000s,3 has adjusted thanks to higher value-added production, with improvements in the design and incorporation of technology into the production process), and in wood and metallurgy.

The breakdown of investment by institutional sector4 helps to reinforce these favourable dynamics. Business investment, which is usually more productive, stands out as the best-performing sector. This greater buoyancy is evident since the early 2000s’, with an average annual growth of 2.7% (0.6% in the economy as a whole), but the recovery in the period following the financial crisis stands out in particular. Specifically, after reaching a low point in September 2013, business investment has recovered at an average annual rate of 9.3% (versus 6.3% for the economy as a whole). With data up to June 2019 (four-quarter cumulative figures), investment in the business sector represents around 69% of total investment in the economy, the highest level since the beginning of the 21st century. Meanwhile, household investment (usually linked to the acquisition of housing) represents 20.8% of investment. Lastly, the data relating to the general government sector (10.3% of the total) show how public investment was cut in response to the need to reduce the budgetary imbalance.

At the international level, investment as a proportion of GDP in Portugal (17.6%, including construction) remains below that of the euro area (21%). That said, there has been some convergence in terms of its composition, since investment in machinery, ITC equipment and intellectual property represented 40% of GFCF in 2018 (41.3% in the euro area), approximately 13 pps above that of 1998 (see fourth chart).

We estimate that the recovery in GFCF since 2013 has resulted in the stock of capital rising to 665.5 billion euros in 2018,5 representing an average annual nominal growth of 2.2% since 2013. However, as a percentage of GDP, capital still stands below the levels recorded prior to the financial crisis. Specifically, we estimate that in 2018 this ratio will have stood at around 330%, 4 pps less than in 2007 (see last chart). In this context, it remains important to provide a favourable investment environment in order to contribute to strengthening the recovery of capital stock and to have a positive influence on the economy’s production potential, productivity and growth.

2. Information available up to 2017. Analysis with constant prices.

3. In the early years of the 21st century, the increase in competition from more competitive markets significantly affected the activity of the textile sector, especially through the relocation of companies backed by foreign capital to more competitive economies.

5. This calculation is based on the equation Capital Stockt = Capital Stockt-1 + GFCFt (1 - δ), where δ is the depreciation rate, which is assumed to be equal to that observed between 2016 and 2018. 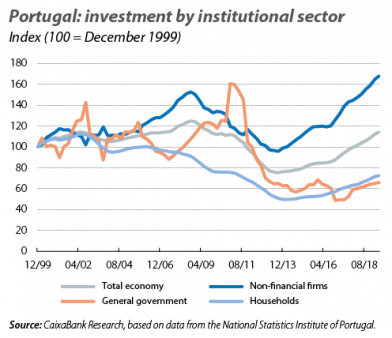 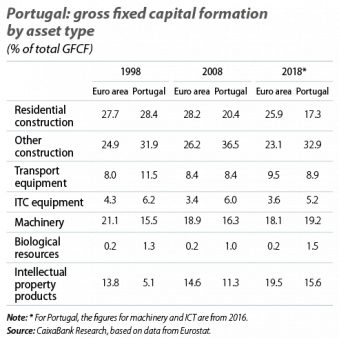