Mexico’s economic outlook depends on three events whose future development is uncertain. The first is the Fed’s monetary normalisation. The second is what the new North American Free Trade Agreement (NAFTA) will look like. And the third source of uncertainty comes from the presidential and parliamentary elections to be held on 1 July 2018, which could result in a political shift from the current President’s reformist focus.

However, according to CaixaBank Research’s main scenario the impact of these three factors is relatively limited. The tightening up of US monetary conditions is expected to be gradual while the Fed is taking great care with its forward guidance. In anticipation, Banxico has already raised Mexico’s benchmark interest rates and we expect any additional hikes in 2018 to be relatively minor. As a result, Mexican financial conditions will be less accommodative than in the past but should not stifle finance to any great extent.

Regarding NAFTA, although the start of negotiations for the most complicated points has led to uncertainty and penalised the peso, CaixaBank Research agrees with numerous analysts that the agreement will ultimately be constructive, adapting to the changes brought by the rise in digital trade and opting for a partial but not radical rebalancing of US relations with Mexico (and Canada).

Finally, concerning the upcoming elections, opinion polls point to victory for the Movimiento de Regeneración Nacional (better known as MORENA), led by Andrés Manuel López Obrador. The alternatives proposed by the incumbent party (PRI) or by a probable coalition between the PAN and PRD, currently in opposition, are less likely to win. There have certainly been concerns regarding MORENA’s excessively populist stance. Nevertheless,  the crucial (and widely supported) structural reforms of the previous legislature are unlikely to be reversed to any great extent. Electoral rhetoric aside, over the next six years the need for progress in two areas should once again be the focus of attention: greater investment in infrastructures and further fiscal reform focusing largely on indirect taxes.

The possible impact of these three sources of uncertainty can therefore be interpreted quite constructively. Nevertheless, investors are still delaying some of their decisions until the scenario becomes a little more predictable. Between 2017 and 2018 growth will therefore be in the order of 2%, slightly below the rate for the immediately preceding years. However, once this uncertainty has eased, Mexico should return to growth of around 2.5% without too much difficulty.

This being the baseline scenario, we should look at what would happen if the likely impact of monetary normalisation, NAFTA negotiations and political confrontation between election candidates turned out to be more  damaging than expected. First of all, the impact of these three elements differs greatly: while a breakdown in NAFTA negotiations or a new agreement that clearly penalises Mexico would strongly disrupt the economy, affecting the country’s growth potential, monetary normalisation and the elections should potentially have a much smaller and shorter negative effect.

In any case, Mexico is facing these hypothetical hurdles with relatively strong public finances. In 2017 the country should achieve the ambitious target announced by the government of posting a primary surplus, the first time in the last nine years. The public deficit in 2018 and 2019 is also likely to be somewhat lower than in the past few years, which should help to bring down public debt. This would allow Mexico to implement some countercyclical policies to offset adverse shocks, if necessary.

Regarding Mexico’s external vulnerabilities, the situation can be classed as a moderate risk. Its current deficit will probably remain at around 3% of GDP in 2017 (notably lower than in previous years) while its external debt will be 38.5% of GDP, a figure that, although not low, is clearly better than in previous years. Perhaps the one factor tipping the balance towards relative calm in this area is the fact that Mexico’s international reserves more than double its short-term external debt. 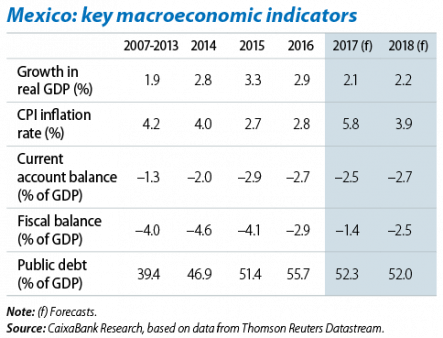