Post-Brexit uncertainty and its impact on economic growth

Brexit has surprised the British and foreigners alike and has placed future relations between the United Kingdom and the EU in limbo. Beyond the long-term economic impact of any agreement reached with the EU, in the short term uncertainty will make it difficult for the British economy to grow. Companies will delay decisions to invest and hire workers while households will reduce spending or postpone house purchases.

Analysing the impact of uncertainty is an arduous task. To begin with, it is quite difficult to measure. One of the indications used by analysts and economists is the economic policy uncertainty index developed by the economists S. Baker, N. Bloom and S. Davis. This index is based on the number of times the word «uncertainty» (or a similar word) is mentioned in the press.1 The idea is simple: if, in the month of June 2016, the word «uncertainty» appeared more often than in May 2016, uncertainty is likely to have increased. The authors have found that this index has a correlation with other methods used to measure uncertainty and that it is a reliable indicator of such episodes. As can be seen in the first graph, the largest spikes in the index coincide with 9/11, the failure of Lehman Brothers, the European sovereign debt crisis and the Brexit referendum.

However, once we have measured uncertainty, it is still quite complicated to analyse its impact on growth. To quantify its influence, we have analysed the historical relationship between the uncertainty index and British GDP2 using statistical techniques similar to those of Baker, Bloom and Davis for the United States.3 In June 2016, after the result of the referendum, the shock of uncertainty observed in the United Kingdom was large, equivalent to six times the standard deviation for the series. This increase in uncertainty will have a significant effect on growth. As shown by the second graph, according to our calculations it will bring about a 0.7 pps reduction in the level of GDP six months after the shock. Uncertainty might also affect the UK’s stock market, in line with the arguments presented in the Focus «Uncertainty and stock markets» in this Monthly Report.

In summary, it will be crucial to reduce uncertainty during the long negotiation period that is just starting in order to minimise its negative impact on the economy. It would be better if it did not take 10 years, as was the case between Switzerland and the EU, to develop an agreement via a series of bilateral agreements.

1. The Times of London and the Financial Times are used for the United Kingdom. For more details on the construction and an exact definition of the Economic Policy Uncertainty Index (EPU), see http://www.policyuncertainty.com/.

2. A first-moment vector autoregression is estimated that includes monthly data from uncertainty indices for the United Kingdom and for Europe, the log of the FTSE 250, the yield on British 10-year bonds and log employment, as well as log GDP, in that order. Including the European uncertainty index allows us to differentiate between uncertainty due solely to the British economy and that due to the EU. 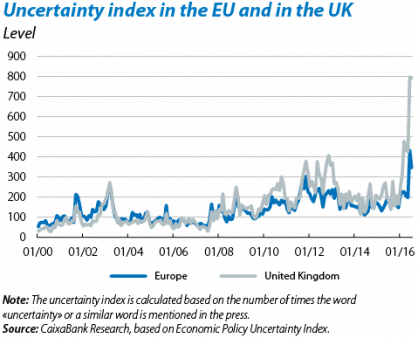