• After Brexit, the United Kingdom and the EU will have just 11 months to reach some sort of agreement before the transition phase expires. All the indicators point towards a free trade agreement that leaves aspects such as services and the movement of people to be determined later.

Negotiations to reach a new framework for relations: a race against the clock

One might be forgiven for thinking that after the United Kingdom’s departure from the EU at the end of January, the uncertainty that has surrounded Brexit in recent years is going to dissipate in 2020. However, as we shall see in this article, the formalisation of Brexit on 31 January will open up new questions.

2020 will be a year in which the United Kingdom will be in a transitional phase, since it will begin to negotiate the new framework for future relations with the EU, although it will still remain in the single market and the customs union. This negotiation will take place with an extremely tight schedule (see first chart): once Brexit is consummated on 31 January, the transition phase will begin, which is due to end on 31 December 2020. Thus, the United Kingdom and the EU will have just 11 months to reach and ratify some sort of agreement. Furthermore, the United Kingdom can only request an extension to the transition phase up until 1 July 2020, although Johnson’s government has already announced that it has no intention of doing so (in fact, the draft bill approved in December 2019 to seal the withdrawal agreement included a new clause prohibiting the government from extending the transition phase).

Therefore, a no-deal exit at the end of 2020 cannot yet be ruled out (the United Kingdom could end up trading with the EU under WTO rules). This would occur if the two parties fail to reach an agreement during the year and the transition phase has not been extended beforehand. Nevertheless, the likelihood of this scenario playing out appears relatively low given the negative consequences it would entail, especially for the United Kingdom.

In any case, what we must surely do is adjust our expectations regarding the type of agreement that is going to be reached. While it is not realistic to achieve an ambitious and comprehensive framework for relations in only 11 months (10 if we take into account that the EU will receive a mandate to negotiate at the end of February), it is feasible to reach agreements on more limited but important aspects. An agreement of some sort, even a shallow one, would allow a no-deal exit to be avoided and would begin to pave the way for more comprehensive agreements in the following years.

What type of agreement seems most likely? One element to take into consideration is that an agreement that does not affect the competences of the Member States would allow for a quick approval in the European Council and Parliament, whereas one that affects national competences would need to be approved in each of the parliaments of the EU’s Member States. The latter would involve a demanding process, unlikely to be completed in 2020. As such, it appears likely that the EU and the United Kingdom could focus on reaching a free trade agreement of goods similar to that which the EU has with Canada. This would involve establishing zero tariffs and quotas for the United Kingdom’s access to the goods market of the 27 Member States in exchange for the country’s regulatory alignment on goods (such an alignment would not require the deal to be approved in the national parliaments, since it would fall under EU law and would be very similar to existing agreements that the EU has with other countries).

Otherwise, there would be insufficient time to reach an agreement in 2020 that covers aspects such as services, intellectual property, the movement of people, energy, domestic defence and foreign policy. In areas such as services, the United Kingdom is unlikely to accept alignment with EU legislation, as it seeks greater regulatory autonomy (alignment would give its booming financial services reasonable access to the EU market, albeit less than the level of access it enjoys at present, since by leaving the EU the UK’s financial sector will lose the European passport that allows it to offer its services without restriction throughout the EU). As for mobility, controlling the free movement of people is one of the objectives being pursued by Brexit. In other areas (such as energy and intellectual property), the negotiations affect Member States’ powers. In all such areas, entering into far more complex and laborious negotiations, for which 2020 offers little margin, seems inevitable. Therefore, one likely outcome is that the free trade agreement could refer to future negotiations in these other areas and that the transition phase could be extended only for those aspects on which it has not been possible to reach an agreement.

In the end, the key factor will be what negotiating tactic is adopted by the British cabinet. Its dilemma lies in whether to reach a quick agreement with the EU in 2020, which could imply granting significant concessions to the EU on regulatory alignment, or to try to delay the negotiations and continue negotiating on more advantageous terms in subsequent years at the expense of prolonging the uncertainty affecting British businesses and consumers. What stance will Johnson adopt? The only certainty is that the path will be complex and, precisely, fraught with uncertainty.

The economic impact of Brexit negotiations: a quantitative exploration

The unknowns set out in the previous section, added to the fact that a somewhat unambitious agreement seems likely in 2020, highlight that uncertainty will continue to affect the behaviour of businesses and consumers.

In order to shed some light on the potential impact of Brexit in 2020, we have used the Brexit barometer created by Bloomberg, which measures multiple aspects of the performance of the British economy.1 This indicator has two major advantages: it has a strong correlation with the United Kingdom’s GDP growth and it is published in real time, which allows trend changes to be easily captured.

We have worked with two very different scenarios. On the one hand, the scenario with a «pragmatic Boris Johnson» would be similar to the period between 17 October 2019 (when the withdrawal agreement between Johnson and the EU was announced) and 20 December 2019 (when the House of Commons approved the agreement). In particular, we have projected the trend of gradual improvement in the barometer in that period and we have assumed that it will continue in 2020.

On the other hand, the «adverse» scenario forecasts that in 2020 the barometer will follow the same trend as it did in the year following the referendum in June 2016. This was the period in which fears over the outcome of Brexit were particularly acute, resulting in a significant decline in the barometer.

In this way, we predict what the economic growth of the United Kingdom’s GDP would be in 2020 on the basis of these two trajectories of the Brexit barometer in order to get an idea of what the impact on growth could be. The difference between the two scenarios is by no means negligible: GDP growth would be 1.6% in the case of a scenario with a pragmatic Boris Johnson, and only 1.1% in the case of an adverse scenario. As for the impact on the euro area, we estimate that the difference in GDP growth between the two scenarios could be approximately 0.2-0.3 pps.2

In short, this small quantitative incursion appears to predict the damage, albeit not of excessive proportions, that a scenario of uncertainty persisting in 2020 would entail for the British economy. One possible explanation for this is that the British have learned to deal with uncertainty. Nevertheless, the medium-term consequences of failing to reach a sensible, balanced and mutually beneficial agreement with the EU (not to mention a hard Brexit at the end of 2020) would clearly be detrimental to the outlook for both the British and the European economies.

1. Specifically, these aspects are: inflation, economic activity, employment and uncertainty. 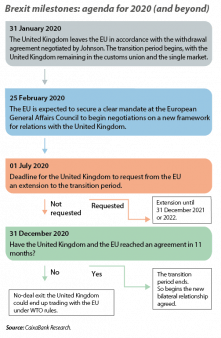 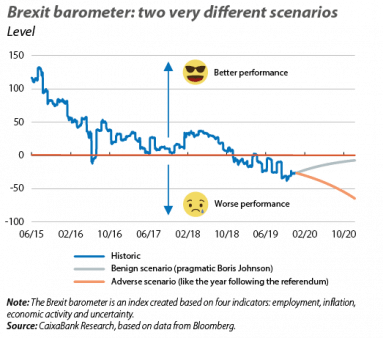 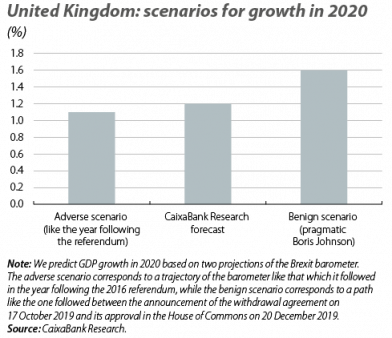 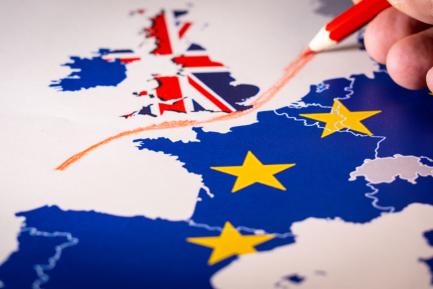