The recession ends and growth prospects improve. GDP in 2013 Q3 increased by 0.1% quarter-on-quarter, the first positive growth rate for the last two years. This change in trend is being accompanied by an upward revision of growth prospects both by the main international bodies and also the consensus of analysts. The OECD, for example, has improved its GDP growth forecasts slightly and has notably lowered the unemployment rate predicted both for this year and especially for 2014. The revision of forecasts by the consensus of analysts occurring over the last few months has also been notable. Specifically, the GDP growth forecast of the OECD for 2014 has increased by 0.3 percentage points over the last three months, up to 0.5%.

Domestic demand joins the recovery. The Spanish economy embarked on the road to recovery with the foreign sector as its only ally. However, domestic demand finally made a positive quarter-on-quarter contribution to growth in 2013 Q3 (+0.3%), although in year-on-year terms it was still in negative terrain. Moreover, this change was  accompanied by a significant advance in household consumption (+0.4% in quarter-on-quarter terms). Although this is good news, such a change in trend must be taken with the utmost caution. The recovery in household consumption will continue to be limited by deleveraging and any advances that can be made in the labour market, so such figures are very unlikely to continue over the coming quarters. This upswing is probably due to the change in perception occurring in short and medium-term growth prospects. This means that decisions to consume are starting to be taken that had been postponed due to the great uncertainty surrounding the macroeconomic scenario.

Investment builds up steam. Although it usually posts more volatile figures than consumption, the positive growth rate of investment in Q3 is also significant (0.2%). In fact, the trend in investment in capital goods (0.8% in 2013 Q3) came as some surprise as it has now posted three quarters of positive quarter-on-quarter growth. Moreover, the rate of increase has been quite considerable: on average, quarter-on-quarter growth has been 1.8%. This is a sign that, at least at a business level, confidence in activity's capacity to recover has notably improved. Moreover, the bulk of the evidence available suggests that this trend will continue in the coming quarters. A good sign of this is the recent performance by the PMI, maintaining a clearly positive trend in both manufacturing and services and remaining at levels close to 50 points, the figure as from which positive growth rates are usually recorded.

The good performance by industrial orders bodes quite well. There are two notable facts: (i) the decline in domestic demand is slowing down and (ii) the euro area market is improving. The first confirms the impression that the slump in domestic demand seems to have bottomed out and it might start to rise. The negative trend in orders from the euro area halted in 2013 Q1 and, since then, has risen considerably. For example, this September the  year-on-year change was 3.8% (moving average of 3 months), compared with 2.7% in August.

Exports are stalling. The export sector is still driving the recovery but, as already noted, its contribution to growth
fell appreciably in Q3. In the first half of the year exports of goods grew by 8.0% year-on-year in nominal terms while in Q3 they grew by just 4.4%. Note that this slower rate of growth has occurred in spite of the improvement in exports
to the European Union. One of the main reasons for this smaller increase is the USA. In the first half of the year the United State's imports of Spanish goods grew by 5.4% while in 2013 Q3 these fell by 12.0%. One of the questions arising is whether Q3 was a special case or if the growth potential of Spanish exports is actually lower than predicted. Another change in trend worthy of note concerns imports. In this case, the trend is the opposite: these have stopped falling as much as in Q1. In particular, in 2013 Q3 imports decreased by 0.6% while, in the first half of the year, they were down by 3.2%. One part of this improvement is due to temporary factors such as the increase in automobile sales, boosted by the PIVE plan that subsidises purchases. However, the rise in imports is also due to an upswing in domestic demand. In any case, the recent trend shown by exports and imports has forced us to revise our forecast downwards slightly for the current account surplus at the end of 2013, from 1.8% of GDP to 1.4%.

The foreign sector supports the labour market. The foreign sector has also been one of the keys to the recovery in employment. For example, those industries with the highest percentage of sales abroad created the most jobs in Q3 (see the Focus «Internationalisation: an opportunity for employment»). We have also observed a rise of 54,927 registered workers affiliated to Social Security in October (compared with September), in spite of the loss of contributors recorded by the tourism sector. This decrease is normal given the end of the tourist season and is similar to the one that occurs every year. However, the remarkable fact is the change in trend in the non-tourism sector, which does not usually post a positive change in the number of contributors in October. However, we must interpret these figures with caution as a considerable part of this increase is due to non-recurrent growth in the education sector, given the start of the academic year.

The spectre of deflation diminishes. The inflation rate increased by 0.3 percentage points in November to stand at 0.2%, thereby putting a stop to fears of deflation. Inflation's surprising negative growth in October (–0.1%) raised questions as to a possible deflationary spiral that might affect the incipient recovery of the Spanish economy. However, as we already mentioned last month, the likelihood of this scenario coming true is, at present, very limited. The sharp drop in the rate of inflation over the last few months is largely due to temporary factors such as the lower price of energy products. However, it should be noted that we do not believe inflation will reach levels close to 2% very quickly. Domestic demand will recover very gradually so pressure on prices will continue to be very tepid. Moreover, the significant effort being made by the Spanish economy to continue gaining in terms of price competitiveness will also provide some room for inflation to remain at abnormally low levels.

The banking sector enters the last phase of the troika programme. The NPL ratio of Spanish banks rose sharply this September: from 12.1% in August to 12.7% in September. This increase occurred fundamentally because of (i) the reduction in credit (subsequently pushing up the ratio) and (ii) the reclassification of some loans to meet the new criteria established by the Bank of Spain. This second aspect is the most important and, given that it is a  non-recurrent reclassification, it will not affect the future trend for the NPL rate, so we expect the rate of increase to fall considerably over the coming months. Similarly, in the Bank of Spain's survey on banking, an improvement can be seen in expectations to grant credit in Q4. This month the IMF has also published its report assessing the progress made by the banking sector. The overall evaluation is positive but the IMF reiterates just how critical it is to have a well capitalised system in order to maximise the credit capacity of financial institutions. Finally, the IMF has set the European Union as a whole its homework. Once again it notes the need to achieve the Banking Union which will help to reduce market fragmentation (between periphery and core countries), originally caused by the sovereign debt crisis but still persisting.

The deviation from the deficit target might be small. In October, the government deficit reported slightly worse figures than the same month one year ago. The autonomous communities are not managing to adjust their deficit compared with last year's figures either, although neither has the situation got any worse. In both cases, therefore,
the year will probably end with a slight deviation from the target established. However, both Social Security and local government corporations are showing a better trend than expected, reducing the deviation in the deficit for general government as a whole compared with the target set. 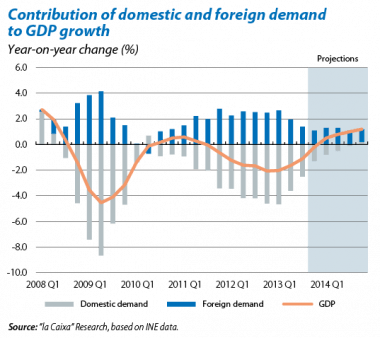 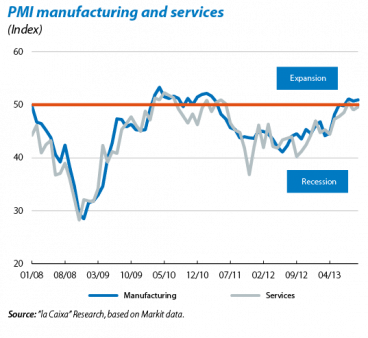 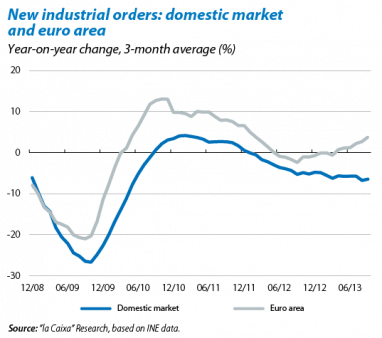 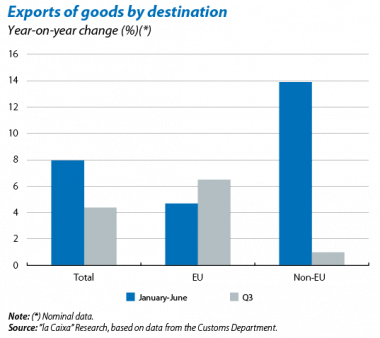 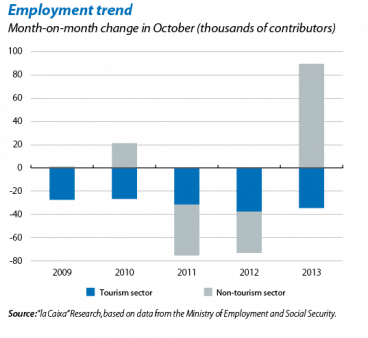 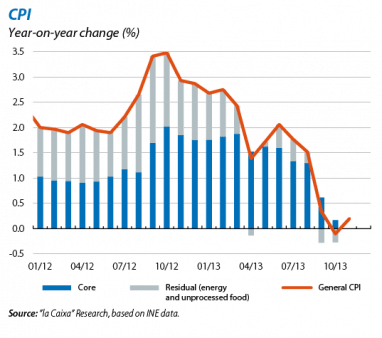 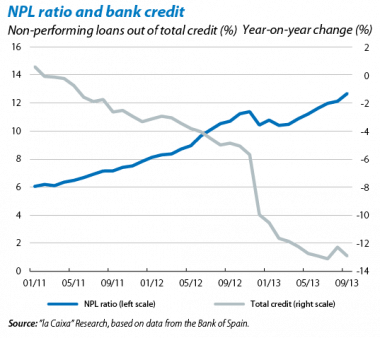