Russia at the crossroads

Among the emerging economies, Russia's recent growth figures are surprisingly disappointing. Should the IMF's forecasts be accurate, Russia will have grown by a meagre 1.5% in 2013. Out of the large emerging economies, only Mexico is likely to post less growth for the year. This performance raises questions as to the country's economic possibilities, both in the short and medium term.

The situation in the short term has been dominated by weak exports (hindered by the euro area's slump in demand for energy), by lethargy in public consumption and listless private investment. As a result, growth declined to 1.2%   year-on-year in Q2, with this poor figure being repeated in Q3. The fourth quarter does not appear to have been much better. However, for 2014 we expect the euro area's recovery to revive foreign demand in Russia. After the initial boost provided by exports would come the turn of investment. Similarly, the likelihood of energy commodity prices rising should provide considerable support for growth since exports of oil, gas and their derivative products account for 17% of Russia's GDP. All this suggests that the economy will grow by 3.0% in 2014. In spite of this expected upswing, however, our belief is that the Euro-Asian giant will only grow on average by 3.4% over the next five years, a figure clearly below that of other emerging economies and a situation that is also unlikely to change in the next two decades. So what factors are responsible for Russia lagging behind in a context of a global recovery in activity? Although interpretations vary, many agree on the need for another wave of structural reforms and the effects of a demography in decline.

In the area of reforms, there are two aspects that are believed to be crucial. Firstly, to overcome a series of bottlenecks in production that have been observed since the first decade of the new millennium. To cite a particularly significant case: growth in oil extraction capacity has slowed down considerably since 2004. This means that the country cannot fully take advantage of periods when commodity prices are on the rise. Another area of deficiency lies in public investment, particularly in infrastructures. With regard to the population situation, the fundamental problem is that Russia is facing a sharp decline in its population, something that is not very typical among emerging economies. Between 2013 and 2035, Russia will lose 13 million inhabitants, close to 9% of its current population, as a result of the low birth rate and a positive but small migratory balance. Given this situation, by 2015 Russia will have missed its so-called «demographic window» (when those aged under 15 account for less than 30% of the population and those aged over 65 do not account for more than 15%). When a country has this «window», the population's production and consumption capacity is at a peak in terms of the demographic cycle. By way of comparison, another emerging country also facing a complicated demographic situation, namely China, will not lose its «demographic window» until 2025.

To relieve this negative pressure resulting from its demographic decline and ageing population, Russia would have to speed up its structural reforms to boost the recapitalisation of the economy (by improving its human and technological capital and infrastructures), as well as carrying out changes in the institutional area (especially regarding governance, justice and the business environment): all seen as recipes to promote the constant acceleration of productivity. 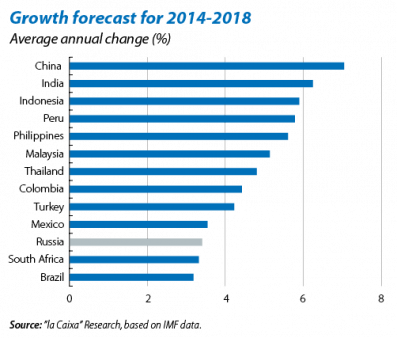 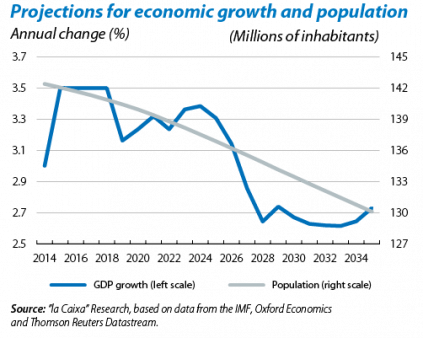