If we are to believe the overwhelming advantage indicated by the polls, Vladimir Putin will win Russia’s presidential elections on 18 March. It is therefore relevant to ask what might be expected from his fourth presidency (2018-2022) in terms of economic growth. The quick answer is «not much». Forecasts point to moderate acceleration in economic activity growth, from the 1.5% estimated for 2017 to around 2% in 2018 and 2019. Medium-term projections suggest Russia will post the smallest GDP growth of all major emerging economies in 2017-2027. So what is the reason for this low growth?

Three key factors weigh heavy on the Russian economy: its dependence on commodities, demographic decline and institutional quality with room for improvement. The first factor may come as some surprise since most analysts predict moderate price rises in oil for the years
of Putin’s presidency. However, the key word here is «moderate»: the boom occurring in the first half of the 2000s will not be repeated. Most analysts also expect natural gas to fall in price over the coming years. This results in a relatively poor prospect for Russia as both products account for 60% of its exports and 35% of its tax revenue.

The country’s demographic situation is the second challenge facing the Russian economy. Although its decrease in population may not seem extraordinary (in 2022, the number of inhabitants will be 0.4% fewer than today, around 500,000 people), the reduction in the working age population will be substantial. Some projections put this decrease at 7% during the next presidency (around five million workers less).

Finally, the quality of the institutional environment to develop economic activity is still far from satisfactory. According to the World Economic Forum’s Global Competitiveness Report, although Russia is the 38th most competitive economy (out of 137), its institutions rank just 83rd. Moreover, some of the most important institutional variables in terms of protecting investment, such as defence of copyright and judicial independence, ranked 116 and 90 (out of 137), are way below standard.

Given this situation, a logical response by economic policy would be to promote far-reaching structural reforms. But Putin did not take this course in his last presidency, when he actually shifted more towards protectionism, greater public sector involvement in the economy and less market freedom. Nor does it seem to be a priority in his future political agenda. To really understand this stance, we have to look at how economics is perceived in Russia and its relationship with politics. Promoting economic success as much as possible tends to be important in liberal democracies. However, in Russia, de facto, the economy is traditionally seen as a political tool. Consequently, provided the level of prosperity is acceptable (and Russians have a greater tolerance of shortages in this respect than people in the West), Russia’s economic resources are used to underpin its political goals.

One clear example of this is Russia’s foreign policy, an area of particular interest for the rest of the world since it forms part of that sizeable ragbag known as «global geopolitical risks». Russia’s foreign policy has been strongly proactive in the past ten years, using conventional diplomatic instruments but also resorting to economic measures to pursue political aims, and even military intervention in various armed conflicts. Ultimately, the country’s commitment to this foreign stance can be seen in its military spending. This has increased non-stop, going from 3.4% of GDP in 2011 to 5.4% in 2016, in spite of the strong recession in 2015-2016 and the sanctions imposed by the US and EU.

Such a proactive foreign policy is strongly supported by Russians, 87% of whom agree with the President’s current approach to foreign affairs. The use of the economy for political aims is therefore unlikely to change over the next few years. The key word is «continuity». Or, as we said in the title, politics as usual. 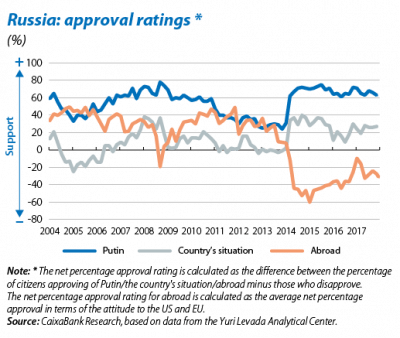