A slight slowdown, as expected

Growth looks like continuing. The Spanish economy has been growing for three years at an annual rate of more than 3%. This trend has been confirmed by the recent revision of the GDP series, carried out by the INE every September. Growth in 2015 and 2016 was also slightly higher than previously announced. Neither has there been a change in the international tailwinds boosting the Spanish economy over the past few years. These are euro area growth, the destination for just over half Spanish exports, low interest rates, and the moderate recovery in oil prices. The only doubts are the effect a stronger euro might have on export volumes, one of the economy’s main drivers. But the impact of the euro’s appreciation could be offset by recent productivity gains and contained labour costs. A strong euro also reduces the energy bill. This will help to contain the increase in energy imports in nominal terms.

Q3 economic activity indicators suggest a modest slowdown compared with the fast growth posted in Q2. CaixaBank Research’s leading GDP indicator for Q3 shows 0.8% quarter-on-quarter growth, slightly below the 0.9% in Q2. This slight moderation in the growth rate is in line with CaixaBank Research forecasts and does not substantially detract from the Spanish economy’s good performance. We have therefore kept our GDP growth forecast for 2017 unchanged at 3.1%. A more detailed analysis shows that supply indicators such as PMI business sentiment indices fell in August but are still in the expansionary zone, especially in services which account for most private employment. The Economic Sentiment Index was stronger, rising to 109.9 points in September, clearly above the average for the first six months. Demand picked up, with retail sales posting 1.6% year-on-year growth in August after a three-month slowdown. This suggests that private consumption, the largest GDP component with a share of almost 60%, is still one of the key drivers of economic growth. For a detailed analysis of the factors driving consumption growth, see the article «The recovery of consumption in Spain: reasons and outlook» in this Dossier.

The labour market remains positive. The job creation rate slowed down in August to 3.4% year-on-year (3.6% in July). As tends to happen in August, the number of registered workers affiliated to Social Security decreased (by 179,000 people, not seasonally adjusted). But on this occasion the decline was larger than in previous years. The seasonally adjusted figure also provided a drop of 14,976 people. In the past few 12 months, however, the number of people affiliated has risen by more than 600,000. After August’s dip, we expect the favourable trend in the labour market to continue. In this context, hourly labour costs grew by 0.3% quarter-on-quarter in Q2 2017 (–0.2% in Q1 2017) according to the harmonised labour cost index, continuing the trend of moderation observed in the past few years. More specifically, the wage rises agreed in August were a contained 1.3%.

Temporary rise in inflation. Headline inflation increased by 0.3 pp to 1.9% in September. Although the details by component are not available, this rise might be due to the prices of food and non-alcoholic beverages. Inflation had already risen by 0.1 pp in August, up to 1.6% due to the upswing in fuels (7.0% year-on-year). Nevertheless, price increases are still very contained, as shown by core inflation which fell by 0.2 pp in August to 1.2%. Most of this decrease was due to the combined slowdown, in year-on-year terms, in the price of package holidays, whose 6.2% year-on-year rise was nonetheless lower than its July figure (8.2%), telephone services and insurance. Over the coming months, headline inflation will slow down until February 2018, mainly due to base effects of electricity prices. One year ago there was a sharp upswing in electricity prices that ended in January 2017 (when prices were 19.3% higher than the previous August). For the year as a whole, the CaixaBank Research forecast still predicts 1.8% for headline inflation and 1.1% for core inflation.

The foreign sector continues to perform well. July’s current account stood at EUR 20,892 million, 1.8% of GDP (cumulative over 12 months), only 0.1 pp below the peak reached in December 2016. Exports of goods and tourism are strong and the income balance is gradually improving, benefiting from low interest rates. This is offsetting higher oil prices, which are no longer rising as quickly as earlier in the year, and the increase in domestic demand, resulting in a bigger appetite for imports. Customs data for July show that exports of goods grew by 6.8% year-on-year (cumulative over 12 months), the highest growth rate since July 2012, while non-energy exports, more closely related to underlying trends, also grew by a strong 5.9%. Imports also speeded up, supported by domestic demand and higher oil prices, posting 7.7% year- on-year growth (6.2% year-on-year for non-energy imports). The tourist season continues to break records. In August, 10.4 million foreign tourists came to Spain, 10.1% more than August 2016 (cumulative over 12 months). Tourism income contributed 5.1% of GDP to the current account surplus up to July (cumulative over 12 months), while payments by Spanish tourists abroad totalled 1.6% of GDP, resulting in a net tourism balance of 3.4% of GDP. CaixaBank Research predicts a current account surplus of 1.8% of GDP for 2017 as a whole.

The Q2 general government deficit stood at 2.1% of GDP (including local government corporations). This represents an 8 pp adjustment compared with the Q2 2016 figure, just over half the 1.3 pp required to achieve the deficit target of 3.0% of GDP in 2017 (3.1% including bank restructuring costs). This positive trend in national accounts will help to achieve the deficit target. It will also be helped by the impact of contingencies resulting from the toll road bail-out very probably being allocated entirely to 2018. By administration, the central government deficit, whose data are available up
to August, fell to 1.8% of GDP compared with 2.9% in August 2016. Social Security, with data available up to July, also posted a deficit of 0.5% of GDP (the same figure as July 2016), while autonomous communities posted a zero balance, improving on July 2016’s figure by 0.1 pp.

The real estate market remains positive. The house prices published by the INE, based on transactions, rose by 5.6% year-on-year in Q2 (2.0% quarter-on-quarter) and are tending to speed up. This recovery in the market is very uneven, however. While prices rose by 10.9% and 9.3% in Madrid and Catalonia, respectively, in Castile-La Mancha, Extremadura and Murcia gains were 0.8%, 0.4% and 0.3%, respectively, with a 3.0% fall in Asturias. There was a surprising decline in the prices published by the Ministry of Public Works, which are based on valuations. These rose by just 0.3% quarter-on-quarter in Q2 (1.6% year-on-year), a slowdown compared with the 0.9% posted in Q1 although such fluctuations are typical for this series. In demand terms, house purchases in the first seven months rose by 13.8% year-on-year (13.5% cumulative over 12 months), slightly above expectations (see the Focus «Leaving home: a dream or reality for young adults?» in this Monthly Report, on household formation). Regarding the supply of housing, new building permits increased by 14% in May (cumulative over 12 months). Although this figure is almost double the level of December 2014, it is only one fifth of the average for the period 1995 a 1999 (both inclusive).

Positive trend in new bank loans. In July, new loans granted to households to purchase housing were up 16.6% year- on-year YTD, reflecting the recovery in real estate demand. New consumer loans are slowing down slightly but growth is still high (17.2% year-on-year YTD). The favourable trend continues for loans to SMEs (8.0%) and new transactions for large firms grew for the first time since the beginning of 2016 (0.2%). Given this extremely dynamic situation for bank credit, the NPL ratio increased slightly in July up to 8.47%. Nevertheless, the current NPL ratio is still the lowest for the past five years. It is likely to fall further over the coming months due to sales of portfolios of non-performing assets. 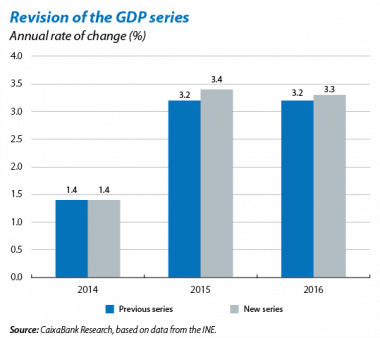 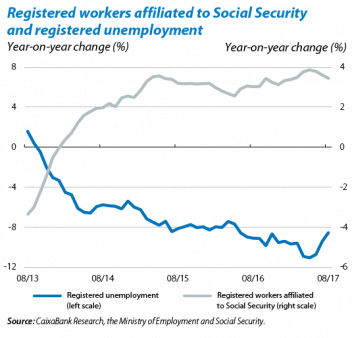 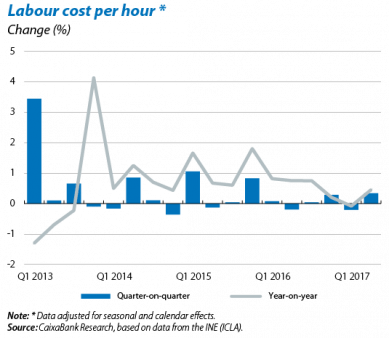 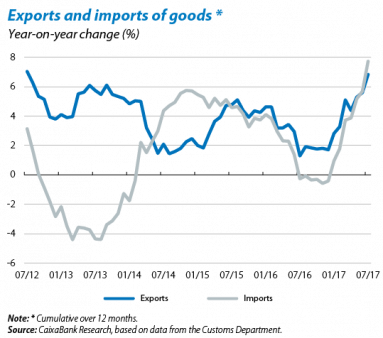 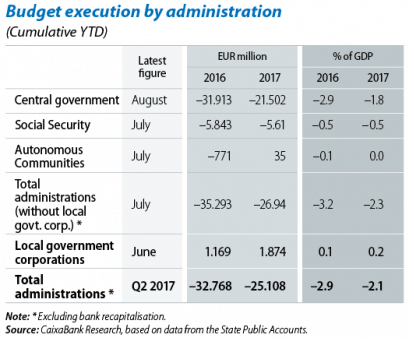 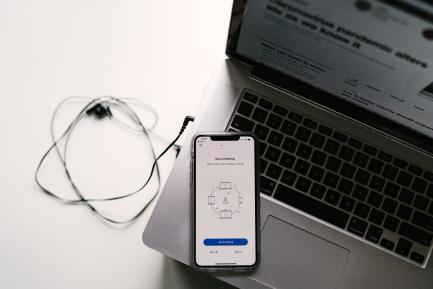 The COVID-19 Crisis: an unprecedented shock 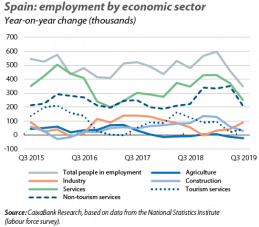