South Africa is one of the emerging countries that have been catching the eye of analysts’ for some time now. This is thanks to its importance for the region (it is Africa’s second largest economy with important links with the rest of the Sub-Saharan countries). But the main reason it has taken center stage is due to its economic slowdown (from growth rates around 4% early in the millennium to 0.4% in 2016) and its increasing macroeconomic imbalances. Of particular concern is the country’s great dependence on external financing and the sharp rise in public debt, reaching 50.5% of GDP in 2016.

The departure, at the end of March, of its renowned Finance Minister and other senior public figures who formed part of the most reformist section of the government, and subsequent credit rating downgrades by S&P and Fitch, have complicated the country’s already deteriorating economic prospects even further. The fact is international investors’ confidence in the country’s desire to carry out reforms was largely dependent on the now-departed Finance Minister, Pravin Gordhan, who had announced an important fiscal consolidation plan.

Although growth is expected to speed up slightly over the coming years and approach 2%, this declining confidence in the South African economy is dangerous, especially given the country’s external vulnerability which makes it highly sensitive to investor sentiment. Specifically, South Africa has a high current account deficit, averaging 4.3% of GDP over the past three years. Moreover, external financing tends to be through portfolio flows and other investment different from foreign direct investment (FDI), the latter much more stable over time. The country’s rating downgrade to speculative grade could therefore result in sudden foreign capital outflows and considerably push up financing costs. Gross external debt has also increased significantly, reaching a considerable 45% of GDP (from around 22% in 2007). The country’s international reserves, a cushion for external crises, are too close to what is considered to be a minimally safe level: they cover 4.2 months of imports of goods and services and 117% of short-term external debt.1

Nevertheless, there are a few positive notes in this bleak external panorama. Such as the country’s flexible exchange rate and the fact that a significant proportion of its external debt is rand-denominated. Specifically, 50% of its external debt is foreign currency-denominated compared with over 75% for most emerging countries. Most of this is also corporate debt and companies are usually better able to handle exchange rate risk since most debt is held by commodity exporters. On the other hand, the government has primarily issued bonds in rand: over 85% according to data from the Institute of International Finance (IIF).

Hence, the fact that the country’s rating downgrade has been for foreign currency-denominated debt and not rand-denominated (at least by the two most renowned agencies), provides some relief, at least in the short term. However, in order to regain investor confidence, South Africa needs to present an action plan that ensures the sustainability of its public finances in the medium term, as well as an agenda of structural reforms to improve the country’s growth prospects.

1. According to the IMF, the standard limits for reserves tend to be 3 months of imports and 100% of short-term external debt. 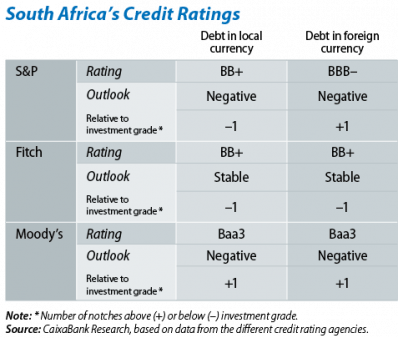 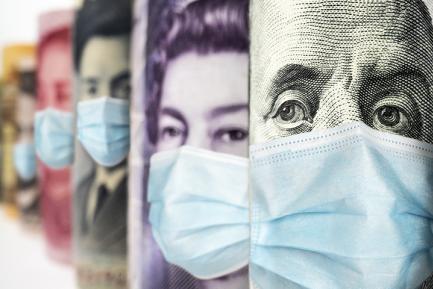