From a constructive perspective, the long economic crisis has led to a number of reforms being implemented that are crucial to laying the foundations for sustained economic growth which would have otherwise been unlikely. For example pensions, labour legislation, the tax and financial system are all undergoing extensive reforms. However, the agenda of reforms has advanced on other fronts that may not be quite so obvious but are also important, such as changes in the insolvency act and in active employment policies.

Regarding insolvency legislation, considerable modifications have recently been made to the refinancing and restructuring of corporate debt, altering the phase prior to insolvency (Royal Decree Law or RDL 4/2014) and during insolvency proceedings (RDL 11/2014). The aim of such measures is to help companies that are economically viable but in financial difficulty to continue in business, which is beneficial not only for the firms themselves but also for the economy in general. Under previous legislation, as debtors had to repay their debts using all their personal assets, in most cases they tended to postpone insolvency proceedings until the situation had become untenable. It was also very difficult for companies to reach an agreement with their creditors in order to refinance or restructure their debt.

The creation of a «limited liability entrepreneur» (Act 14/2013 supporting entrepreneurs and their internationalisation) helped to protect private residential property during insolvency proceedings, albeit under conditions that could be rather restrictive. RDL 4/2014 also established that enforcement proceedings on a debtor's assets could be suspended while negotiations were being held with creditors. Both measures should help to protect a debtor's assets and thereby encourage them to begin insolvency proceedings sooner.

To help all parties reach an agreement, it is now easier for a majority to be established among creditors that determines the conditions for restructuring debt, imposing these conditions on all creditors, both during voluntary arrangements (RDL 4/2014) and insolvency proceedings (RDL 14/2014). It is significant that secured creditors can also be forced to accept the conditions agreed, even if this affects their security interest. After RDL 4/2014, of note is how credit from restructured operations is handled for accounting purposes, as established by the Bank of Spain. After a refinancing agreement, debts are now classified as normal risk instead of doubtful, provided there are enough objective factors to guarantee they will be repaid and if there is a viability plan to ensure the business will continue in the short and medium term. This measure undoubtedly gives banks more incentive to reach an agreement with their debtors as it helps to improve their balance sheets.

In addition to the reform of the insolvency act, other actions have also been taken to improve access to financing. On
3 October, for example, the government approved a bill to encourage corporate financing that introduced, among other changes, obligatory advance notice of three months to cancel or reduce lines of credit to SMEs by more than 35%, as well as the obligation to provide SMEs with their payment record and internal rating.

With regard to the labour market, the focus has been on improving the effectiveness of active employment policies, an incredibly important element given the current situation. The government has decided to set up a system that allocates funds to autonomous communities depending on the effectiveness of these active policies. To this end it has established a series of targets (increasing the employability of the hardest hit groups, improving training quality, etc.) and indicators to evaluate performance. The results achieved will have a progressively greater influence on the funds being allocated. In 2014, 40% of the funds have already been distributed according to the rating given to programme performance in 2013, a percentage that will rise to 60% in 2015.

This reform represents an important step towards a system with more objective and transparent assessment of the active employment policies being implemented. Work should now focus on refining the indicators used to assess the effectiveness of such policies. On the one hand, finding a wide enough range of indicators to cover the whole spectrum required to make a complete assessment but narrow enough to ensure the overall rating is transparent (there are currently 26 indicators). On the other hand, it will also be important to increase the number of indicators that measure the success of policies carried out. In any case, this reform provides the ideal platform for active employment policies to play a leading role in the long-awaited recovery of the labour market. 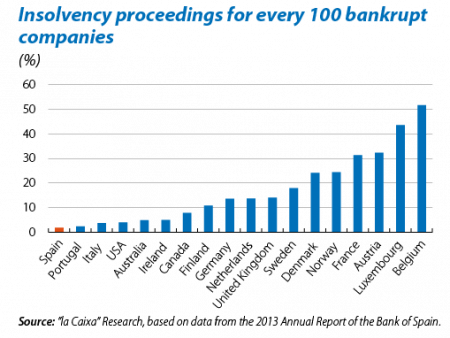