The technological revolution and slowdown in productivity

One of the distinctive features of the current economic context is the speed of technological progress. At least this seems to be the case, given the incredible advances being made in areas such as machine learning, self-driving vehicles and 4D printers, to name just a few. It would be reasonable to expect such progress to boost productivity. But this is far from being the case. In fact, productivity growth has actually slowed down significantly across most economies over the past few years. And this is crucial because an increase in productivity is precisely the key to people’s standard of living continuing to rise.

But before looking at this issue in more detail we should first determine exactly what we mean by productivity and especially how it can be measured. The widely used conceptual framework is the growth accounting model, initially developed by Robert Solow and Trevor Swan in the 1950s. Based on this theory, a country’s growth in economic activity results from its utilisation of the labour factor (the number of hours worked) or improvements in labour productivity (LP) or, in other words, increases in what each worker can produce in one hour.1

This theoretical framework also helps us to understand the determinants of LP. The capacity to produce more, without working more hours, depends on three key factors: the physical capital accumulated by an economy, its human capital and, finally, what economists call the total factor productivity (TFP). The first two factors are relatively minor. For instance, more machines or more education in general can increase an economy’s production capacity. In such cases, economists say that labour productivity rises due to a more intensive use of the physical or human capital, respectively (capital deepening). The third factor refers to technological or organisational improvements that result in a more efficient combination of capital and labour. One example is the institutional and legal environment, which is crucial for businesses to be competitive.

Equipped with a good definition and good methodology, we can now analyse the data. As already noted, what most measures of productivity reveal is a clear slowdown in the growth rate over the past few years, both in the case of LP and also TFP. There has been a notable change in trend. According to Conference Board data, global labour productivity has gone from 2.6% annual growth in the period 1996-2007 to 1.8% in the period 2013-2016, 0.8 pp less per year.2 The rate of growth for TFP has not only slowed down but, on average, has been negative for the past few years. It has gone from annual average growth of 0.7% to a decline of 0.2%.

A simple but illustrative exercise can give readers an idea of what this change in trend could mean, for example in the UK and US, economies where such a change has been particularly acute. If we assume that, over the next decade, each country’s LP grows at the same rate as the previous five years, at the end of this period their GDP per capita would be 21% and 18% lower, respectively, than it would have been if productivity growth had remained the same as the one in the period 1996-2007 (i.e. around USD 13,000 per year less in the US and around GBP 5,600 in the UK).3

This leads us to the second important feature of productivity growth’s change in trend: the fact that it seems to be synchronised, both in terms of geography and time. The past few years have seen a generalised slowdown in LP growth, both in advanced and emerging countries (see the first chart). There may be notable differences across countries but the change in trend is generalised. For instance, the aforementioned slowdown in the US and the UK is particularly acute among the emerging economies, clearly higher than in Germany or France. China stands out among the emerging economies, compared with India or Mexico.

However, the factors resulting in lower LP growth tend to differ across countries. In the US, for example, this is due to less support from both TFP and physical capital while a large part of China’s decline in LP growth is due to the change in trend in TFP. In particular, this has posted negative growth in the past few years after a period of considerable gains supported by the country becoming more open to trade and its integration within global value chains. In Germany, meanwhile, TFP growth rates have remained stable, albeit very moderate.

Having clearly shown that LP growth has not only not accelerated over the past few years but actually slowed down, the logical question is now why. This is tackled in more detail in the other articles in this Dossier but, as a taster, we can briefly review what has happened in the past few decades in the US. After moderate growth from the 1970s up to the mid-90s, US labour productivity gains rocketed and this situation continued for the next ten years. This period is known as the «productivity miracle» and it was supported by a sharp increase in TFP and also by increases in physical capital, albeit to a lesser extent (see the second chart).

The boom in ICTs (information and communication technologies) was key to this miracle. US firms were in a position to take greater advantage of these new technologies than the other developed countries (such as Europe’s economies), largely thanks to the country’s flexible labour market, its human and physical capital and the organisational environment of these firms. So it was not just the emergence of ICTs but the combination of these technologies with a favourable environment that produced the miracle.4

However, as already mentioned, LP gains started to drop off after the boom decade due to less support from TFP and capital investment. This slowdown started in 2005, before the outbreak of the huge economic and financial crisis of 2008, and continues in the US economy’s current expansionary phase.

As noted in the US case, the answer to the apparent paradox between technological change and LP lies in long-run structural factors but also, undoubtedly, in the effects of the great crisis. The following articles examine this in more detail, so please read on!

1. We refer to apparent labour productivity.

2. To calculate global aggregate figures, the Conference Board (Total Economy Database) counts labour productivity as output per employee instead of per hour worked, since many countries (especially emerging) do not provide hourly data.

3. It is assumed that the labour force and population remain constant. 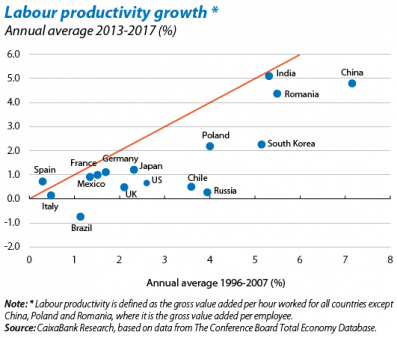 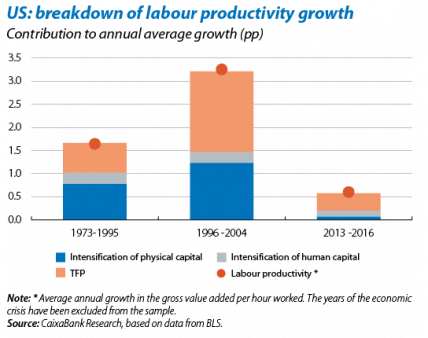