On 31 July, the United States' Bureau of Economic Analysis (BEA) published its GDP estimates for the second quarter, including the usual revision of the figures from the last few years. But this time it did something more, something it does every five years: a comprehensive revision of the GDP series, incorporating the latest economic census (2012) and the new benchmark input-output accounts (2007), as well as introducing significant methodological changes and updating the base year (from 2005 to 2009).

On average, these changes, applied to the whole series as from 1929, result in a higher level of GDP. In 2012, this figure increases by 560 billion dollars (+3.6%); to get a better idea, this would be the same as adding the whole of the Swedish economy, and then some. The main innovation lies in the calculation of capital goods investment, responsible for two thirds of this increase. Following the new UN recommendations for national accounts standards, NSA 2008, the old heading of Equipment and Software (7.2% of GDP in 2012) has been split into Equipment (6.0% of GDP) and Intellectual Property Products (i.e. investment in intangibles, 3.9%
of GDP). Intellectual Property Products include software and mining exploration (which before came under Equipment and Software), but also include R&D and artistic originals (entertainment, literary, etc.), previously considered to be intermediate goods. And as public corporation R&D is now included, government spending has also risen (104 billion dollars in 2012).

The rest of this increase is due to statistical improvements in the accounting of services (in particular banking services) and the change in criteria for calculating some pension plans (defined benefit), which are now accrual and not cash accounted (this change has also resulted in a revision of the series of disposable income, +2.3% in 2012).

Including Intellectual Property Products as investment not only alters the level of GDP but also growth. As these goods are closely linked to innovation (they boost economic growth and productivity), their secular growth is greater than that of the rest of the economy, so the average growth in GDP since 1929 has gone from 3.2% to 3.3%. Similarly, the GDP price deflator is now lower because the increase in the price of intangibles, which have a significant technological component, was less than the increase for all other goods. Between 2000
and 2012, the GDP deflator rose by 28% while that for Intellectual Property Products rose by 7%.

Looking at the short term, the new GDP figure reveals a somewhat milder recession than had been shown by the previous calculation and a rather more solid recovery, with growth for the whole of 2012 going from 2.2% to 2.8%. The savings and debt ratios have also improved, thanks to the higher GDP figure. The public deficit in 1Q 2013 went from 6.7% to 5.2% of GDP while, in the same period, gross public debt fell from 104.8% to 101.4% of GDP. On the other hand, more disposable income resulted in household savings in 1Q 2013 of 4.0% of this income, clearly above the previous estimate of 2.5%. 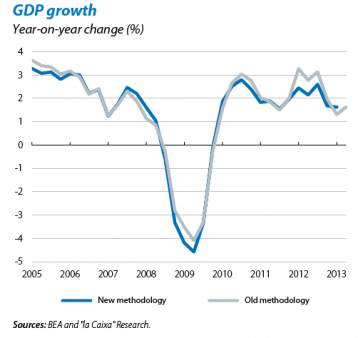 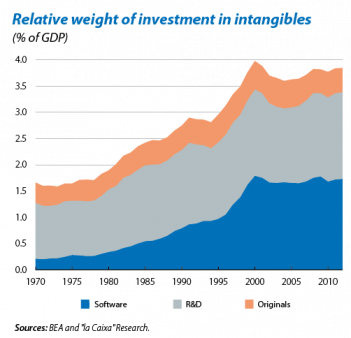