The curious case of rare earth: a non-crisis

In your new mobile phone, the chips of your computer, the LED light bulbs in your house and the engine of your next electric or hybrid car (depending on how ecological you are): no matter how surprising it may seem, «rare earth», a group of singular metals, already forms part of your everyday life. Apart from their growing importance for industrial applications, rare earth elements are affected by another remarkable fact: to date, mining has been confined to very specific locations, dominated by China. Even so, and in spite of the media frenzy, we are unlikely to see a rare earth «fever» or «war».

Scandium, yttrium and another 15 metals from the family of lanthanides make up the group of chemicals known as «rare earth elements». However, despite their name they are not earth and neither are they particularly rare as there is a large supply of them in the earth's crust and most had already been discovered and classified by the end of the 19th century. But, unlike other metals such as gold or silver which form independent minerals, rare earths are found in very low concentrations inside other minerals and are often mixed together, making them more difficult to extract and refine. In particular, these processes require large amounts of toxic acids, generating radioactive waste that is hard to control. Nor were these elements extensively used outside the laboratory until well into the second half of the 20th century but, in the last few decades, most rare earths have become essential inputs (albeit in miniscule amounts) of numerous high tech devices. Three areas particularly stand out: latest generation consumer electronics; the defense industry, especially communication systems related to missiles and drones; and the clean energy sector as they form part of the magnets used in engines for hybrid cars and in wind turbines.

Although the presence of rare earths in a large number of everyday products worldwide is a fact, their extraction is almost totally limited to a single country, China, with more than 90% of the world's production. This is a relatively recent supremacy since, at the beginning of the 1980s, the US was the main producer of rare earth thanks to Mountain Pass, a mine on the sunny Californian coast. However, growing competition from the Asian giant and a large amount of criticism regarding environmental safety led to the US mine being closed down in 2002. China's permissiveness in environmental terms is precisely what has given the country a firm advantage in mining rare earth elements since, as we have already mentioned, this is extremely toxic for the environment. In addition to this permissiveness there is also the fact that China's reserves of rare earth are very large (around 40% of the world's total), as well as having a public policy that has extensively supported the development of mining with huge investment and also low labour costs. In addition to being the main producer, China is also the world's biggest consumer of these elements, accounting for 70% of the total. Undoubtedly this is closely related to the leading role played by the country in «Factory Asia», one of the most integrated and extensive global manufacturing chains in the world, made up of numerous countries in South East Asia and specialising, precisely, in electronic products (see the article «China, at the heart of "Factory Asia"», in the Dossier in June's Monthly Report, 2014).

Given this dominant situation and the country's own strong demand, China has often been accused of abusing its position. In March 2012, Japan, the US and the EU jointly filed a complaint with the World Trade Organization (WTO) as a result of the rare earth export restrictions imposed by the Chinese government since 2010 (see the first graph), restrictions that, initially throughout 2011, led to a surge in the price of many of these metals in the international market. This was caused by stockpiling due to fears of subsequent (and perhaps tougher) restrictions by the Asian country (see the next graph). It should be noted, however, that China constantly justified its actions by the need to reduce the toxic emissions produced by extracting rare earth elements and to protect its environment. Certainly the country's dominance over the production of rare earth was based on numerous medium-sized and small mines that did not sufficiently meet the safety conditions to guarantee the toxic substances they produced were under control and should therefore be forced to close down. Whatever the exact, detailed reasons for these restrictions and although, this March, the WTO ruled on behalf of the plaintiffs, what is true is that, for four years now China and in particular its electronics manufacturers have benefitted from a lower price for rare earths (one of their production inputs), providing them with an edge over their foreign competitors.

A few months after the start of restrictions by China, prices returned to more moderate levels once it was realised that these limitations were not excessive. Nonetheless, the reactions came thick and fast. The US reopened Mountain Pass at the end of 2010, Australia started to increase its production in the west of the country and Canada has carried out numerous prospection projects, proving that the geographical distribution of the world's rare earth reserves extends beyond China's borders. For its part, Japan has strongly promoted the recycling of these metals, as well as research into their potential replacements; support that, last May, took an important step forward with the presentation of new batteries that, in addition to being economical, recyclable and high performance, did not contain rare earth.

In short, and although the future is still uncertain, we are unlikely to see further episodes of volatility in rare earth prices such as those observed in 2011. This argument is based on three conclusions. Firstly, China has shown no sign of insisting on restrictions to rare earth exports. Ultimately, some kind of understanding with the US, Europe and Japan is essential for the Asian country's own welfare as its high tech exports are consumed, precisely, by the citizens from these three markets. New mines opened far and wide across the globe will also help to stabilise prices. Lastly, technological breakthroughs look like reducing today's dependence on rare earth in producing advanced electronics and developing renewable energies. 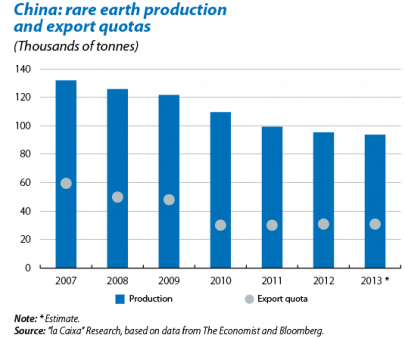 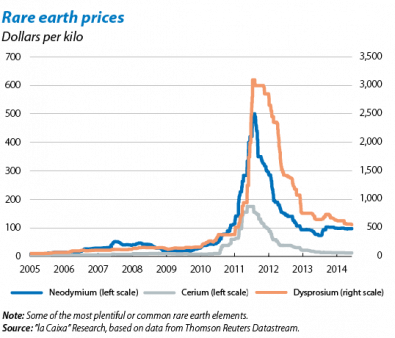