Has the commodity supercycle come to an end?

The trend in commodity prices has been widely discussed over the last few months, largely due to the sharp fall in oil prices but also because of the downward trend in the prices of many other commodities. After 10 years of significant gains (with the odd dip caused by the crisis), commodity prices have now generally fallen from their peaks (see the first graph) and, within this scenario of losses, the theory pointing to the end of the so-called «supercycle» for commodities is gaining strength.

The supercycle refers to the strong growth in commodity prices during the decade of the 2000s. Specifically, the commodity price index of the International Monetary Fund (IMF) rose fourfold between January 2000 and July 2008, just before the financial and economic crisis left its mark. Three factors supported this upward trend. Firstly, growing demand by emerging countries and especially China, whose growth rates have placed it at the head of international economic powers and whose imports of fuel and mining products have multiplied by 16 since the turn of the century. Secondly, the supply rigidities also brought about price rises. Lastly, low interest rates encouraged a search for yield in alternative assets such as the returns provided by commodities at the beginning of the 2000s.

However, the slowdown in China, faster than predicted a few years ago, and the economic shift the country is pursuing towards a consumption-led growth economy instead insted of export and investment-led (strongly linked to the demand for commodities) have fuelled doubts regarding whether the supercycle will continue. Resolving these is a complex task that goes beyond the scope of this Focus, whose aim is to highlight the sensitivity of commodity demand to developments in a few large emerging countries.

We've therefore focused on the typical per capita consumption of copper related to GDP per capita and have observed that this consumption increases as poorer economies develop, until reaching a peak of around 30,000 dollars per capita in purchasing power terms (see the second graph). From this point onwards per capital consumption of copper falls. This phenomenon is not surprising since, during the early phases of economic development, large investments in infrastructures result in a strong demand for this metal, widely used in construction. Nonetheless of note is the fact that, over the last few years, China's copper consumption has been higher than the usual figure registered by countries in a simliar stage of development. The Asian giant's model of growth has been characterised by a huge infrastructure drive. On the contrary, the copper consumption in Brazil, Indonesia and India has been below the standard pattern.

Should the current change in China's growth pattern have an effect on its copper consumption more closely in line with its development stage, demand for the metal could fall considerably which, in turn, would push its price down. But it is also true that Brazil, Indonesia and India could increase their consumption, offsetting the Chinese correction. These three countries are likely to increase their copper consumption not only due to the expected improvement in their per capita income in the medium term but also, and especially, because of their need to resolve existing bottlenecks in infrastructures. In fact, the IMF has stated that these bottlenecks are a pressing problem in Brazil and India (the world's second demographic power, approaching China's population of 1.3 billion). Consequently, according to our estimates Brazil, Indonesia and particularly India could offset around 70% of the fall in China's demand for copper. 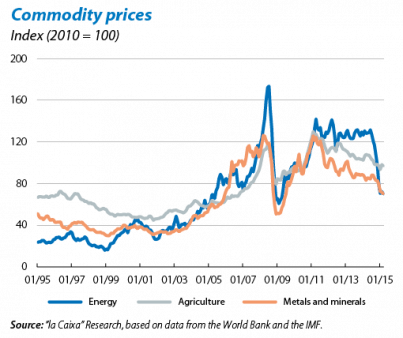 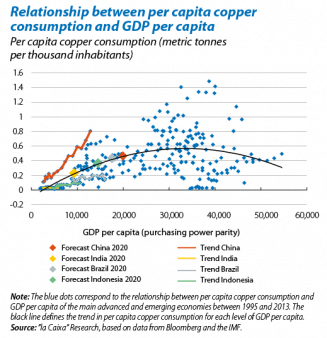 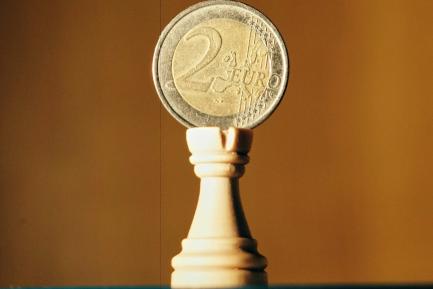