The slump in the price of crude oil at the end of 2014 came as very good news for households and for most companies in the main developed countries. However, although the price of black gold has remained relatively low, there has been a sharp upswing in its volatility, reaching levels not seen since the outbreak of the Great Recession. A brief review of the factors behind this increased volatility suggests this pattern will tend to continue, at least in the short term.

One initial source of uncertainty and therefore of this rise in volatility is the demand for oil. Specifically, in the last few years doubts have increased concerning the medium-term growth forecasts, particularly because of two factors: more uncertainty regarding the potential growth of economic activity in the developed countries and, at the same time, greater uncertainty regarding the intensity of growth in oil consumption. This second factor has become more accentuated in recent years with the emergence of new technologies and China’s shift in its production model which promotes the development of services in detriment to industry.

Although demand factors are important, and in spite of the fact that some of these have intensified in the last few years, they cannot really explain the sudden change occurring in the volatility of oil prices since 2014. We must therefore look for the reason behind this change in pattern in aspects of oil supply. Here the outstanding factor is the emergence of shale, a disruptive change in production technology that is evolving very quickly, therefore complicating its valuation by economic agents. Given the events since 2014, the effects of shale are much greater than had been expected and this has raised two questions that have yet to be answered: at what price is shale profitable and what strategy will the OPEC countries take to counter this new threat?

Regarding the first question, although no concrete answer has been found, in recent years shale producers have appeared to be more resistant to falling oil prices than initially expected. In spite of the fact that most sites are not considered to be profitable once the oil price goes below 65-70 dollars, several producers are achieving earnings at today’s prices and, in fact, investment is now starting to pick up again. This trend is consistent with recent analyses that suggest a profit threshold of around 60 dollars. All these questions undoubtedly fuel the rising volatility.

The answer to the second question largely depends on the uncertainty surrounding the price at which shale producers become profitable. The slump in oil prices occurred partly because Saudi Arabia decided to stop acting as a swing producer (adjusting its production to keep prices stable). The resulting increase in supply led to a large adjustment in price, intended to force shale producers out of the market.

However, after several quarters of low oil prices, now the OPEC countries also urgently need the price to rise as their public finances have deteriorated considerably. These opposing tensions; the desire to push shale producers out of the market without knowing the price at which they would be ousted, and the pressure exercised by low prices on their own public finances, are what have kept oil prices particularly volatile over the last few quarters.

That is why the agreement reached by the OPEC countries on 30 November in Vienna is so important. After a long time some of the questions are now starting to be answered. In this agreement, cartel members have undertaken to reduce their production by 1.2 million barrels a day, down to a total of around 32.5 million. It therefore seems that, after several quarters of tension between the different countries that make up the cartel, they have finally all agreed that a price slightly above the present one, albeit not too high, is the most beneficial for them.

In any case, given the fact that the economies of most of the OPEC members are quite weak, encouraging them to violate the agreement and increase their production, the uncertainty regarding the viability of this agreement will remain extremely volatile until it becomes clear it has been adhered to. To confirm this we will have to wait for the production figures to be published throughout 2017. Volatility is therefore guaranteed for some time yet. 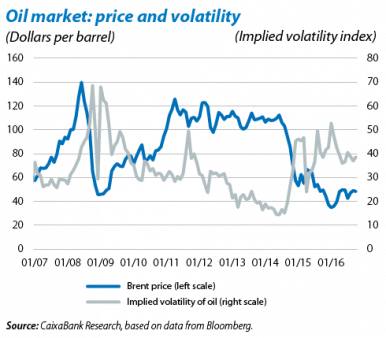