The major changes in relations between blocs that are taking place in 2022 are driving profound structural transformations in areas such as technology, defence and energy policy. Furthermore, gas, a key component of the energy transition, has recently become a political weapon, putting the many countries and industries that rely on this energy source on high alert. The EU is a net importer of gas, and its main suppliers have historically been those producers that are located the closest in geographical terms. In 2021, Russia was the EU’s biggest supplier, accounting for 40% of all gas imports. Imports from northern Europe (mainly Norway) and north Africa accounted for 30% of the total. On the other hand, imports of liquefied natural gas (LNG) from other sources accounted for the remaining 30% of imports in 2021.1

The recent escalation of tensions with Russia has led to gas imports from the country falling to a record low: in September, monthly imports from Russia stood at 2.8 billion cubic meters (bcm), 8.0 bcm below the figure for September 2021. This fall has been offset by an increase in LNG imports, which grew by 5.8 bcm compared to September 2021, while other imports remained stable. Overall, despite the 74% year-on-year drop in imports of Russian gas in September, total natural gas imports are just 7.4% below the level recorded a year ago (see first chart).

Nevertheless, despite the high degree of substitution achieved in 2022, the EU’s ability to import more LNG in the short-term is limited by a number of factors. These include the limited regasification capacity in northern Europe, deficiencies in the interconnection between EU countries (e.g. low connectivity with the Iberian Peninsula, where around 35% of the EU’s total regasification capacity is located), the limited global supply of LNG and the small number of LNG carriers available for transport.

Faced with a scenario in which imports of Russian gas are expected to remain no higher than their current record low,2 but also with the short-term substitution of imports approaching its limits, we can project the outlook for gas supply in Europe by incorporating into the analysis the current level of gas reserves and the pattern of consumption. 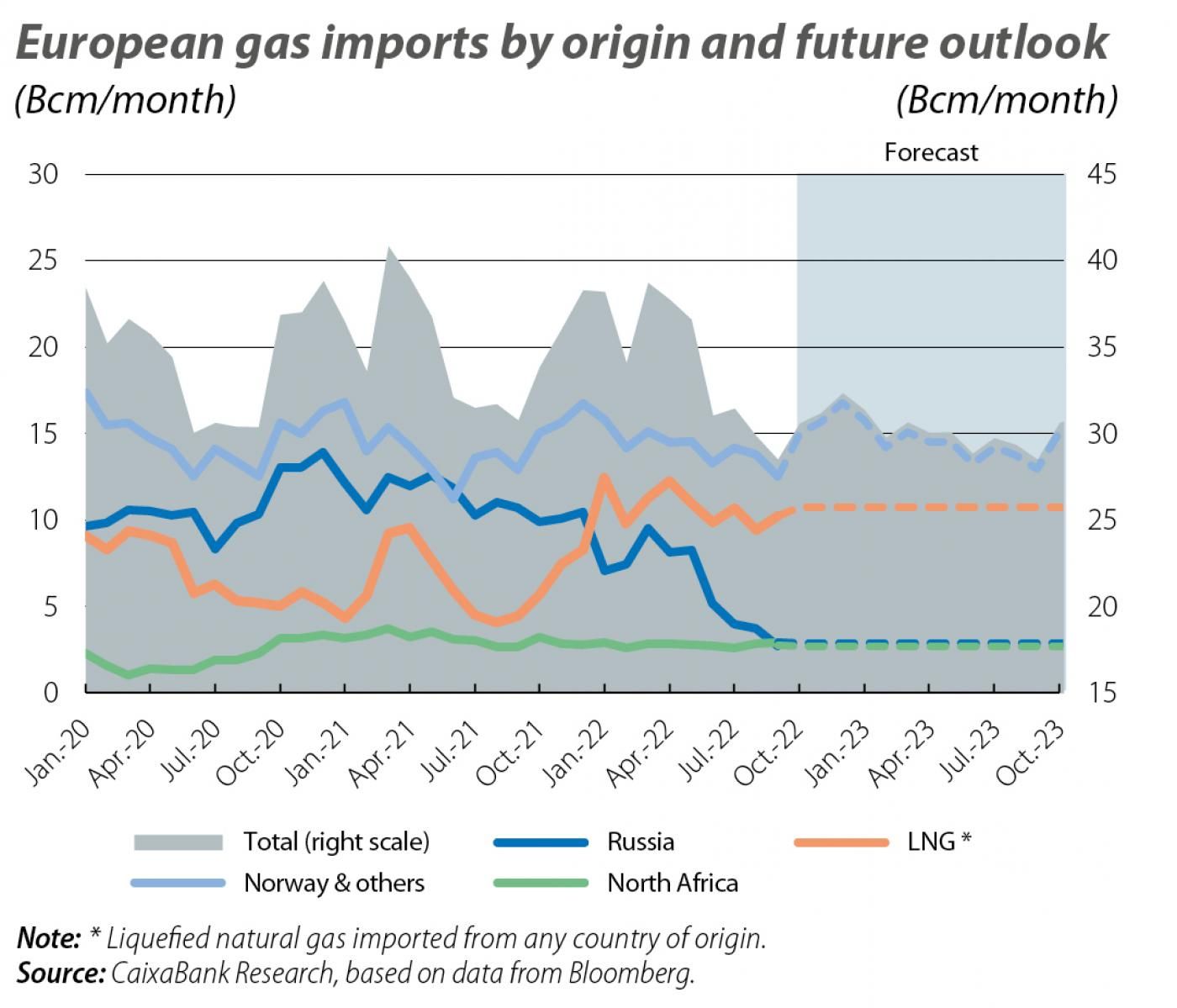 Gas reserves: how long will they help us endure?

As of the end of September, the EU’s reserves stood at around 90% of capacity, allowing for some cautious optimism. However, it is important to stress that the real room for manoeuvre is determined by what level of reserves are projected to remain at the end of winter, not before it like now. This is because gas imports during the cold months of the year are insufficient to cover the high demand for gas, so the reserves accumulated during the summer are also used. Historically, gas reserves peak at between 80% and 95% of capacity in October and fall to between 20% and 50% in March, depending mainly on the severity of the winter.

How far will Europe’s gas reserves fall after winter given the decline in Russian imports? Keeping consumption in line with the previous year (a recent peak) and other imports at the average level of 2022 (see first chart), we can see that the current reserves would not be enough to last the whole winter, resulting in energy rationing (the orange line in the second chart). Moreover, given the supply-side limits, this situation could still deteriorate looking ahead to the winter of 2023-2024.3 Therefore, in order to minimise the risks, it is necessary to propose measures aimed at reducing consumption, as the EU has done.

We will now analyse two additional scenarios, working on the assumption that, in the absence of any measures, the level of gas consumption would be the average of the last five years (excluding 2020). This is a way of assuming «average» weather conditions, which would be less extreme than those experienced last year. Next, we estimate what level of reduction in gas consumption or increase in gas imports would be needed in order to keep gas reserves within the safety range (i.e. close to the historical lows, denoted by the bottom of the grey band in the second chart), thereby avoiding serious supply problems or strict rationing measures.

In a conservative scenario where the EU fails to increase gas imports, we estimate that a 10% cut in gas consumption would be required. This is a figure that seems achievable as early as this year, given that in the first half of 2022 some of the biggest European gas consumers, such as Germany, the Netherlands, France and Poland, cut their consumption by more than 5% compared to the historical average. It is also below the 15% voluntary reduction in natural gas demand which Member States committed to last July for the period between August 2022 and March 2023.

On the other hand, in a more benign scenario in which LNG imports increase by 10%,4 this would be enough to keep European gas reserves within the safe range with just a 5% reduction in consumption. 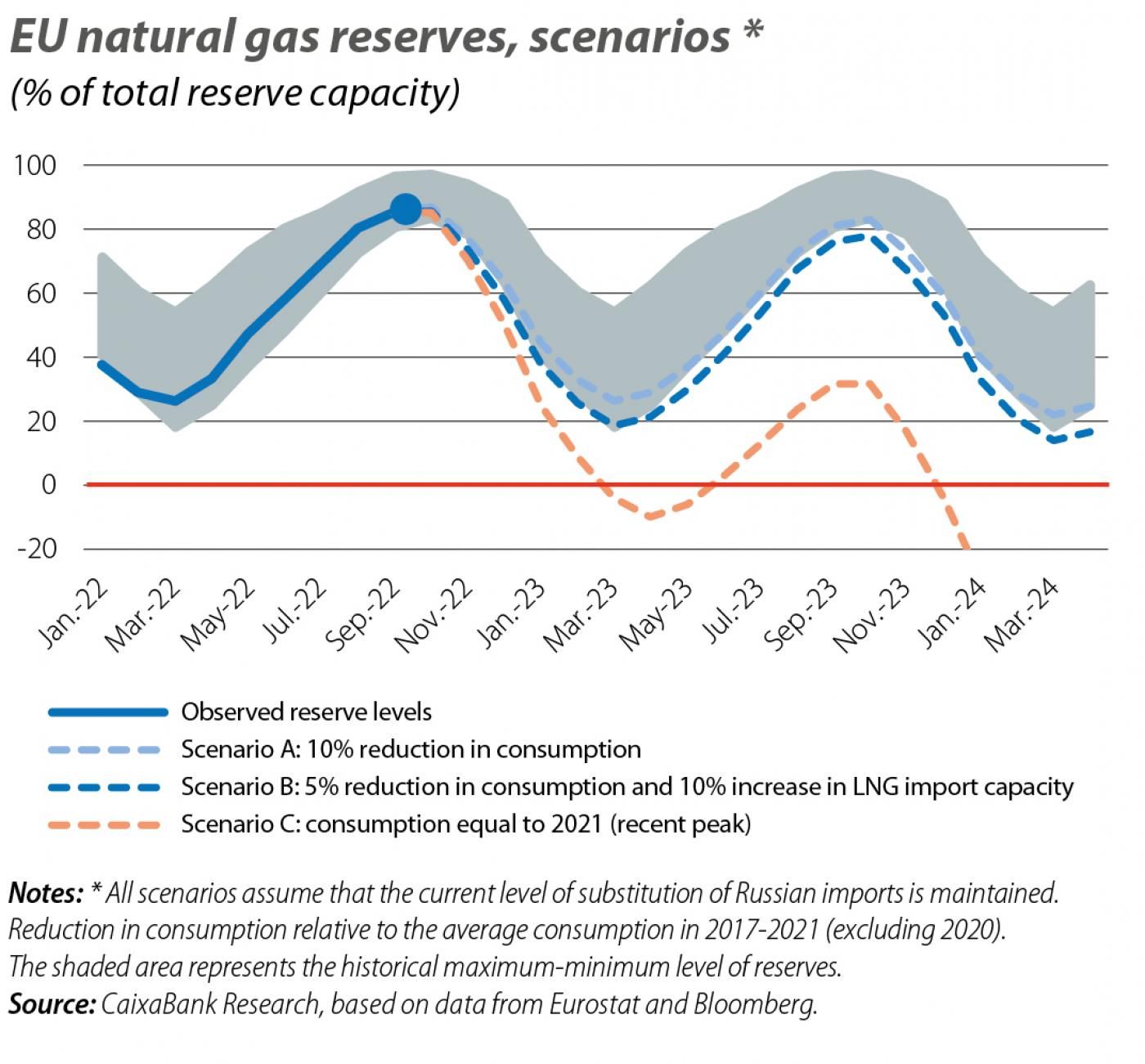 Reducing consumption: a differing task from country to country

However, the situation will not be the same for all Member States, as indicated in the analysis carried out by McWilliams and Zachmann (2022).5 The authors of this analysis look at what level of reductions in gas consumption would be needed in each country in a more severe scenario than the one we have used in this article (a complete cut off of Russian imports and lower substitution by other suppliers). Generally speaking, it is estimated that bigger reductions in consumption would be required in countries that are less well placed to substitute imports and which are more dependent on supplies from Russia. This group includes some Baltic and Eastern European countries, as well as Germany, which may have to make significant cuts in their consumption in order to maintain a stable level of reserves over the next two winters. On the other hand, countries with no access to the sea or low LNG import capacity, such as Poland or the Netherlands, may have to face reductions in consumption similar to those proposed by the European Commission. Finally, the countries that have been historically less dependent on Russian gas and which have greater LNG import capacity, including France, Italy, Spain, and Portugal, would find themselves in a more comfortable position over the coming winters without any need to reduce consumption, albeit with prices at historical highs.

A few months ago, Italy’s outgoing prime minister and former ECB president Mario Draghi asked his fellow citizens rhetorically whether they preferred «air conditioning or peace» in Europe. It is clear that, while the effort will be asymmetrical, in times of war Europeans will have to use heating as a defensive weapon. 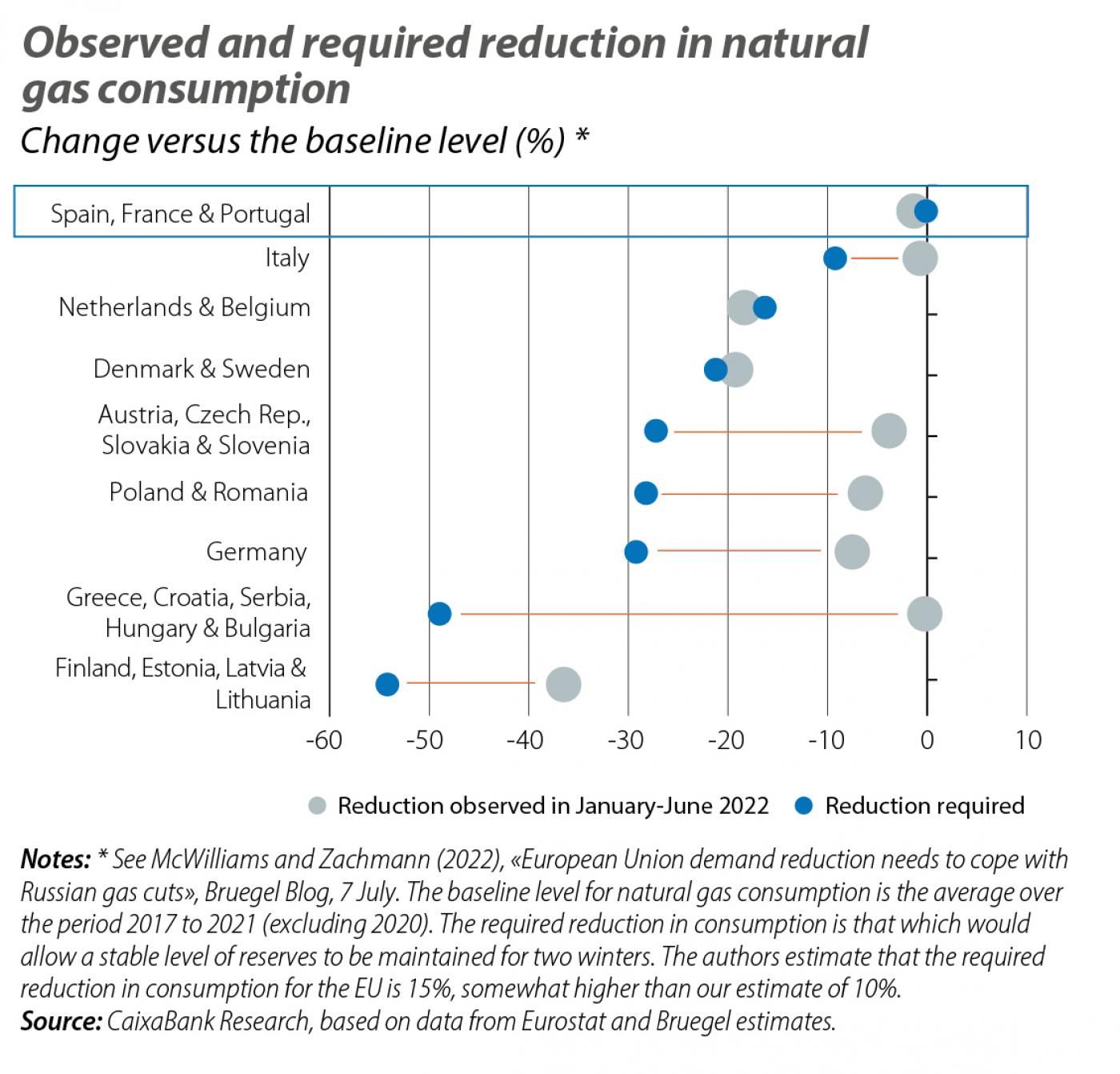