Brazil awakens the spectre of financial contagion in Latin America

Brazil has been in the firing line in the last few months due to its delicate situation, both political and financial. The recent uncertainty generated by China and unstable commodity markets, accompanied by Brazil's credit rating downgrade, has increased the downward pressure on the country's assets. With Latin America's turbulent financial episodes still fresh in the memory (the debt crisis in the 1980s, the «Tequila Effect» in 1994, the crisis of the Brazilian real at the end of the 1990s, etc.), the problems currently faced by the region's biggest economy are leading to fears of potential financial contagion to the rest of Latin America.

One difficulty in evaluating how easily Brazil's financial crisis could be passed on to the rest of Latin America via banking or capital markets is the lack of information on countries' relative exposure to each other that reflects the region's degree of integration. Taking this restriction into account, one indirect way of analysing the degree of financial interconnection is based on the trend in correlations between Brazil's financial markets and those of the region. Specifically, an increase in correlation coefficients during a crisis period suggests possible contagion, this normally being a necessary condition but not enough on its own. Recent evidence, however, shows how the correlation between Brazil and Latin America's equity and bond markets has tended to decrease, pointing to a relatively limited potential contagion (via purely financial channels) to other countries in the region (the effects via real channels and financial channels more closely linked to the economy, analysed in the Focus «Brazil in recession, contagion to Latin America?», also seem to be modest in scope). This conclusion becomes even stronger when we realise that, over the last few months, there have been other factors such as doubts regarding China and falling commodity prices that may have affected Latin American economies as a whole as well as their financial markets, increasing the correlations between these markets.

One additional exercise that could help to isolate the effect of Brazil's financial contagion to its neighbouring countries analyses the performance of markets on specific days when events have occurred with a high impact on Brazil's markets (so-called event studies). For example: on 9 September 2015, the day when Brazil's government bonds lost their investment grade status, and on 17 September 2015, when opposition parties filed a request to impeach President Rousseff. On these two days yields on the debt of the region's countries moved in a different direction to that of Brazilian sovereign bonds and actually fluctuated more in line with other emerging debt. This situation also suggests that financial contagion is weak.

In short, the evidence available is not indicative, in principle, of a high risk of contagion from Brazil to other countries in the region via the financial channel. However, it is important to remember just how unpredictable financial markets can sometimes be and to take into account the existence of tipping points or non-linear effects: there is no need to repeat the past. 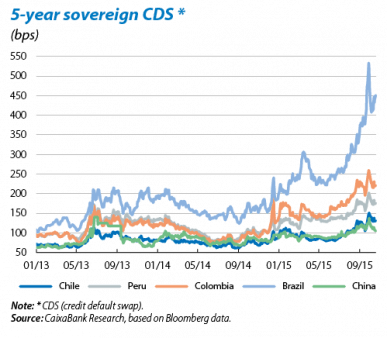 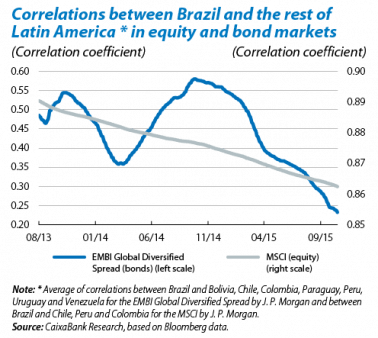