Can emerging economies withstand the US interest rate hikes?

Last December international investors reacted relatively calmly to the decision of the Federal Reserve (Fed) to start raising the federal funds rate. Even in emerging markets this news (which was actually expected) was generally received positively in spite of fears of the possible impact caused by this move towards more restrictive international monetary and financial conditions. Nevertheless, this initial reaction should not distract us from the challenges posed to emerging economies by an interest rate hike in the US, in particular the potential source of risk represented by their high level of debt.

In the last few years the highly expansionary monetary policies of the main central banks in the advanced economies, led by the Fed, have been accompanied, in a context of a search for yield, by a significant increase in debt in the emerging economies (see the first graph). The emerging bloc's total debt, which used to represent close to 150% of emerging GDP at the end of 2008, had reached 200% of GDP by mid-2015. A significant proportion of this increase has occurred in the balance sheets of the non-financial corporate sector, going from 60% of GDP in 2008 to close to 90%. Moreover the relative weight of corporate bonds in dollars is currently around 10% of GDP on average, a figure that might not seem very high but which is located within a concentrated universe of companies.

Under such conditions the hike in the US benchmark interest rate clearly has potential risks for the emerging economies. On the one hand it will tend to push up the value of the dollar, leading to an increase in the real value of emerging debt in local currencies. It will also push up interest rates in developing countries, increasing the costs of servicing debt in local currency and limiting the possibilities to refinance debt under sustainable conditions as it matures.

However, several elements suggest that these risks might be limited and not affect all countries equally. Firstly the increase in the benchmark interest rate started by the Fed had already been taken into account for some time and markets have gradually been adjusting since the «taper tantrum» of 2013 (interest rates on new issuances have been sliding upwards since then). Secondly the expected gradual nature of this cycle of hikes will provide economic agents with more time and flexibility to adjust to the new conditions. Moreover the tightening up of monetary conditions in the US is linked to an improvement in the US economy, which should benefit the emerging countries in general and particularly those emerging companies that are more dependent on exports to the US (probably those with the most debt in dollars).

Lastly we should not put all emerging countries into the same basket. For example, the significant increase in China's debt (see the second graph) and the high dollar exposure of Turkey's corporate debt are more cause for concern. Commodities companies, whose income in dollars has slumped due to the drop in prices of their sales, could also be a major source of vulnerability.

In summary the transition towards an environment of higher interest rates could certainly be accompanied by episodes of tension although this does not necessarily mean it will bring about a huge crisis. As shown in the recent upswing in aversion in the markets, elements related to the macroeconomic imbalances of the emerging economies, most particularly those related to the Chinese economy and the trend in commodity prices, will play a key role in the financial stability of these economies in the medium and long term. Even more so than what happens with US interest rates. 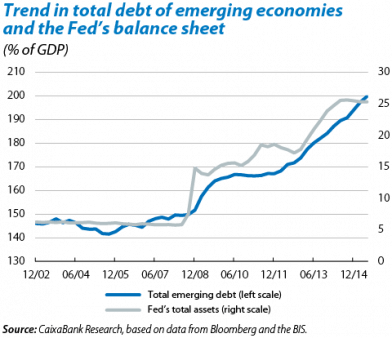 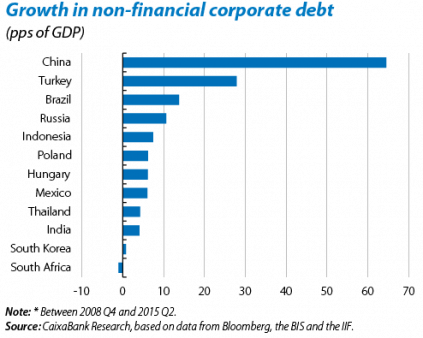