After remaining in the background during the years of financial crisis in the USA and debt problems in the euro area, the emerging countries have taken centre stage again. Unfortunately, for the worse. Reminiscent of the upsets seen in the 1990s, international investment flows are once again playing a crucial role.

Two types of factors lie behind the attraction of funds towards emerging economies. Firstly, «push» factors. When the global environment is one of abundant liquidity and low real interest rates, at the same time as risk appetite is increasing and «search for yield» strategies are being launched, the emerging markets usually come into their own as the investment of choice for international investors. Secondly, there are «pull» factors. If the emerging countries have good growth prospects, then capital arrives. Both factors played in their favour between 2009 and 2012 but have recently turned against them. Since last May, when Ben Bernanke stated that the Fed might start to reduce its rate of public debt purchases before the end of the year, US yields have risen significantly. This has encouraged investors to liquidate their positions in emerging assets and recompose their portfolios. The most visible consequence of this has been capital outflows from emerging regions, principally portfolio investments (both bonds and shares), together with sharp drops in currency exchanges rates.

It should be noted that not all emerging economies have been affected to the same degree. Those that are highly dependent on external financing (in terms of their current account deficit and net investment position compared with other countries) are the most vulnerable to flows of external capital coming to an end, leaving them exposed to crises of liquidity and even solvency. This is what has happened over the last four months: Brazil, India, Indonesia, South Africa and Turkey are among those countries under the greatest pressure due precisely to the considerable size of their external imbalances. The authorities of numerous emerging countries have adopted urgent measures to bolster their currencies. They have often resorted to raising the official interest rate and/or draining off liquidity to make investment in local monetary assets more attractive (as is the case of Brazil, India and Indonesia). Some (for example Brazil) have intervened in the foreign exchange markets, selling off part of their dollar reserves or using other measures. Lastly, there have also been cases of capital controls being put in place (for example India).

However, the measures being deployed do not seem to be having the desired effect, at least at present, as turbulences have reappeared in the currency markets after the respite observed at the end of July. The economic authorities are therefore facing a considerable challenge. One alternative is to wait and hope that international investors will soon calm down, something that will be more plausible if the Fed surprises us with decisions and messages that are «gentler» than the ones recently announced. This could certainly happen but only temporarily as the underlying dynamic of the US economy indicates that the process of monetary normalization is inexorable and the Fed does not seem to be very sensitive towards problems outside its own borders. One second course of action is to intensify the emergency measures. The problem is that these are not necessarily effective and might also cause unwanted side effects (depressing domestic demand, damaging the country's reputation as a place to invest, etc.). There is a third, more advisable option in the majority of the problematic cases: decisively carrying out structural reforms to strongly activate the «pull» factors. Countries such as India and Brazil are paradigms of this type of advisable measures: liberalizing markets, de-indexing the economy, sorting out and modernizing the public sector, etc. Embarking on this path will result, perhaps slowly but undoubtedly surely, in regaining capital flows, achieving financial stability and consolidating economic progress. 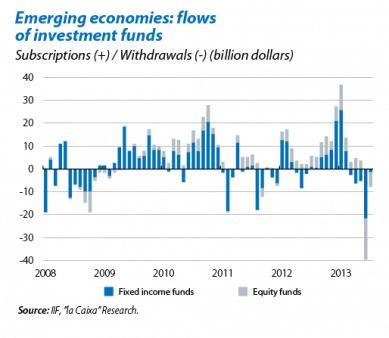