Doubtful tone after an upswing in risk aversion

The international markets are going through a period of moderate turbulence originating in the emerging regions. After the outbreak of the Argentine peso crisis, financial tension moved on to other emerging regions such as Brazil and Turkey. Although the environment is still fragile, the action taken by central banks has helped to contain the impact on the emerging region's risk assets, this being less virulent than the effect observed during the summer sell-off. Given this situation, developed financial markets have not been seriously affected although the convergence of various risk factors could result in moderate corrections in the short term, particularly in stock markets. Nonetheless, we believe that any setbacks arising related to the emerging countries will tend to diminish in intensity and frequency, helping to reinforce the constructive situation in markets at a global level.

The episode of tension in the emerging countries is becoming markedly selective in scope. Currencies have once again been hardest hit, especially the Russian rouble, Turkish lira and South African rand, although all of them have reversed their losses against the dollar except for Russia's currency. However, and unlike what happened last summer, there are two important distinctions to be made. Firstly, investors are increasingly discriminating between those countries committed to implementing reforms in order to correct their macro imbalances and those showing less willingness to do so. In this respect, India and Brazil represent a clear example
of these two types: the Indian authorities have managed to stabilise inflationary pressures and the current account deficit while the opposite is true in the Latin American country. Secondly, the resurgence of tension regarding the emerging financial situation is more the result of local factors, reinforced by socio-political events in the Ukraine and Turkey, rather than external factors (such as tapering).

Unfortunately, this instability in the weakest links cannot be deemed to be over. Although investor sentiment has improved recently, aversion is still high. Three sources of
risk stand out in particular and should not be ignored: (i)
all the «BIITS» countries are facing elections this year, which could delay the implementation of necessary reforms; (ii) sudden upswings in US yields, resulting from a hypothetical readjustment in expectations regarding monetary normalisation; and (iii) a possible worsening in activity
figures for the Chinese economy, which would have powerful implications for the emerging economies as a whole. In spite of all this, we still rule out any episode of systemic scope such as the one occurring in the 1990s as the current underlying fundamentals in macroeconomic and corporate terms are much more solid than before.

Meanwhile, the Fed will keep to its policy of gradually reducing stimuli. We expect tapering to occur at a rate of
10 billion dollars less every meeting, with this rate tending to speed up. At the same time, the minutes from the institution's last meeting revealed diverging opinions among Committee members regarding forward guidance on interest rates. The fall in January's unemployment rate to 6.6% has led to talk
of new qualitative variables being introduced, or existing variables being modified, as Yellen herself pointed out that
the improvement in the labour market was far from complete. However, this represents a considerable challenge as well
as a probable source of instability (see the Focus «Janet Yellen: expected continuity at the Fed?»). It is therefore extremely important for the Fed's communication policy to be clear
and credible.

Calm in the US government bond market. The progressive fall in monthly debt purchases has been accompanied by
low levels of implied volatility. The agreement reached on
the fiscal front to postpone the debt ceiling to March 2015 undoubtedly lies behind the calm tone of the sovereign debt market. The yield on 10-year bonds is around 2.75% after
the episode of emerging tension and the bad news provided by cyclical indicators. The upward trend observed in treasury yields will become even greater once the weak activity
figures fade, affected by temporary factors (particularly adverse weather conditions) and as tapering progresses. Paradoxically, stronger signs of growth or inflation could
give rise to sudden upswings in yields due to the readjustment of agent expectations if there are doubts regarding the Fed's intentions.

The episode of tougher interbank rates in the euro area is subsiding without any explicit intervention being required
by the European Central Bank (ECB). The institution's repeated willingness to intervene in markets should it observe further upswings in tension is helping to contain expectations of rises in monetary rates.

However, fears are growing of a possible period of deflation. The markets have tended to focus on the deflationary risks facing the euro area in the current context of incipient recovery (see the Focus «The ECB's arsenal: slingshots
and bazookas»). The fifth consecutive posting of inflation below 1% year-on-year, as well as depressed long-term inflation expectations, reflect the weak dynamic of prices. Consequently, a considerable portion of the market is ruling out the adoption of unconventional expansionary measures, already for the next ECB meeting. Mario Draghi himself stated that, in spite of the solid anchoring of inflation expectations
in the medium term at around 2% and the absence of any
firm signs of deflation, «persistently low inflation poses
a threat to the recovery». However, inflation is more likely
to pick up thanks to the slow but steady improvement in domestic demand. The ECB will therefore only decide to act
if its inflation forecasts, which will be published in March, reflect significant deterioration.

New impetus for periphery public debt, showing commendable resilience. Moody's announcement that it was raising Spain's debt rating to Baa3 and giving it a «positive» outlook occurred after improving the outlook for Italian debt. This decision, which is helping to boost optimism regarding periphery sovereign risk, is due to many different factors, particularly the correction of imbalances, the improvement
in external competitiveness and the sanitisation of Spain's banking sector. The favourable situation in periphery
bond markets, reflected in sustained falls in debt yields, is endorsed by two elements. Firstly, the positive tone shown
by cyclical indicators as a whole. Secondly, the very solidity
of the progress being made by periphery debt, which has successfully handled two events: (i) the resignation of the Italian Prime Minister, Enrico Letta, and the formation of
a new government and (ii) the objections by Germany's Constitutional Court to the ECB's OMT programme. However, there are still considerable risks associated with excessive complacency on the part of governments and the efforts being made regarding reforms and consolidation must continue.

Mixed news in the stock markets with high levels of over-buying. European and US stock markets have regained the ground lost after last month's correction. US stock market indices remain at an all-time high, supported by corporate earnings within the high range of forecasts: 69% of the earnings reported were above forecast. Although the earnings campaign in Europe is not as clear-cut as the one on the American continent (with 52% of the earnings reported above forecast), Eurostoxx has also joined this favourable trend.
The opposite to this situation can be found in the Ibex, which has not managed to overcome the losses accumulated during the emerging episode. Although we still believe that stock markets in the developed block are likely to see gains, the impetus has weakened and recent fluctuations in these markets form part of a moderately intense correction that
has yet to come to an end.

The euro-dollar exchange rate has been affected by the disparity of cyclical indicators on both sides of the Atlantic, reaching 1.37 dollars. Fluctuations within the range of
1.30-1.35, as in the last few quarters, will be the dominant tone, with a slight tendency for the dollar to appreciate. The yuan has lost value against the dollar after the Chinese central bank intervened in the foreign exchange market. Brent oil
has shown notable stability during the stressful episode for the emerging region, remaining below 110 dollars/barrel. Those commodities with a larger cyclical component were livelier, particularly food, influenced by cyclical factors restricting their supply. 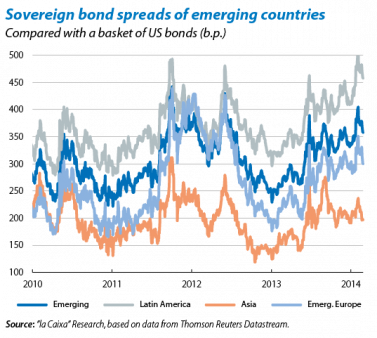 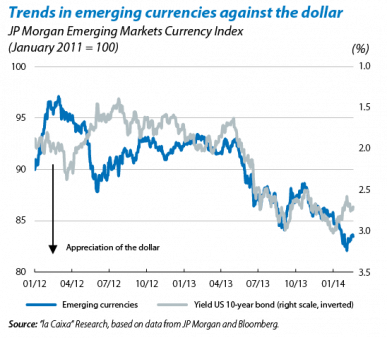 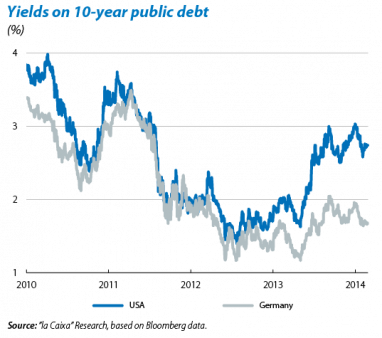 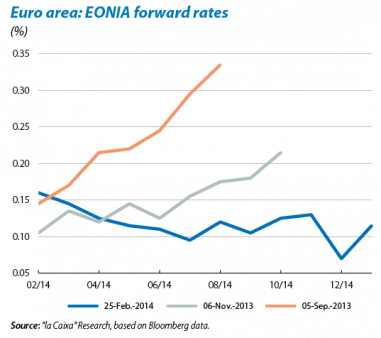 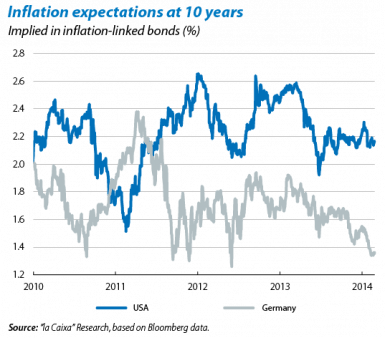 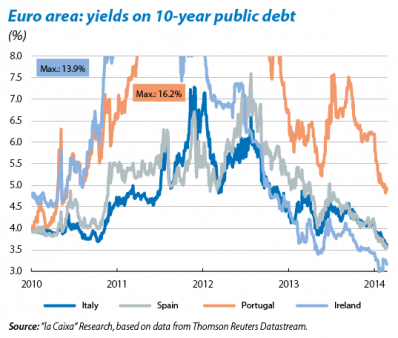 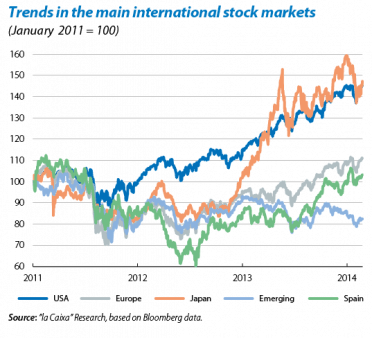 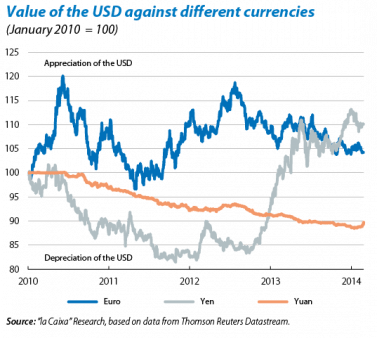