Financial defragmentation in the euro area: still some way to go

The financing terms in different countries of the euro area are gradually converging. One example of this is the narrowing spread of interest rates on new loans of under one million euros, the most widely used by SMEs, between core and periphery countries. According to the most recent data from October, the interest rate was, on average, 4.6% in the periphery (4.2% in Spain) and 2.7% in the core, a spread of 2.0 pps (see the first graph). At the peak of the euro area's sovereign debt crisis, this spread reached just over 2.7 pps. The announcement of the OMT programme1 in summer 2012 by the ECB, together with its commitment to do whatever it takes to ensure the euro would survive, marked a turning point and stopped the fragmentation from getting any worse. Since then, notable progress has been made in the reintegration process. Improvements can be seen in many segments: yields on sovereign debt for peripheral countries are now at an all-time low, interest rates on corporate and bank bonds have substantially converged and transnational financial flows are less fragmented. However, the differences between countries are still significant, especially when compared with lending conditions before the sovereign debt crisis, when the interest rate spread was practically zero
and credit flowed more easily between countries.2

This convergence must therefore continue. Once again the ECB is bound to play an important role. The measures it has announced over the last few months should help to ease monetary conditions in the euro area even further. However, the tepid welcome shown for the first two TLTROs (targeted long-term refinancing operations) and purchases of asset-backed securities (ABS) and covered bonds indicates that they might not be enough to achieve this aim.

The improvement of growth prospects in the periphery has also helped to reduce financial fragmentation. Over the last year analysts revised upwards their growth forecasts for 2014 and 2015 for the periphery countries, including Spain (see the second graph). The economic recovery of these countries has helped to improve the credit quality of those asking for loans and consequently a relaxation in their conditions of access.

Beyond the boost provided by monetary policy and growth in the short and medium term, it is vital to make further progress at an institutional level in order to achieve long-lasting financial integration. Very positive factors in this respect are the advances made towards banking union, both in supervision and resolution. This new architecture has helped to boost the credibility of the banking sector and break the link between bank and sovereign risk, the initial cause of financial fragmentation. But this is not enough. In a monetary union it is essential to set up mechanisms to improve the coordination of economic policies and to effectively share risk, mechanisms which, for them to be legitimate, must be accompanied by a greater degree of political integration. In short, in order for credit to flow again under equal conditions in all economies of the euro area, it is necessary to continue advancing towards real economic and monetary union, as established in the roadmap agreed at the height of the sovereign debt crisis.

2. Nonetheless, some difference is likely to persist even at equilibrium level. 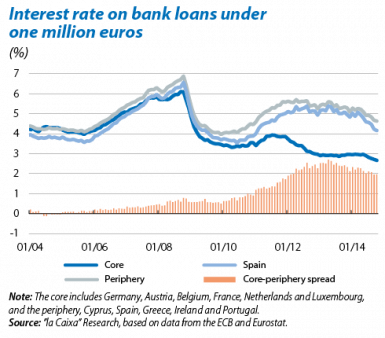 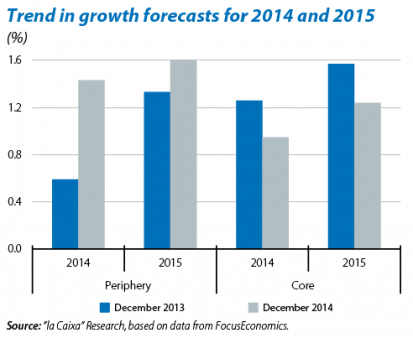