The financial markets end a year marked by volatility

The year ends with concern among investors. The financial markets have experienced an intense 2018, with various episodes of stock market corrections, a gradual increase in risk premiums on corporate debt, repeated spikes in sovereign risk premiums in the euro area periphery, the strengthening of the dollar against the main advanced currencies and, especially, the main emerging currencies, as well as significant volatility in the oil price. All of this has taken place in an environment of heightened geopolitical and trade tensions, coupled with the withdrawal of monetary policy stimulus, resulting in the environment of very low volatility of recent years being left behind. This change of panorama has been particularly noted in the equity markets, where the major stock market indices have suffered their worst year since 2009-2011, with cumulative declines of close to –15% for the year as a whole. In the fixed-income markets, meanwhile, sovereign interest rates have also been highly volatile, driven by political tensions, the Fed’s trend of rate hikes and fears that the global economy could slow down more than expected in 2019. These dynamics were particularly felt in December, when the Fed’s fourth rate hike in the year combined with the end of the ECB’s QE, further losses in the stock markets, a marked decline in sovereign interest rates (with investors barely anticipating any new reference rate hikes by the Fed in 2019) and a renewed decline in the oil price.

Volatility persists in the international stock markets. In December, the international stock markets suffered a new surge of risk aversion and closed the last month of the year in negative. The main trading floors began the month with a somewhat hesitant tone, but it turned pessimistic after the Fed confirmed the fourth rate rise of the year. As such, the VIX index (a volatility indicator) surged to levels not seen since the corrections of February, while the stock markets of the advanced economies suffered widespread and significant losses. In particular, the main US indices lost almost 9%, while in the euro area the falls amounted to around 6%. On the other hand, the MSCI index for the emerging economies as a whole fell more moderately, although losses in the emerging bloc were also widespread across the Asian and Latin American trading floors (with declines of close to 3% and 1.5%, respectively).

The Fed raises interest rates for the fourth time in 2018 and the ECB confirms the end of QE. As expected, at its last meeting of the year, the Fed increased the target reference rate by 25 bps, bringing it up to the 2.25%-2.50% range. Thus, with the four rate rises accumulated in 2018, in addition to the three that took place in 2017, US monetary policy has ceased to be accommodative and is entering into a more neutral territory in relation to the business cycle, where it is likely to remain in 2019: according to their latest forecasts, the members of the Fed expect two rate hikes in 2019, in line with the scenario foreseen by CaixaBank Research. The ECB, meanwhile, confirmed the end of its net purchases of assets and reiterated its intention to keep interest rates unchanged until, at least, after the summer of 2019. In addition, it recalled that it will remain present in the markets for a long time by reinvesting the assets on its balance sheet as they reach maturity. This is a strategy that, according to the ECB, will continue to be governed by the so-called capital key (each country’s relative contribution to the ECB’s internal capital) and the principle of market neutrality (such that the reinvestments match the average maturity profile that exists in the secondary market). In this way, despite the net purchases of assets coming to an end, the ECB will maintain an accommodative monetary policy throughout 2019.

Sovereign interest rates fall, while the dollar remains strong. The turmoil in the stock markets, together with a certain scepticism among investors in relation to the Fed’s future reference rate hikes, pushed sovereign interest rates down in the US and Germany. In addition, of particular note in the US was the flattening of the sovereign yield curve, with the differential between 10-year and 3-month rates lying below 40 bps for the first time since 2007. On the other hand, in the euro area, the peripheral risk premiums reacted with optimism to the agreement reached between Italy and the European Commission on the Italian budget for 2019 (see the section on International Economy), and in the case of Spain and Portugal, the risk premiums fell back to the levels seen at the beginning of the year. This improvement in sentiment was also noted in the foreign exchange market, where the euro appreciated against most of the advanced economy currencies over the course of the month. In the United Kingdom, meanwhile, the accentuation of the uncertainty surrounding Brexit penalised the exchange rate of the pound (–1.3% against the euro). Finally, in the emerging economies, the currencies fluctuated moderately – and somewhat disparately – against the dollar.

OPEC and its partners agree on a joint cut in oil production. Following the collapse in the price of a barrel of Brent oil in November, on 7 December OPEC member countries and their partners (such as Russia, Kazakhstan and Mexico) announced a joint reduction of 1.2 million barrels a day in their crude oil production (compared to the levels produced in October 2018). The production cut is part of a deal that will begin to be implemented in January 2019 and will initially last for six months. However, the announcement was received with ambiguity in the markets. After a few sessions of indecision, the price of a barrel of Brent oil ended up falling in December for the third consecutive month, reflecting investors’ fears that there will still be an excess supply of crude oil in 2019. 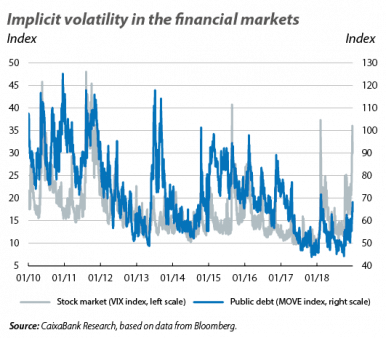 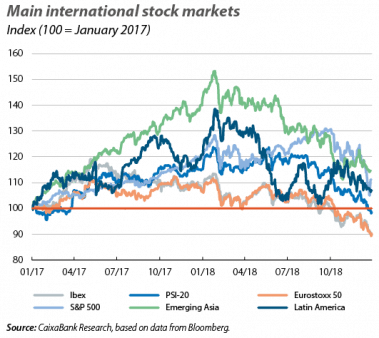 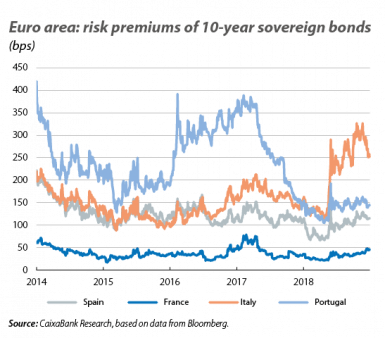 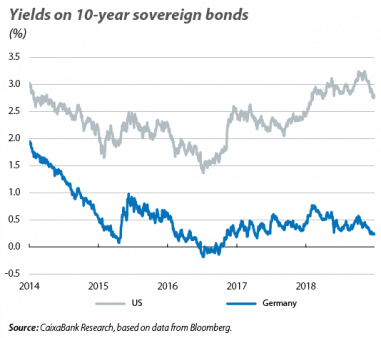 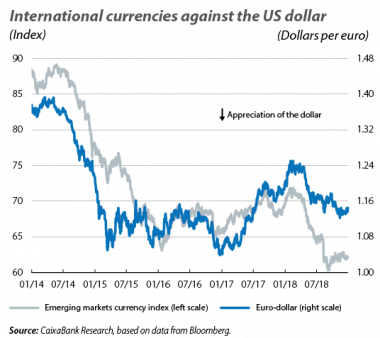 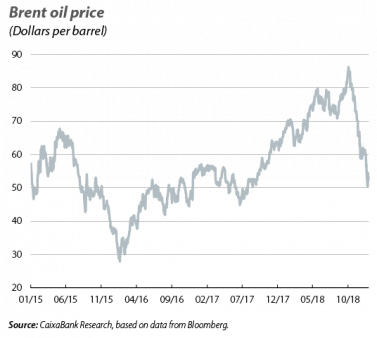